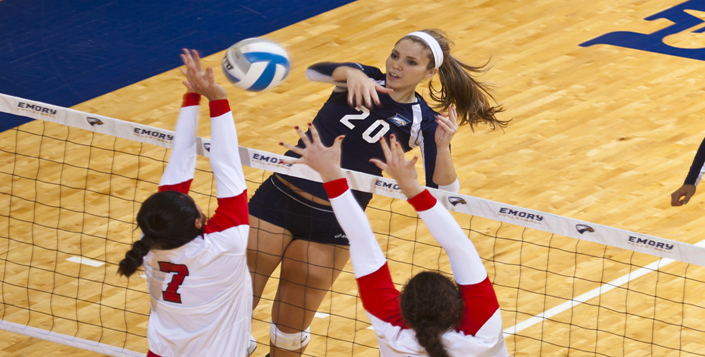 “This was probably our most competitive tournament of the year,” sophomore outside hitter Leah Jacobs said.

California is known as a talent pocket for volleyball, and many Emory players call it their home state.

“I told [the tournament officials], ‘Give us the four top teams there.’ Every team we played was in the Top 25,” Head Coach Jenny McDowell said.

Although the Eagles only graduated one player, who did not start in 2013, players had to step out of their comfort zones this weekend.Senior Kate Bowman was the most obvious, leaving her normal position as outside hitter and playing libero.

“After a disappointing loss the weekend before at the Berry College Invitational tournament, we knew we needed to change something,” Bowman said.

This was the first game in which Bowman played as a libero.

“Being able to make that change and play at an exceptionally high level was a major game changer for our team,” McDowell said. “[Her versatility] showed why she’s one of the best athletes in the country.”

As a captain, Bowman was ready and willing to do whatever she had to for the team.

“We needed her leadership in the back row. Kate has so much intensity and was a great leader there,” Jacobs said.

Sophomore Kathryn Trinka took Bowman’s usual place as an outside hitter and sophomore Shannon Nugent stepped up and played for senior Cat McGrath, who is out with a stress fracture in her foot and Bowman contributed the squad working on communication team energy to the Eagles’ recent success

“Focusing on those two things was successful because it made our team more cohesive from the back row to the front row. And all around, the team played as one unit,” she said.

The Eagles’ consistency will be tested this weekend starting on Friday, Sept. 12, when they host the Emory Classic at the WoodPEC. They face off against Transylvania University (Kentucky).

“Now the key for our team is to come back to practice tomorrow,” McDowell said.