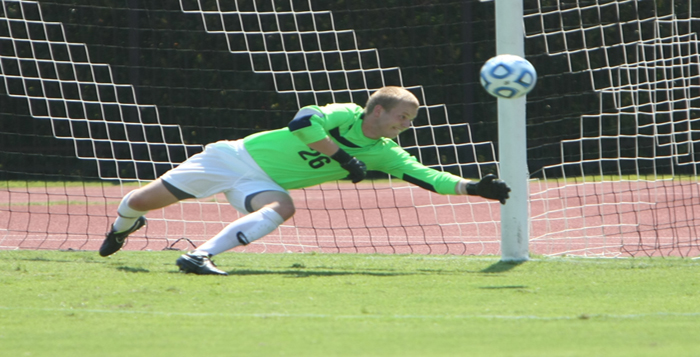 The men’s soccer team continued their hot start to the season, sweeping the Berry Invitational to run their record to 3-0-1. The 24th-ranked Eagles shut out the Ohio Northern University Polar Bears 3-0 on Saturday before edging the Ramapo College (N.J.) Roadrunners 1-0 on Sunday.

Ohio Northern entered the game as the 14th-ranked Division III squad in the nation, but the Eagles went shot for shot with the Polar Bears early.

Emory pulled ahead in the 15th minute of play with a header from sophomore Jason Andrejchak off a pass from senior Dylan Price. It was Andrejchak’s first goal of the season after he knocked in five in 2013.

“The trip was good for team-building. Everyone was very excited and it’s a great start to the season,” Andrejchak said.

Freshman Austin Mirabella followed suit in the 37th minute, scoring his first goal of his Eagles career to give Emory a 2-0 advantage heading into the half.

It didn’t take long for the Eagles to put the game away after the intermission, this time on the foot of a different freshman.

Jason McCartney won the ball off a corner kick from Andrejchak in the 47th minute and knocked in another goal to make the deficit a near-insurmountable 3-0.

It was the first shutout of the young season for the Eagles’ defense, who were led by junior Abe Hannigan in goal.

Hannigan finished with four saves on the day. Andrejchak and Mirabella led the team with three shots apiece, while Price, McCartney and junior midfielder Nick Schook all had two. Emory outshot ONU 15-9, including a 7-4 advantage in shots on goal.

The Eagles’ game against Ramapo proved a bit more competitive. Andrejchak once again scored first for the Eagles, this time off a pass from Sebastian Hardington in the 41st minute of play.

Hardington, a junior forward, earned his first assist of the season.

The rest of the game offered no more scoring, but no shortage of suspense.

After a lightning delay before the start of the second half, the Eagles’ defense did a fine job of protecting their lead, letting up only two shots for the remainder of the contest. Hannigan earned another shutout and finished with two saves, both in the first half.

Despite the close score, the Eagles dominated the stat sheet.

Emory had 13 shots to Ramapo’s six, and earned a 4-2 advantage in shots on goal.

Andrejchak and Price once again were the main catalysts on offense, combining for over half of the team’s shots.

“We have a really good team and a lot of really good freshmen. Hopefully we’ll make a run again this year,” Andrejchak said.

The Eagles will try to preserve their unblemished record yet again at 7 p.m., Wednesday, Sept. 10, when they host Covenant College at the WoodPEC.