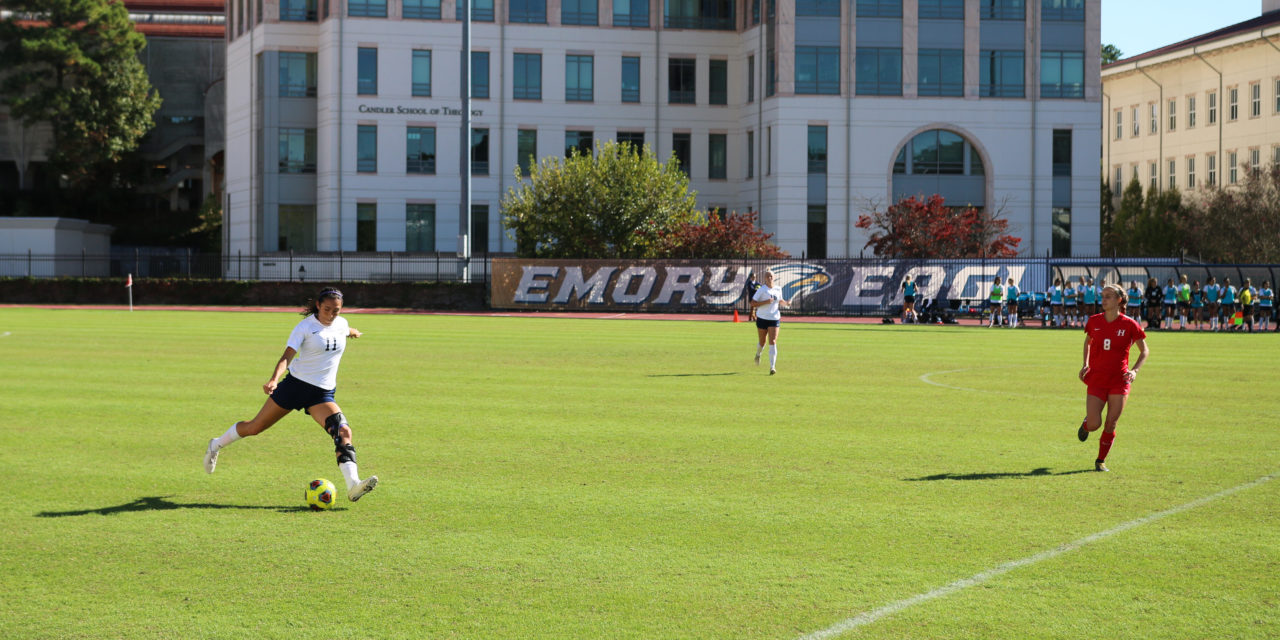 The Emory women’s soccer team brutally defeated the Huntingdon College (Ala.) Hawks in a decisive 10-0 win on Oct. 27, boosting their overall record to 10-4 and extending their win streak to three games. The season-high 10 goals marked the 10th double-digit goal game in school history for the Eagles and the first since Oct. 22, 2006.

Emory slotted five goals in the back of the net in each half and finished the match with a 37-1 margin in shots. Eight Eagles contributed to the scoresheet, including freshman forward Natalie Klar, who recorded her first multi-goal game with goals in the 40th and 48th minutes. She now leads the team with eight goals this season.

In the first half, sophomore midfielder Arielle Williamson netted the first goal of the game in the fifth minute, her second marker of the year. The opening goal was then followed by senior forward Caroline Kolski in the 14th minute, senior forward Shivani Beall in the 23rd minute, freshman forward Aubrey Blanchard in the 32nd minute and Klar’s first goal of the game.

Heading into the second half with a 5-0 lead, Klar capitalized on her stellar performance with her second goal before sophomore midfielders Lindsey Breskow and Lauren Mahoney each contributed beautifully-placed headers into the back of the net 32 seconds apart in the 61st and 62nd minutes.

A Huntingdon own-goal followed in the 67th minute, putting the Eagles up 9-0. In the 86th minute, freshman forward Sydney Rosenkrantz sealed the double-digit win with a goal rebounded off a shot attempt by junior midfielder Kelly Walsh.

“Scoring 10 goals really speaks to our focus as a team,” Mahoney said.

Williamson added on to this sentiment, citing the team culture and intensity.

“My teammates and I are most proud of the fact that we didn’t let our playing style or level be impacted the entire course of the game,” she said. “From start to finish, we played with intensity and heart with each person individually making an impact on the game. This supportiveness and cohesiveness, specifically this year, has made us flourish so far this season,” she added.

“We took care of the ball in possession, finished chances on goal and didn’t have any mental lapses defensively,” Patberg said. “It was a total team effort.”

Patberg believes the team can secure a win this weekend if they make some adjustments.

“We will have to increase our speed of play, find ways to create scoring opportunities and convert those efforts to goals as well as not allow any mental or physical lapses,” Patberg said.

The Eagles take the field once again on Nov. 1 at the WoodPEC against University Athletic Association conference rival Brandeis University (Mass.).