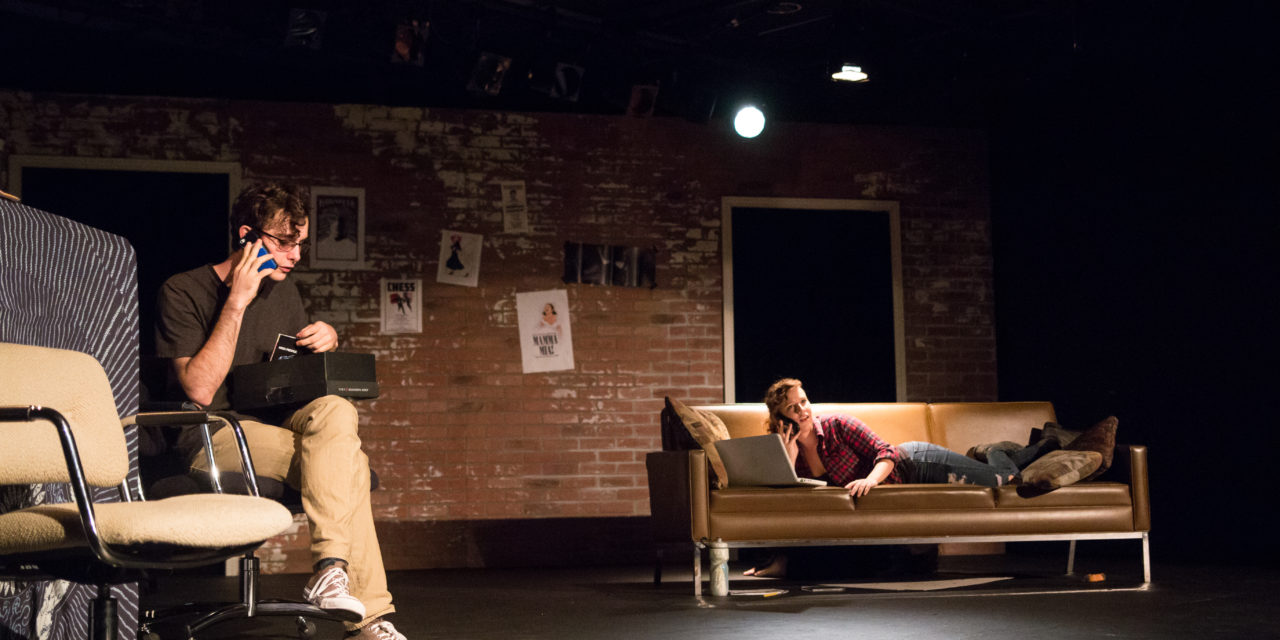 With four friends, one big idea, a piano and songs ranging from monkeys to playbills and half-naked people, [title of show] brings juvenile humor to set the scene of how a musical comes to be.

[Title of show], produced by Ad Hoc, Emory’s student-run musical theater group, runs Oct. 13 to 15 and 20 to 22 under the direction of College junior Max McCreary.

The musical’s concept does not require a large budget or jaw-dropping set; instead, it does fine with the Burlington Road Building’s shoebox-like space. Due to the tiny, minimalistic venue and miniscule cast, [title of show] is a smart, albeit safe, choice. Too often, theater troupes attempt to present large-scale productions without the set or budget to support them. The production is what one would expect when attending [title of show] — the audience laughed and left smiling, but this rendition had few moments of originality.

With a book by Hunter Bell and music and lyrics by Jeff Bowen, [title of show] follows two friends, Hunter (College senior Danielle Hopkins) and Jeff (College freshman Connor Cochran), who resolve to write an original musical and enter it in the New York Musical Theatre Festival. With the deadline only three weeks away and no inspiration for a plot, Jeff and Hunter call upon their friends Susan (College sophomore Hope Housman) and Heidi (College junior Lilah Bedrossian), and the four decide to write a musical about themselves writing a musical.

McCreary clearly made several well-thought-out decisions when selecting and casting this show. Hopkins crafts a traditionally male role into her own sarcastic, immature and pointed character. Phrases like “donating my sperm,” which were written for a male actor, do not seem out of place with her well-developed tomboyish personality. At times Cochran plays Jeff with a little more flamboyance in some scenes than in others; even so, he gives a coy and comical performance that compliments Hunter’s persona especially well, creating a dynamic duo onstage. At times it appears that Housman is fighting with songs outside of her vocal range, though this is ameliorated when she plays to the goofiness and exaggeration in the songs and the fact that the character is not much of a performer. With her exaggerated and hilarious facial expressions along with her strong voice, Bedrossian is one to watch.

The four-person ensemble has a genuine familial dynamic on stage, each actor supporting each other to bolster a wonderfully playful mood. While the actors are not the strongest singers or dancers, this is appropriate to their characters who are, as one song dubs, “Two Nobodies in New York.” However, each actor can be heard vividly, particularly during harmonies when blending is critical. In songs such as “Part Of It All,” “Die Vampire, Die!” and “September Song,” the stronger vocalists covered up the weaker ones, resulting in a painfully obvious clash of voices.

College sophomore Josh Oberlander’s set design is a simple unit set consisting of two walls with splattered Broadway posters, three doors for entrances and exits, a couch stage left and a piano and two chairs stage right. Center stage is a vehicle for song and dance and a common space that can represent unidentified locations such as in Jeff’s imagination or the dream sequence. The incongruous and anachronistic juxtaposition of musical posters (e.g., the poster of Smash from its 2013 season beside older shows like Chess) feels indecisive and incoherent. It would do well for this production to either update the references within the dialogue or define and commit to the time period in the set with specific details.

College junior Isaac Andrade’s simple choreography fit the show well; however, incorporating the scenery into the choreography would improved the show by differentiating the numbers that, as it is, are often indistinguishable.

Ad Hoc’s production of [title of show] is not a newfound version of the musical, but it is clean and casual. As the show’s four friends remind us of the trials and tribulations that go into creating a piece of art, it is equally as relevant to the team of students working behind this production. While lacking in some areas, this show’s cast and crew made it work, creating a delightful show for theater goers and rookies alike.