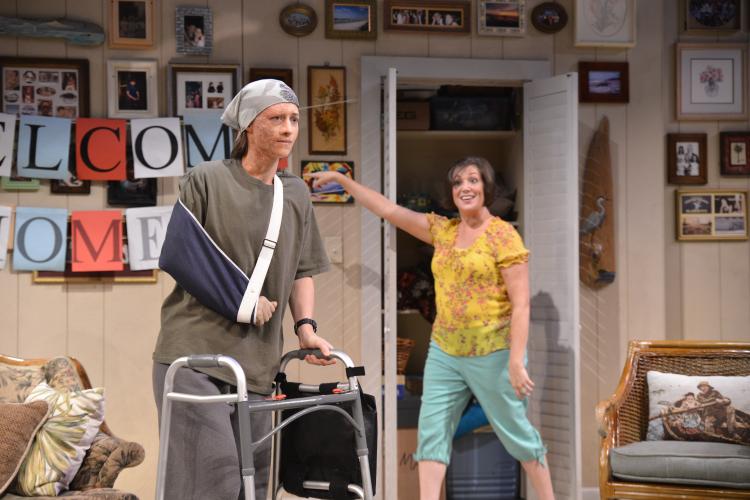 The word “war” speaks to a large-scale conflict in which battles are lost and won, and heroes either return or fall. With the all-too-relevant theme of disillusioned veterans returning to society after their service, playwright Lindsey Ferrentino interprets this mind-numbing issue in a grounded tale of a soldier’s life after the military.

Ugly Lies the Bone, which opened Off-Broadway at the Roundabout Theatre Company Fall 2015, has rapidly garnered praise nationwide and is showing at the Alliance Theatre’s Hertz Stage in Atlanta Sept. 16 to Oct. 9. Following the one-act show was a talk with Emory representatives regarding ex-soldiers’ mental suffering and new forms of technological treatment for it. Audience members also had the chance to try virtual reality treatment.

Battling the long-term effects of post-war trauma, Jess (Julie Jesneck) returns to her hometown Titusville, Fla., NASA’s space command during shuttle launches, to find that her world has changed. Jess enrolls in the modern-day practice of virtual reality healing, meant to overwhelm her pain and enable her movement, which is handicapped in real life. Through her time in therapy, she, her family and friends learn how to cope with the troubling psychological effects of war, such as post-traumatic stress disorder and a disconnect with normal society.

The shifting black box of the Hertz Stage adapts well for an intimate production such as this. The audience enters to bare, tiled floors and a simple modern square centerpiece on the ceiling of the room that serves as a reminder of the high-tech therapy institution where Jess is treated. What begins as a bare set quickly shifts into a lower-middle class home and a gas station counter. The set is what one would expect for the show and at times appears somewhat fake compared to the realistic storyline, but brilliant moments, such as the square ceiling lowering to act as a rooftop for Jess and her old love interest Stevie (Lee Osorio) to watch the space shuttle launch, allows the audience to cross easily between the imaginary worlds of Jess’ mind and the harsh realities of the everyday life.

While Ugly focuses on Jess’ chronic mental condition, it is difficult to disregard the fact that her appearance will never be the same as before the war. Due to being maimed on the battlefield, the right side of her face is torn up and drooping, making Jess a changed person inside and out. Makeup artist Jordan Venetis turns half of Jess’ face into rough terrain and sinking skin, serving as a constant reminder of the horror that Jess must have experienced.

Although the plot alternates between reality and the dreamworld brought about by Jess’ therapy, Ferrentino never loses the audience. Rather than jumping from point a to point b, Ferrentino drives the scenes without the final result in mind, instead creating a deeper scene that leaves viewers with a different perspective of the situation. In the scene where Jess’ mother (Megan McFarland) recognizes Jess after so many years, the moment is all the more impactful when you find yourself moved at the end, unsure of how you got there.

Beyond the sensational playwriting, the highly qualified Alliance cast delivers brilliant performances. Jesneck personalizes an unfathomable character, responsibly telling a sensitive story. Osorio perfectly displays the uncomfortable confrontation with an old friend who has drastically changed physically and emotionally. He also illuminates awkwardly attempting to relive the past, in this case pre-war Jess.

The voice of the virtual reality game is dictated by McFarland, possibly representing Jess’ yearning for familial support from her mother whom she thought had forgotten her. The virtual reality game is crucial to theme development: “To get rid of pain, we let go, and when we do that, we see the world not for what it was but for what it is,” the voice tells Jess. But it isn’t until Jess accepts her past, that she can begin finding joy and purpose in her life.

The balance of the traditional questions that are posed intimately throughout the play within the context of the technological treatment creates a fascinating dynamic of the technology unable to comprehend Jess’ emotions. The projections of snow-covered landscapes and burning fuel of rocket launches simulating the battlefield enable the audience to jump into the virtual reality alongside Jess. The experience becomes so vivid that one almost expects to feel freezing temperatures or searing heat.

With clarity and brutal honesty, Ugly Lies the Bone provides a brief glimpse into the mind of a troubled war veteran who yearns for the past but must keep moving forward. The Alliance Theatre goes beyond giving the show a platform and successfully educates the public through the arts and serious issues facing our communities today.