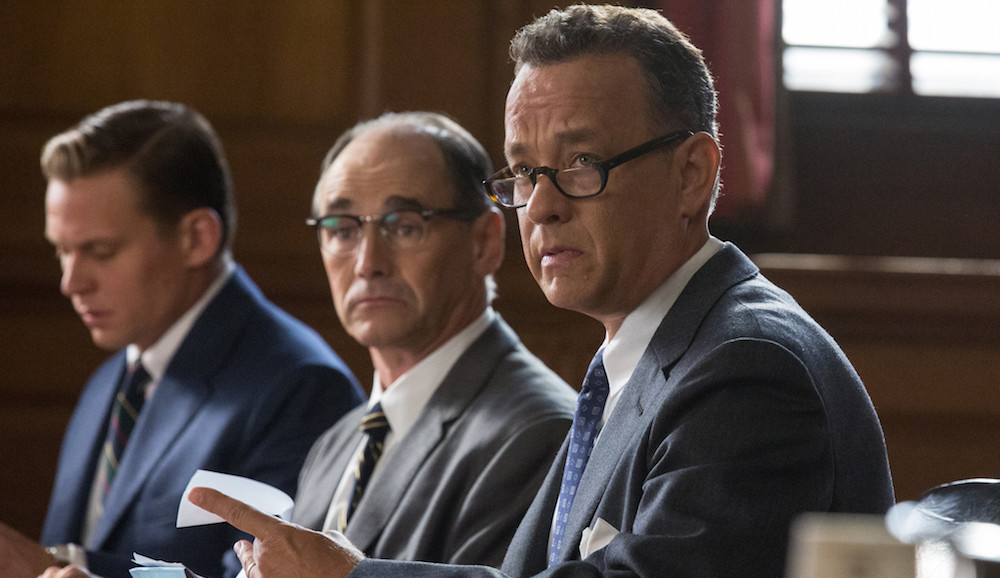 Let’s get one thing straight. No matter who your favorite director is, Steven Spielberg is probably better than they are.

In saying that, I don’t mean that he always makes better movies, although he has made more stone-cold blockbuster classics than any other director. I mean that no other director is as supremely confident and more in control of their camera and the story that they tell with it than Spielberg is. You may argue that he’s too sentimental, but you can never argue that that’s not the story that he wanted to tell with every inch of the film available.

Therefore it’s obvious that with Bridge of Spies, Spielberg’s supreme skill is on display in the best film he’s made in a decade (barring perhaps Lincoln).

The film follows the true story of James Donovan (Tom Hanks), an insurance lawyer charged with defending Russian spy Rudolf Abel (Mark Rylance), which escalates into negotiating a prisoner swap between the U.S. and USSR when American pilot Francis Gary Powers (Austin Stowell) goes down in a U-2 spy plane over Russia.

Like Lincoln, this is a film about principles being negotiated among the realities of governance. It’s about the virtues and victories of sticking to those principles at all costs. Whether or not you agree with that in principle, there’s something striking and poignant about that message.

The film seems directly aimed at the concept of mob justice, the idea that it’s good enough when we, with the goal of fighting our enemies, simply decide to throw out the rule of law, and that the enemy is not due or deserving of the freedoms we claim to uphold — a seemingly timeless message.

And that’s where Spielberg has always excelled. The messages that he gives through his stories never really feel dated and there’s always something we hook into. Yes, Spielberg is sentimental, but it’s because there’s something about sentimental film that’s universal —  it’s an experience that we can always relate to.

Now, this isn’t necessarily all thanks to Spielberg. The film was scripted by Joel and Ethan Coen, famed directors (Fargo, The Big Lebowski, No Country for Old Men) and less famed screenwriters-for-hire (Unbroken), and Matt Charman. More than a few of the laugh beats definitely feel like the Coens, but they subsume their style largely in favor of the quiet storytelling and more optimistic views of human nature common to a Spielberg film. Everything goes along with his vision.

That vision includes how relentlessly and insanely handsome this film is. Spielberg is not only an expert himself, but knows how to pick the best from Hollywood. Bridge of Spies is his fifteenth film with cinematographer Janusz Kaminski, and the two have become a locked-in pair. But it is his first film with production designer Adam Stockhausen, who won an Oscar for last year’s The Grand Budapest Hotel, an immaculately designed film.

And the expertise of these three men working together shows.

The film is full of lush, dark imagery. Swirling snows and inky, creeping shadows fill frames brimming with wonderful costuming and amazing period sets. Bridge of Spies is an absolutely wonderful film to look at, and made even better because every ounce of its wonderful design compliments the story.

Because so much of Bridge of Spies is composed of men speaking duplicitously, always trying to hide their true intentions, it’s up to the visuals and the design to articulate the states of our characters. As is Spielberg’s MO, every image effortlessly serves the purpose of his story. No camera move is unmotivated, no part of the frame does not serve his purpose.

And what is not articulated visually is articulated by some absolutely wonderful acting, with the work of two in particular deserving highlight.

The first is, of course, Hanks as Donovan. The role requires someone to be able to carry a certain moral authority, a skill that doesn’t tend to rest well with many modern stars — except for Hanks, who’s as close to a modern Jimmy Stewart as exists now. Hanks’ Donovan is a man of ruthless conviction, one who will stop at nothing to do what he believes is right by his client and his country. Hanks sells the absolute hell out of this and has a perfect warmth that suits the character of a man totally in his element as often as he is out of it.

The other is Rylance as Abel. A veteran stage actor, Rylance is tasked with humanizing someone who is being turned into an enemy. With that simple command, he runs away with it, turning in a wonderful and career defining performance. If Rylance isn’t in the discussion for Best Supporting Actor this year, then no one should be.

Bridge of Spies comes down to one simple fact: Spielberg is a masterclass filmmaker. One of the best. A lesser work from him is still a career best for anyone, and Bridge of Spies is not a lesser work. A well-acted, handsome look at what America should be and a great kick-off to the Oscar season.