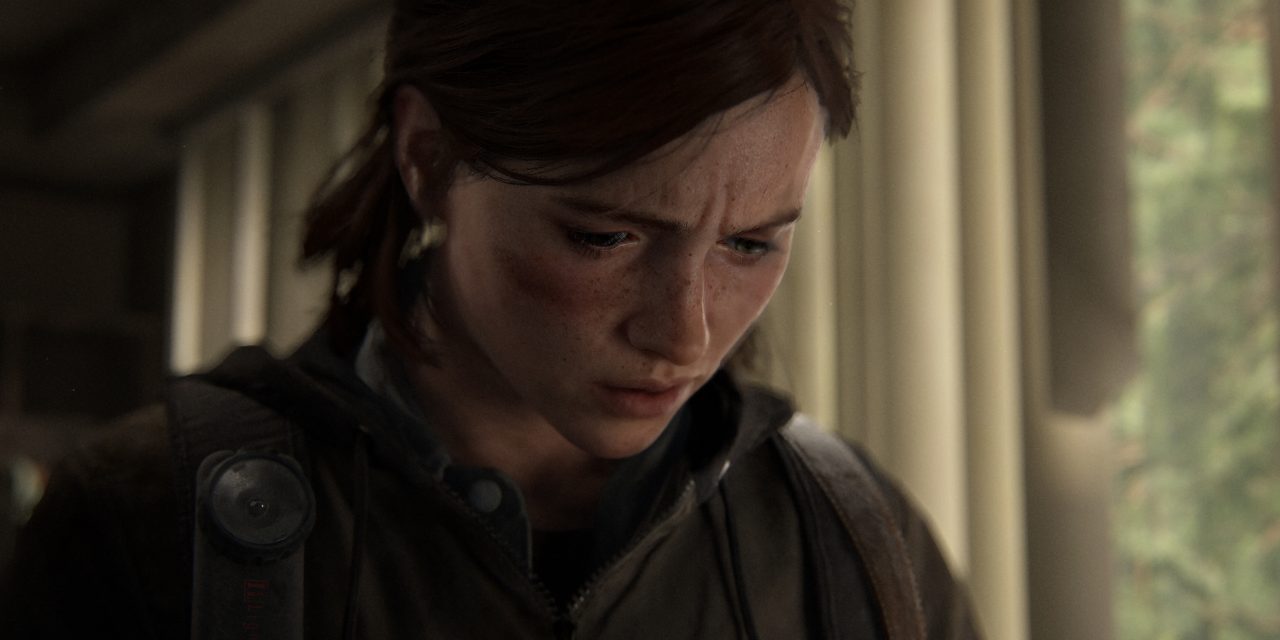 When I look out at the world, I see that it is ravaged by a pandemic, beset by tribalism and engrossed in violence and fear. You would think this sounds like our world, but it’s not — at least not in the same way. This is “The Last of Us,” a post-apocalyptic world brought on by a mutated strain of the Cordyceps fungus — one that has devastated humanity for nearly 30 years, creating terrifying monsters out of those infected.

In the first game, we were introduced to Joel Miller (Troy Baker), a hardened survivor with a shrewd and pessimistic attitude, who has done many questionable things in his struggle to survive after his daughter’s death. His story revolves around escorting Ellie (Ashley Johnson), a 14-year-old girl who’s immune to the virus, to a group of resistance fighters known as the Fireflies, a group eager to develop a vaccine. Joel and Ellie form a type of father-daughter relationship on their journey across the country, and when the time comes to save humanity or Ellie — as a vaccine would’ve killed her — Joel chooses a selfish and morally dubious path to save Ellie by any means necessary, even lying to shield her from the truth of his actions.

“The Last of Us Part II” inhabits a world filled with the consequences of Joel’s actions four years prior. It opens with a flashback to Joel discussing what happened with his younger brother, Tommy (Jeffrey Pierce), with both determined to keep the truth from Ellie. Joel wanted nothing more than to have a second chance at fatherhood in a community in Jackson, Wyoming. The story flashes forward to the present, with Joel and Tommy out on patrol when they come across a girl named Abby (Laura Bailey) and her group, who are out for revenge against Joel. Ellie stumbles upon the event and is all but helpless as she watches the man she regards as her father being killed before her eyes and screams for it to stop. The moment is brutal and emotional: it filled me with a mixture of rage, sadness and a desire for revenge — it had me screaming with Ellie, I loved Joel as a conflicted character and it was painful to watch. As a result, it makes her choice to pursue those who killed him to their base in Seattle feel just.

It’s worth mentioning that Seattle itself bears both the story of the outbreak and an ongoing war between the Seraphites, a group of fanatic, religious zealots, and the Washington Liberation Front who are locked in a tribalistic war over revenge killings mimicking the paradigm faced by the characters. 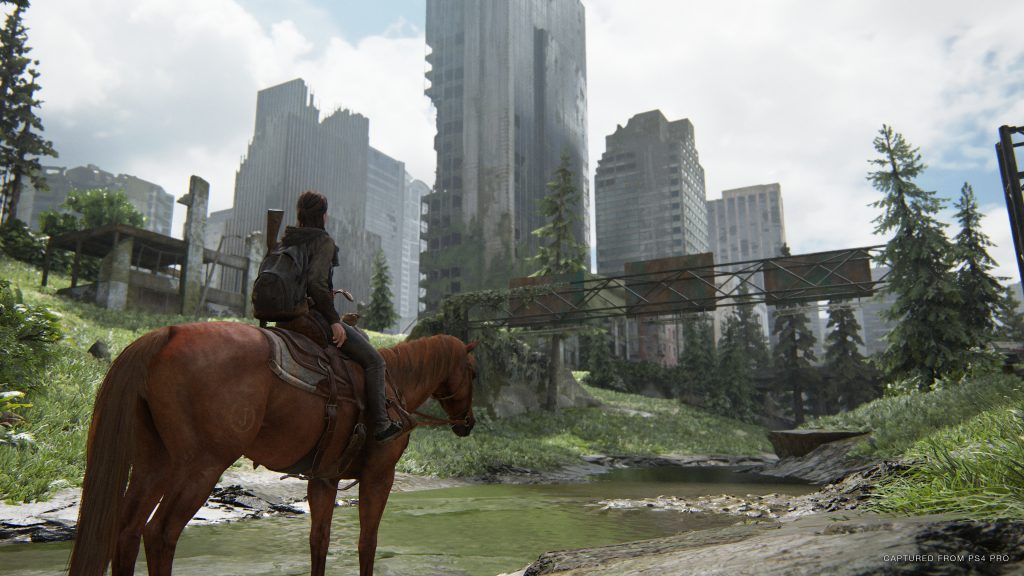 Ellie arrives in a post-apocalyptic Seattle that’s been reclaimed by nature./Courtesy of Sony Computer Entertainment America

In Ellie’s quest to achieve justice for Joel’s death, the player is thrown into an ever-darkening series of events which force you to fight and kill members of both factions, uninvolved in Joel’s murder. In Ellie’s eyes, they are simply in the way of her achieving justice. It makes you question Ellie’s level of violence as it continues to increase alongside her grief. All the while, she attempts to emulate Joel’s cruel survival tactics to solve her own problems — often to show how far she’s willing to go to seek vengeance.

While the revenge quest progresses, Ellie’s narrative beautifully intertwines flashbacks with Joel — tugging at your heartstrings as they show you how he tried to be a father again and, ultimately, how a dramatic confrontation caused a rift between the two — turning this from a story of revenge to one of regret and pain. As a whole, it felt like the innocent and jovial Ellie we remember from the first game has been hardened by this world, and I was unsettled and disturbed to watch her descent to a bloodthirsty killer. In the end, I wanted nothing more than to hear her crack a joke or show some semblance of her old lighthearted self, but instead, I found myself increasingly disillusioned and heartbroken by her actions that no longer felt like justice.

About midway through the story, you play into Abby’s side of events. You gradually realize how she is not a typical villain, but the product of circumstance and grief. It shows the hell Abby goes through over the same period Ellie arrives in Seattle to exact her revenge. Her experience ranges from nearly being hung, beaten to death and almost shot trying to save Lev (Ian Alexander), a young Seraphite condemned to death because he was transgender. Ultimately as a result of these events, you can grow to comprehend Abby’s character even if you are uncomfortable by the idea of her actions. I found myself caring about some of Abby’s group and Lev more than Abby because I felt bad for them being caught in the crossfire. Abby’s character is conflicted, to put it mildly. She struggles with her past and recent actions — it almost makes me feel genuine sympathy for someone who, 12 hours earlier, I was ready to condemn to death. Did her story alone make me like her as a character? No. There are multiple times in the course of the narrative that show that, even for the good she does, a part of you will never forgive her and I think that’s intentional. Simply put, it points out that you don’t have to like everyone in a story, but at least you can understand what drives their characters and makes them relevant.

By the end of the story, I felt empty, unsatisfied, angry and just plain sad at what had happened. I wanted nothing more than to hate this game. But as I thought more, it seems to be the game’s purpose. It wasn’t designed to satisfy the way a “normal” story would at the end. The game’s ending reveals the story’s center isn’t about revenge, it’s about peace of mind.

If anything, that realization alone made me feel disheartened for both characters: what they had both lost and become along the way on their path for revenge. I felt remarkable cycles of anger and frustration, punctuated by moments of happiness, only to then feel distraught moments later. There are moments you’ll wish the story would just stop because you want both of their suffering and pain to end — but it doesn’t. It drags you through the gutter until the end.

The character development and ebb and flow of the plot made me stick around. I deeply cared for characters and my heart raced throughout game play. I felt like a survivor of the apocalypse: always thinking there was an infected or guard out of sight, thinking something bad would rip a character away or wondering whether I had to be prepared for the appalling acts of one of my “heroes.” In short, what the game left me with was a haunting story that I still haven’t quite gotten out of my head. To say I had fun wouldn’t be the right word choice. It isn’t fun. It’s an experience that will rattle you and leave you hollowed emotionally, in a way most games do not.

In regard to the actual gameplay, sound design, graphics, acting and music — they make the game shine as a masterpiece. It all felt as if I was immersed in this world every time I found a survivor’s note or gawked at the overgrown look of Seattle or heard the sound of the infected coming or when I was forced to fight. I felt horrible and disgusted because of the violent acts I committed. Initially, I didn’t question the violence. It’s the apocalypse — people kill each other regularly. However, there are subtle reminders of humanity — the enemies humanize themselves through dialogue and show terror at finding a fallen friend. All these elements together create a truly immersive environment that strikes awe in the beauty of the world, disgust in the violence and pain in the sheer ugliness of humanity.

As much praise as I’ve directed toward the game, it’s worth mentioning that it isn’t without its faults. I do believe the overall narrative would have benefited from being condensed in sections that feel endless, which tired me out by the end. Some changes in the presentation of the narrative could’ve served to show Joel’s change from a hawkish survivor to a softer individual. A mid-game shift from Ellie to Abby causes a loss of momentum, as the story abruptly shifts to Abby’s perspective away from the climax of Ellie’s narrative. That choice left me feeling perturbed and disgruntled, and I think it could’ve been made smoother. The one change I believe would be integral is giving players a sense of who Abby pre-Joel’s murder by making the introduction longer — building to that moment rather than dumping that development in the middle. Nevertheless, the choices in the game’s presentation feel intentional and well-thought-out by its creators. Nothing feels like a disservice to the characters or the narrative. The creators delivered a story devoid of the typical fan service seen in sequels. As a result, the game forces viewers to question their love for these characters and probes relevant moral quandaries, which creates an amazing storyline in the process — even if I don’t agree with all the choices.

In the end, developer Naughty Dog’s “The Last of Us Part II” is an ambitious tale, portraying a poignant and often brutally depressing story of the cycle of revenge, the pain of loss and the dangers of tribalism that plague our own world. However, in its finest moments, the game offers hope for redemption, helping us ponder the small things taken for granted and pushing us to walk a mile in someone else’s shoes. At the very least, “The Last of Us Part II” helps us accept loss and see the light in the dark — even for those possibly too far gone.