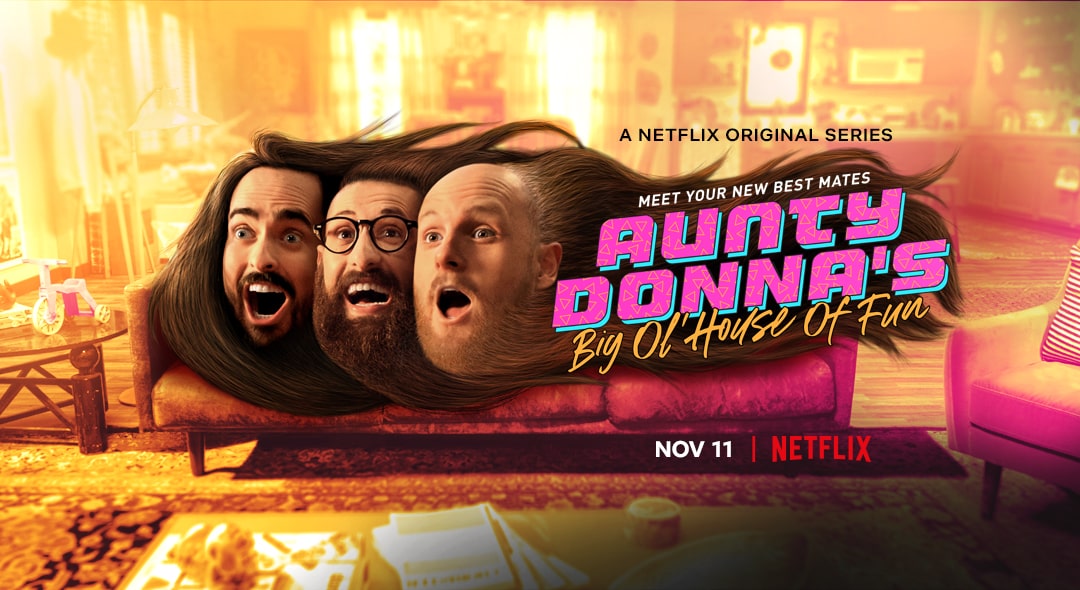 If you’re someone with a hankering for absurdist humor, be careful not to overdose on Netflix’s latest sketch comedy series, “Aunty Donna’s Big Ol’ House of Fun.” While the premise is ordinary — three likable friends live together under one roof — the show itself is anything but. The first wacky segment of the series involves the trio banging on anything and everything around their house while repeating, “Everything’s a drum!” establishing that viewers are in for something as entertaining as it is ridiculous. Over the course of six episodes, the show delivers hysterical musical numbers, zany plotlines, a talking dishwasher and much, much more.

The series features Mark Bonanno, Broden Kelly and Zachary Ruane as themselves, the three members of Aunty Donna, a comedy troupe out of Melbourne, Australia. While “House of Fun” was my first introduction to Aunty Donna, the trio has a huge following in their native Australia and online. They have been making videos with director Max Miller on YouTube since 2012, performed at comedy festivals around Australia and even released an album of satirical songs in 2018. Aiding in their antics are various guest stars including Ed Helms from “The Office,” Karan Soni from “Deadpool,” female wrestler Kia Stevens, Antony Star from “The Boys” and the one-and-only Weird Al Yankovic.

Each episode begins with the “word of the day,” a theme or idea that grounds the otherwise chaotic plot; for example, an episode that begins with the word “housemates” centers around the trio trying to find a new tenant after they give their old one the boot. It is a surprisingly original way to bring a plethora of oddball characters into the mix. When the word of the day is “treasure,” Kelly and Ruane appear as Sam and Sam, two South African “booty hunters” with horrendous yet priceless Afrikaans accents. As someone who grew up in South Africa, the skit left me in stitches.

“House of Fun” doesn’t try too hard to be “woke” or political, making sketch shows like “Saturday Night Live” feel like a stale relic of the past. It was refreshing to see a sketch comedy show that knows what it wants to be, pushes boundaries and revels in all its eccentricities. Our generation certainly deserves a slight break from reality or something so fun and mindless while we’re stuck indoors.

Additionally, the show strikes the perfect balance between high-concept skits, musical gags and all-out, sidesplitting insanity. You never know what’s coming next, and when the joke does arrive, it’s never what you expect. The trio’s style of comedy can be best described as a cross between “Monty Python’s Flying Circus” and “The Eric Andre Show.” Some of the best sketches include a game show where the host pauses at the most inopportune times, a raid where the SWAT team breaks out into song and dance, and an ongoing bit where a desktop computer starts flying around the living room.

The series never slumps to the point of feeling completely tiresome, but there are a few segments that don’t shine as bright as the rest. Thankfully, when the humor feels low-bar or obnoxiously nonsensical, it’s carried out in a self-aware way, which dials up the joke’s silliness factor. Due to the fast pace of the comedy, the weaker sketches usually don’t overstay their welcome.

There’s not a dull moment to be found in “House of Fun” and the six episodes fly by. Even though it goes by quickly, the series is chockablock with meme-worthy content and unforgettable moments. If you watch the show with friends, you’re bound to have a new reservoir of inside jokes by the end. It goes without saying that once you’ve experienced Aunty Donna’s outrageous style of comedy, you’ll never be the same.

Correction (12/2/2020 at 10:18 a.m.): A previous version of this article stated that the show featured a talking washing machine. In fact, it was a talking dishwasher.