Emory hosted 13 speakers who discussed a variety of topics related to the sciences, humanities and arts at TEDxEmory’s Saturday event in the Woodruff Health Sciences Center Auditorium.

The event, which was founded and began in 2010, is one of the largest of its kind in North America. This year it drew around 600 spectators.

This year’s conference invited a number of professionals from multiple disciplines including David Wolpe, named Newsweek‘s most influential rabbi in the nation in 2012, Associate Justice of the California Supreme Court Carlos Moreno and Center for Robotics and Intelligent Machines Director Henrik Christensen.

TED is a non-profit organization that fuses components from technology, entertainment and design at conferences around the world to foster innovation and dialogue.

TEDx events are independently organized, and their objective is to simulate a TED conference experience. While they must follow the rules and regulations of TED, they are self-organized.

College freshman and TEDxEmory Online Media & Marketing Team member Chandler Wald said TEDxEmory thought of around 55 individuals they were inspired by or people they knew.

The list of speakers was then narrowed down based on who TEDxEmory members were most interested to hear and who was available, according to Wald.

This year, TEDxEmory partnered with the Emory Alumni Association to bring in speakers, according to College senior and TEDxEmory Director of Operations Jonathan Katzner.

The event started off with Dr. Larry Young, the Chief of the Division of Behavioral Neuroscience and Psychiatric Disorders at the Yerkes National Primate Research Center.

Young’s research tests the effects of oxytocin and vasopressin, two hormones that are released in the brain, on monogamous relationships and love.

Every year, Emory hosts a student speaker competition. This year’s winner, College senior and first-year student at the Rollins School of Public Health Hugh Green, introduced the audience to smart cities, which have sustainable economic development. He cited Masdar in the United Arab Emirates as an example, which is a zero-carbon, zero-waste city.

As TED’s objective is to spread ideas that relate to modern society, two of the speakers discussed what they referred to as a disease of civilization: clinical depression.

Lynn Garson (’81L) explained her 30-year battle with depression and other mental disorders and encouraged the audience to be more conscious of mental illness, especially to suppress the negative stigma around it by eliminating phrases like “that’s crazy” from their vernacular.

Many of the audience members were familiar with TEDtalks.

“I watch a lot of TED videos all the time, but this is my first event,” College senior Kristen Tassini said.

The audience consisted of Emory students, faculty, members of the Atlanta community and people from surrounding areas.

E.P. Stallworth, a junior at Birmingham-Southern College (Ala.), is a long-time TED fan and drove two and a half hours to Emory because it was the closest TEDx event to her.

“I have loved TED forever,” Stallworth said. “The inner nerd inside of me is jumping up and down.”

Some of the speakers delivered speeches that encouraged people to take action.

Jamie Grant, a magician who is featured in “Ripley’s Believe It Or Not” for putting a sealed deck of cards into a glass bottle, leaves these bottles with inspirational messages at random locations for people to find and keep.

Grant emphasized the importance of going out of your way to do kind acts for other people.

“Random acts of kindness are a complete waste of time,” Grant said, explaining that kindness should be specific and have focus.

Film director and photographer Harun MehmedinoviÄ‡ spoke about his experience growing up in wartime Bosnia. He explained that he felt like he was living more in the moment when his life was in danger than when he moved to the United States. MehmedinoviÄ‡ encouraged the audience to live in the moment.

“Any time you look at the watch you’re not living in the present,” he said.

Along with live speakers, videos from TED conferences were shown, including Neil Harbisson, a colorblind man who uses a device that is connected to his brain which translates color into sound frequencies to understand the world around him.

The program was hosted by Josh Levs, a former CNN broadcast journalist and a previous TEDxEmory speaker.

“We were fortunate to have a lot of great speakers,” Katzner said. 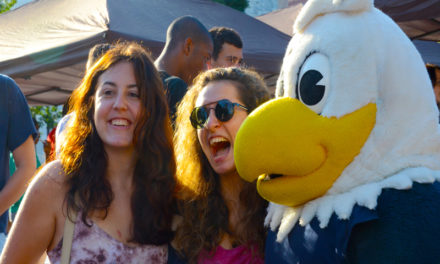