Symposium: Coming Together for the Arts 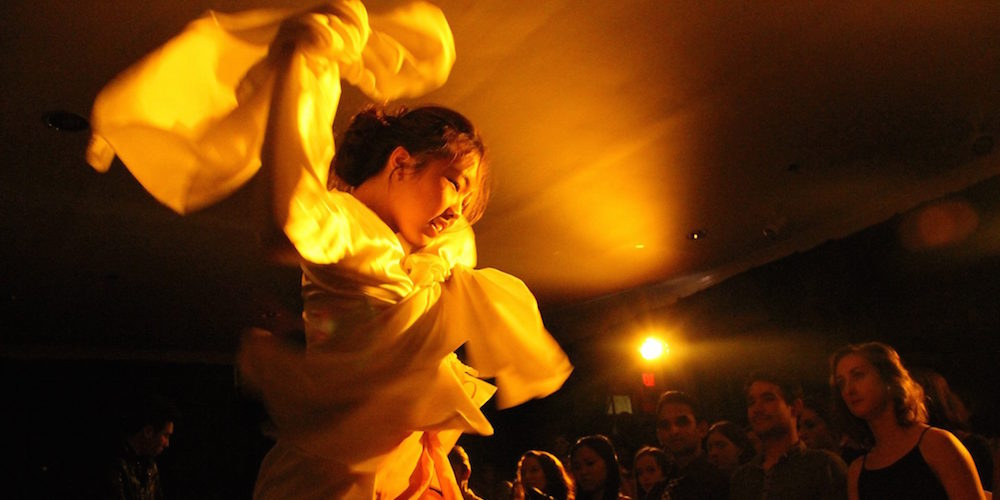 Last Thursday at around 9 p.m., an L-shaped line of students in party-esque clothes formed outside 12 Eagle Row. On the other side of the heavily-manned ticket table guarding the entry, the crowd of those who’d scored tickets packed into the basement of the Alpha Tau Omega (ATO) fraternity house. Everyone seemed to buzz against a backdrop of live music and student artwork.

Co-hosted by ATO and The Pulse, Symposium aimed to bring together Greek life and the arts at Emory. With a full night of 18 student performances from a wide variety of artistic genres, the event built a bridge between two campus scenes that often feel separate.

“Reaching out to different cultural and arts groups is something that’s really important to us [at ATO],” ATO Event Coordinator and College sophomore Matt Shehata said. “I think, for people who aren’t involved in Greek life, all frats seem mostly the same, so I’m glad that people get to see this side of ATO.”

About 15 minutes into the event, the current of the crowd drew everyone to the corner of the basement and up a cramped staircase, pitch black except for rectangles of white light from phone screens. Attendees funneled immediately into a broad room, lined with sheer black floor-to-ceiling drapes that turned the ATO living room into a concert venue.

White folding chairs were set up in theater rows, jam-packed onto every inch of floorspace the room had to offer. At the front of the room, there was a tiny performance area and a DJ station that blasted chill and (for the most part) unintelligible beats, including “Cream Soda” by Ryan Hemsworth featuring Tomggg, with the bass boosted significantly, pulsating throughout the dark room. Seats went fast, and, as the rows filled up, conversations about whose friends were performing flew back and forth across the chatter.

From behind two French doors with parted drapes, performers paused to peek out at their audience. Busy ATO brothers buzzed around, checking on performers, seats, lights and guests to ensure everything was in order for the 9:45 p.m. showtime.

For those who attended Symposium last year, the environment of this year’s event was a stark contrast.

“We tried to upgrade everything,” Shehata said. “We had lighting, stage management and a dress rehearsal. Personally, I just wanted to put on a great show.”

A few minutes after the scheduled start time of 9 p.m., the spotlights that illuminated the stage slowly flashed off and on and then off again. A round of audience “shhhhhh”–ing rang through the room. An iPhone started to ring. Somebody shouted “Fuck you!” at the iPhone and its owner.

In the dark, the DJ pressed play on a track with bass-heavy beats. The audience was silent in anticipation. After a few seconds of music, people began to realize that the darkness was by mistake and several voices yelled, “Lights!” The hulking spotlights flashed on, casting a red glow over the room and revealing the opening act, Persuasion. The dancers decided that the routine should restart from the top, and when the lights went dark again, groans and laughter erupted from the audience. Unlike the rocky first attempt, however, the red glow came on like clockwork with the beginning of the music, creating the perfect ambiance for a spicy hip-hop routine.

After the performance, the room went black again, signaling the transition to the next act.

A warm, yellow light fell on the four-piece band, The Family Jam, which featured a banjo, a guitar solo that made the crowd go wild and a relaxed, folksy sound somewhere between Palace and Fleetwood Mac.

The event also featured stand-up comedy by College senior Rebecca Olderman, who roasted several Emory-related topics including RiceMac, a cappella, road head and last but not least, the B-School. Simply reading the topic title elicited a roar of laughter from the audience.

As the night flew by, Symposium’s performers dazzled their peers with slam poetry readings, bands and solo singers, modern routines, improvised Chinese dance, MADE a cappella quartet, Emory’s improvisational comedy troupe, Rathskellar and almost everything in between.

“[Symposium] was a great experience – just being at the show – regardless of planning it,” Shehata said, “If I could’ve done something differently, I would’ve tried to have made the whole thing run smoother, but it obviously wasn’t a professional show.”

Over the course of its late, rough start and attempts at stage management, it became clear exactly what kind of event Symposium is; for those who are looking for perfectly executed shows, like Music Midtown or concerts at the Tabernacle, this is not the event for you. Symposium is where performers break the fourth wall, comfortably make I-just-messed-up-the-lyric facial expressions and involve the audience as integral parts of their acts.

Even more than an event or show, Symposium acts as a dialogue. This is something that more formal performances can’t offer because they exist simply to entertain and amaze; instead, Symposium exists to bring Emory students and Emory communities together. It reminds us of the too-often forgotten fact that, despite our different campus groups and scenes, we are all part of the same University community, in which our peers possess an incredibly rich and wide range of talents.