From Icons To Experience: Tibetan Iconography Beckons The Viewer Into An Enlightened World 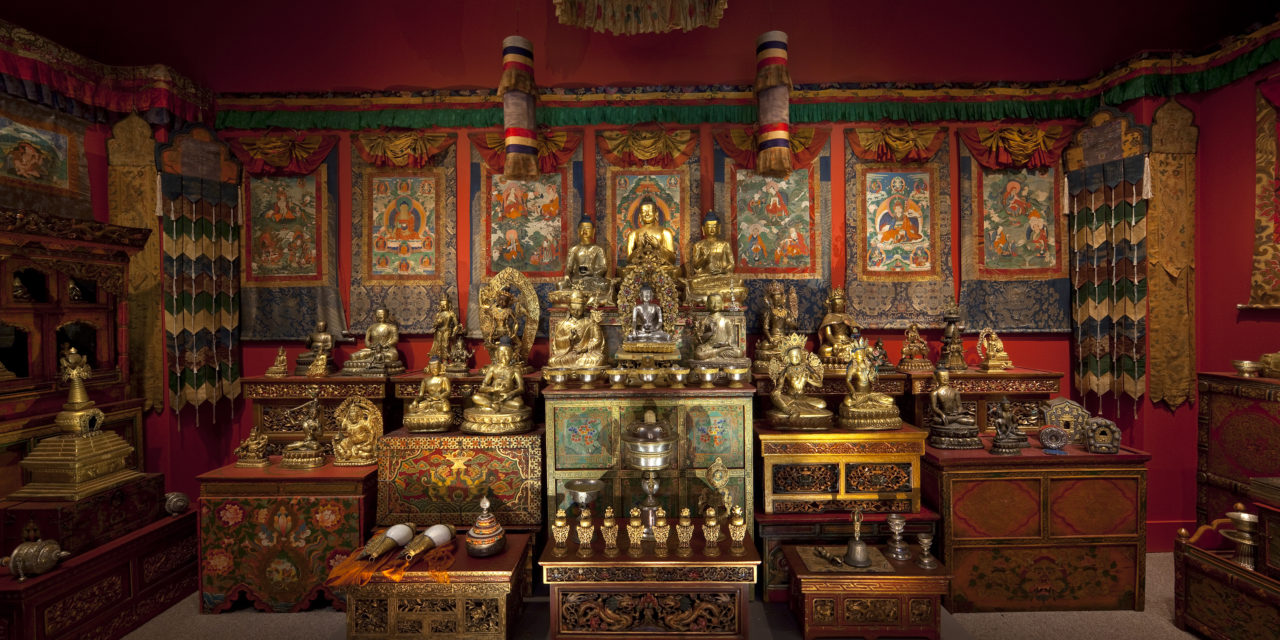 The viewing experience in an art museum is somewhat predictable: a work of art is centered on a blank wall, perfectly leveled, illuminated and punctuated by a block of text enumerating its name, artist, medium, date, significance and so on. Move down the wall, and there’s another piece. Perhaps a sculpture is seated on a smooth stand. This is something we’ve come to expect; however, Doorway to an Enlightened World: The Tibetan Shrine from the Alice S. Kandell Collection offers an entirely different experience.

On display at Emory’s Michael C. Carlos Museum until Nov. 27, 2016, the pieces in Kandell’s collection of Tibetan Buddhist iconography have not been separated out and labeled as one might expect, but rather integrated into one cohesive, stunningly experiential display.

“One of the critical things to understand is that the reason for displaying a shrine like this is that it helps us to understand not only the icons themselves, but the practices that would be undertaken in the presence of such a shrine,” Sara McClintock, associate professor of religion, said. “We’ve designed [this exhibit] so that there’s a sense of entering a sacred space.”

The shrine, located on the Carlos Museum’s third floor gallery, is hidden from view at first, but upon rounding a corner, the viewer is met with an astounding richness of color, sounds, iconography and a spiritual presence. Featuring many objects, including gilt statues, offering bowls, musical instruments, hanging iconography and intricately painted and carved furniture, the exhibit is meant to evoke a personal shrine that might be found inside a Tibetan Buddhist home.

Because the display of Kandell’s collection is so experiential — even allowing the viewer to enter — it likens the viewer’s experience to the perspective of a Buddhist practitioner entering for spiritual purposes.

“When someone comes into the presence of a shrine, the very next question is what should that person do?” McClintock said, “One [practice] is to make offerings of rice, water, flowers, incense, sounds in the form of bells ringing and so on. There would also be prostrations and verses of praise, and a very popular practice is confession of one’s faults. At the end of each practice, one dedicates the merit that he or she has generated [during the practice] to all sentient beings and one’s own future awakening.”

Personal transformation is a theme that is deeply embedded in this shrine for practitioners, viewers and collector Alice S. Kandell herself, whose connection with Tibetan iconography began in her college days. In an almost mythic twist of fate, Kandell’s friend, Hope Cooke, met the Crown Prince of Sikkim, an almost entirely Buddhist state in Northwest India, after her freshman year of college in 1959 and married him in 1963. When the King of Sikkim passed, Kandell was invited to her friend’s coronation, who subsequently became the Queen of Sikkim.

Kandell returned multiple times, capturing thousands of photos of life in Sikkim, before the state was annexed into India in 1975 and Cooke separated from her husband, moving back to the United States. The experience left its mark on Kandell, who fell in love with Tibetan iconography and began to collect it. Later, she merged her collection with that of Phillip Rudko, a deacon in the Russian Orthodox Church and close friend. While she maintained the collection in her home, Kandell and Rudko ultimately decided to donate it.

“I really felt that [the collection] should be shared, so we went to the Dalai Lama and asked him what he thought about it,” Kandell said, “He said that the events of the past 50 years had been disastrous for Tibet and that we need something to show people what Tibet was. He was very happy.”

Donated to the Smithsonian Institution’s Arthur M. Sackler Gallery in 2011, the collection will ultimately return there in 2017. For now, the shrine remains on display at the Carlos Museum, with its public opening kicking off Emory’s Tibet Week (March 21 to 25, 2016) and its presence further enriching the Emory-Tibet Partnership. This Doorway into an Enlightened World is not only a breathtaking display of Tibetan iconography, but a gateway to learning about and beginning to grasp the depth of Tibetan Buddhism.

“The shrine room gives you a sense of spirituality, even if you’re not a Buddhist,” Kandell said of her collection, “Each piece is beautiful, but no matter how beautiful they are, together [they form] a whole spiritual experience.”