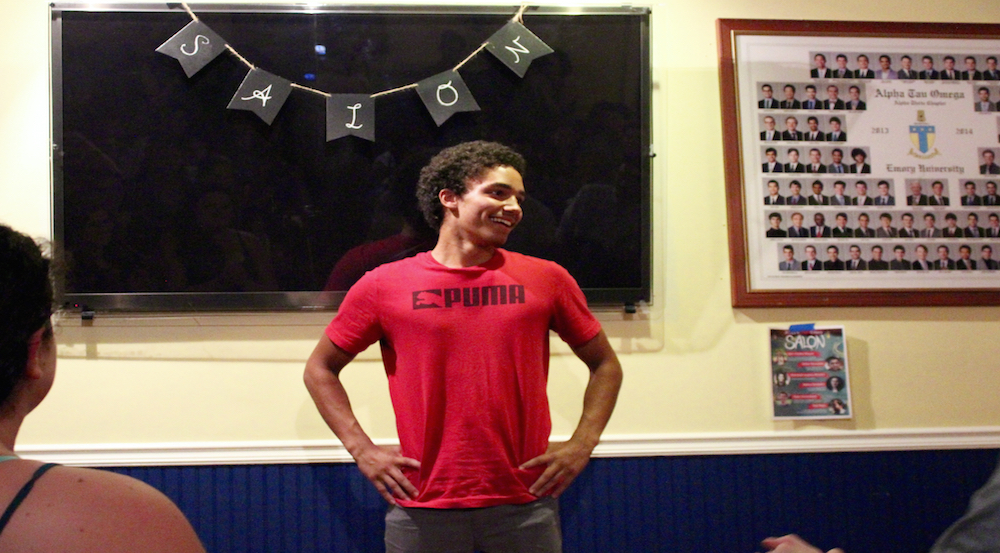 Approximately 200 students took time this past Friday to attend the ATO and TEDxEmory Salon, an intimate event that focused on sharing students’ ideas.

“We recognize the fraternity spaces are not always the most open and can be sort of for only one subset of the Emory community,” College junior and President of ATO Hugh McGlade said. “And we hope to open these doors and this space that we are so privileged to have, to different kinds of people and different ideas and to foster a kind of dialogue.”

The event, which was sold out in less than 15 minutes, hosted six student speakers who addressed a variety of topics.

“It was intimidating at first — the idea of doing this in a frat house — because sexual assault is a very real issue on college campuses in general and particularly in regards to Greek Life,” Redden said. “And so it felt like a group of people who: A, use this language a lot and B, are in a time of their lives where it’s especially important to be thinking about these things.”

College senior and ATO member Ami Fields-Meyer used his speech to address the way we speak about race in the United States. He says that there is a need for a forum through which intellectual communication can take place.

“At Emory, the issues all exist, and I don’t think we always talk about them openly,” Fields-Meyer said. “However, I also think that college students in particular who are in our classes and are talking about these issues should have a framework to talk about some of these things outside of the classroom.”

If that’s the case, then there is not only a need, but a desire for this type of event.

“Emory is full of smart, fascinating people, and it’s about finding ways to get those people together. And space is really crucial to that,” McGlade said. “Fraternities are incredibly privileged to have a lot of space and a lot of smart people, and I hope it’s just a great way to mix the space and the ideas.”

ATO first hosted the event last year with the fraternity’s vice president at the time, Oliver Paprin (‘14), at the helm.

“ATO prides itself on being very involved in the Emory community in general and not just in the Greek community. And actually one of my missions as president is to make sure that we are as open, as accessible and as safe as we possibly can be,” McGlade said. “An event like this falls right into line with that sort of hope.”

The TEDxEmory team worked to find, select and vet speakers who shared their desire to spread their thoughts and create this open atmosphere through a fraternity event.

College sophomore Marshall Kupka-Moore talked about the value of impatience and the importance of having impatience until one finds what is worth being patient for.

“I feel that impatience is … quite a positive character trait. That’s because I feel that we have to broaden our horizons and we have to deepen our pool of experiences before we are prepared to be patient,” Kupka-Moore said. “These character flaws that we inherently have are the way we figure ourselves out so that we will be able to one day find our passions — so that we will develop the proper self-awareness to find our passion.”

College senior Rifat Mursalin chose the topic of speaking to strangers after spending 3 months deliberately going out onto the streets and talking to random people.

College senior Sid Raju spoke about what physics can reveal about fate and determinism.

“I think it’s important to understand fields outside of your own,” Raju said. “It’s important to see why something that you’re not studying is still important or why people who study some subjects choose to study them.”

Working with the TEDxEmory team allowed the students’ speeches to develop. College sophomore Nate Silverblatt talked about how communities can benefit from spreading kindness and showing more appreciation for one another.

“Originally my talk was more geared towards how kindness can change the world, but working with the TEDx team, who was very personal and really easy to work with, they wanted to make it more specific to Emory,” Silverblatt said. “Focusing on Emory really enhanced my speech and my point altogether.”

The setting of a fraternity house for a salon, combined with the focus on Emory itself, brought a new ambiance to the event.

“Every speaker is an Emory College student. The whole idea of TED is that everyone has an idea worth spreading,” College junior and Director of Special Programs for TEDxEmory Izzy Kornman said. “Everyone in the audience is also like, ‘Oh, they’re an Emory student, I could do this,’ or, ‘I love their idea. I can talk to them because they’re just a student.’ ”

“I was a little unsure about it [being on the Row] at first,” College freshman Alex Nazzari said. “It was as interesting experience that it was there because that’s not what I would associate a frat house with, but I thought it was even more powerful that you got a community of people there that were really interested in talking about these topics and I don’t think the location really impacted the conversations that we had.”

The success of this event lends itself to what some predict to be a promising future for intellectual events on Eagle Row.

“It’s definitely leading the way, and having the event be successful, having it be sold out in [less than 15] minutes, and knowing there’s that interest out there could definitely inspire other fraternities,” Kornman said.

Correction (9/13 at 11:20 p.m.): in paragraph 10, Oliver Paprin was said to be the fraternity’s president, when he was the vice president. It has since been updated to reflect the accurate title.