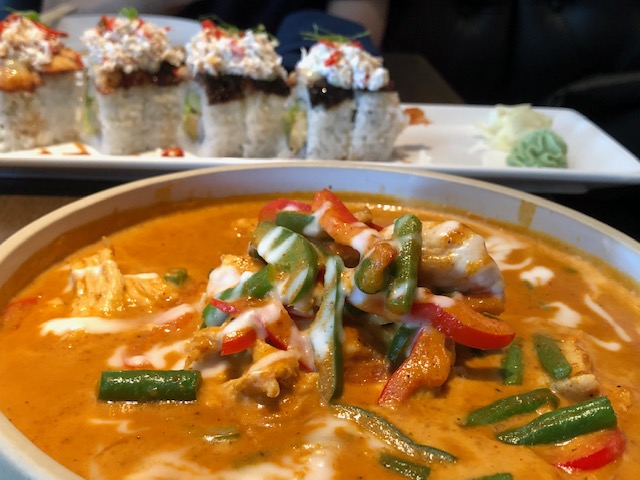 While some food connoisseurs would never fathom eating pad thai and sushi together, Chef Nithidol “Terry” Nithithanawut did not think twice about the pairing when opening Silom Thai and Sushi bar in Nov. 11, 2019 in Buckhead.

Across from JW Marriott Atlanta Buckhead and near Lenox Square mall, Silom is Chef Terry’s second restaurant following his 2015 opening of  Bangkok Station in Buckhead. The fusion eatery’s tasteful interior matches the theme of Thailand’s Silom district, which is renowned for its nightlife. The restaurant takes pride in its artistic atmosphere, authentic street Thai and sushi cuisine, and mastery of signature cocktails.

Upon first walking into the restaurant, I was impressed by the aesthetics of the interior design — the walls were lined with classy wood paneling interspersed with Thai and Japanese artwork of traditional cultural symbols. Our waitress guided my friend and me to a table in the smaller dining area beneath an ornate and multi-colored tile mosaic of a Japanese samurai in the midst of drawing her sword. The mosaic provided enthralling and beautiful ambience as we began rummaging the menu.

The menu featured about 10 Thai dishes to go with a dozen appetizers including mussels and edamame. Also, the menu boasted a wide sushi selection, featuring over 30 sushi rolls from traditional California rolls to signature fusion rolls. I was delightfully surprised by the diverse array of craft cocktails included in the alcohol menu, which offered both classic drinks and Thai-inspired creations. Although I was tempted to order the Silom Mule with homemade jasmine syrup, I decided against day drinking on an empty stomach, so I instead opted for the starters section to quell my hunger pangs.

My friends and I began lunch with chicken satay skewers, and our food arrived promptly within 10 minutes. The five skewers were served atop a bed of crispy rice noodles, along with a traditional satay peanut sauce and a sweet and sour sauce containing diced vegetables. The chicken was tender and succulent, and the saltiness of the seasoning added a savory flavor. The satay peanut sauce was a perfect harmony of creamy, sweet and salty, while the sweet and sour sauce offered a fresh alternative with its vegetable blend of onions and cucumbers.

Following another brief 15-minute wait, the Panang curry with chicken was served in a wide, flat bowl with a deceptively large portion of curry, chicken and grilled vegetables. The plating was visually appealing, with a drizzle of white creamy sauce atop the generous pile of meat and vegetables.

As someone who frequents Thai restaurants and Emory’s Thai Student Association food events, I can safely say that this curry was one of the best I have tasted, if not the best. The curry was remarkably decadent and rich with creamy coconut milk. The spices gave the curry an orange tint and added a noticeable, yet bearable spiciness. For $14.95, it was well worth it and could comfortably feed two people along with a starter. Considering quality and price, it was the best dish of the afternoon.

While we enjoyed curry, the Night in Bangkok sushi roll, which the menu listed as one of Silom’s most popular dishes, arrived at our table. The presentation was aesthetically pleasing and impressively colorful, like a cake so well-designed that eating it feels shameful.

The eight large pieces were topped with grilled eel, crab salad and Thai chilies, and filled with shrimp tempura, avocado and cucumber. The crispy fried shrimp was complemented by the fresh avocado and cucumber. The chilies were a nice touch, adding a moderate spice level to the sushi beyond wasabi. Like many specialty rolls, the pieces were quite bulky, which made it difficult to eat in one bite. The topping fell onto my plate after a single bite, yet, I was content to eat the topping separately from the sushi. The combination of the sweetness from the crab salad, the spiciness of the chilies and the freshness of the vegetables gave the roll a unique flavor.

A 20-minute drive from campus, Silom offers shoppers a great option to grab a meal. The service was prompt, friendly and warm. The lighting provides a classy dimmed effect that still affords enough light to see your meal, and the instrumental pop music softly plays relaxing music over the audio system to match the tranquil interior.

The restaurant has two dining areas, a smaller area enclosed by the bar and sushi bar, and a larger area behind the bar. The sushi bar is adorned with a statue of Buddha, a decorative Japanese banner and some pottery. The large bar features a massive glass display case with a variety of liquor, wine and beer. Beyond the bar, the restaurant opens up with a larger dining area including about 20 tables for larger groups and features more eye-catching artworks of Thai elephants and Buddhist religious symbols.

Claiming to serve over 80 of the most authentic Thai street food and sushi dishes in a single menu, Silom offered quality, a wide range of food options and incredible ambiance. Overall, Silom is a valuable addition to the Buckhead neighborhood and plates flavorsome dishes at a respectable price given the classy interior. Silom provides a great venue for special occasions, dates, an outing with friends or a much-needed study break. 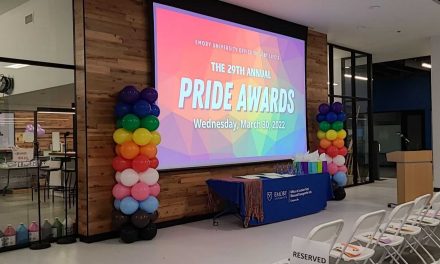