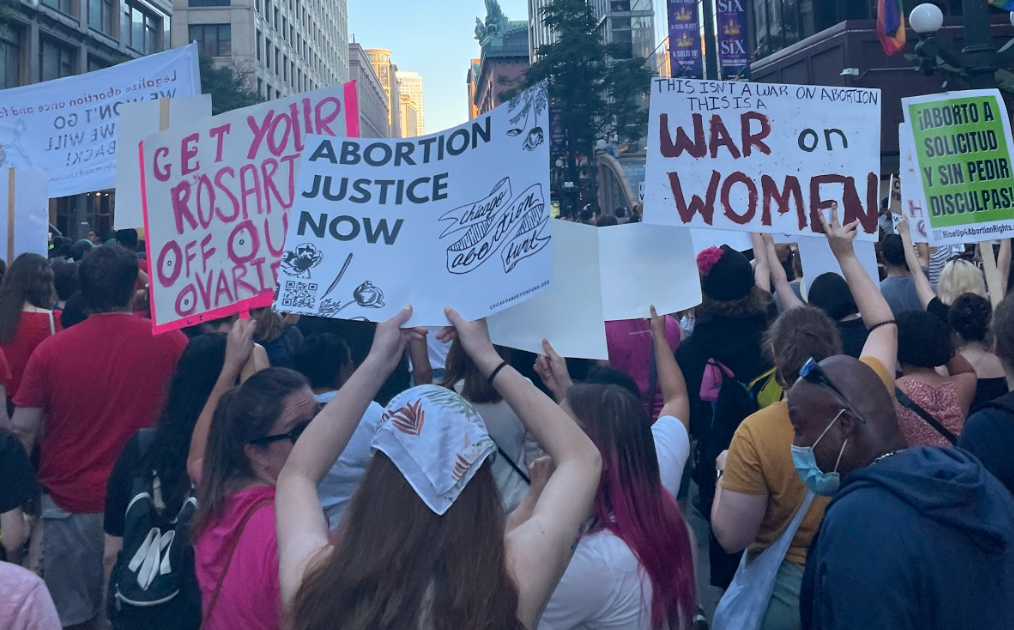 Below is a map with photos from protests throughout the United States, captured by Emory University students. To see images for a specific city, click on the location’s pinpoint and swipe through the slideshow.

For your photos to be included, please email The Emory Wheel at [email protected]

A crowd of protestors covered the street in front of the Georgia State Capitol Building on June 24, declaring that “abortion = healthcare.” While the majority of the people were against the Supreme Court’s decision, waving signs with phrases such as “my body, my choice,” one of the protesters had a sign that read “life wins” in celebration of Roe being overturned. Supporters of the pro-life movement often believe that life begins at conception, making abortion immoral.

Abortion is currently legal until 20 weeks after fertilization. Georgia Gov. Brian Kemp signed a ban on abortion after six weeks of pregnancy — commonly referred to as the “heartbeat bill” — into law in 2019. It was struck down by the federal court, which deemed the ban unconstitutional under the precedent set by Roe v. Wade. However, with Roe now overturned, Georgia will likely implement the ban on abortions after six weeks. Attorney General Chris Carr filed a request in the 11th Circuit Court of Appeals — an Atlanta-based federal court — on June 24 to allow the heartbeat bill to go into effect. The law would contain exceptions for rape, incest, to save the life of the pregnant person and in the case of fatal fetal anomaly.

A large sign saying “bans off our bodies” was displayed on the steps of the Charleston City Hall building on June 24, while another protestor spoke with a megaphone in front of the large crowd.

This precedes South Carolina’s heartbeat bill going into effect on June 27 after a judge reversed an injunction that originally blocked the law. Previously, abortions in South Carolina were legal until 20 weeks after fertilization. However, following the Dobbs ruling, the injunction had no legal basis and was reversed. On a June 28 State Senate meeting, Sen. Rex Rice (R-SC) and Sen. Richard Cash (R-SC) introduced the Equal Protection at Conception No Exemption Act, which would completely ban medical abortions and abortion pills, with the only exception being if the mothers’ life is at risk. The Act would also make it illegal to help a pregnant person get information about how to get an abortion.

Protestors gathered in Chicago in resistance against the Dobbs v. Jackson decision, declaring it a “war on women.” Marching down Michigan Avenue, protestors chanted slogans such as “not the church, not the state, people must decide their fate,” and “abort the court.” Other people held signs with sayings such as “I love someone who had an abortion” and “respect female existence or expect our resistance.”

Illinois allows for abortions before viability, or until around week 24 of the pregnancy. Following the decision to overturn Roe, Illinois and Minnesota will be the only midwestern states that protect abortion until viability. Illinois Gov. J.B. Pritzker has also voiced discontent toward the Supreme Court’s decision, and vowed to protect abortion access. This follows Pritzker’s decision to repeal the Parental Notification Act in 2021, allowing pregnant minors to choose whether or not a legal guardian is involved in their decision to get an abortion.

Surrounded by states which are expected to ban or curtail abortion access in the coming months, Illinois is expected to become an oasis for those seeking abortions in the Midwest. Anticipating an influx of abortion-seeking patients, the state is poised to strengthen abortion access by allocating more funds for abortion clinics and increasing incentives for health care providers to relocate from more restrictive states. Pritzker has also called a special legislative session on abortion rights to increase legal protections of abortion providers and patients, as well as prepare for patients coming to Illinois from out-of-state to terminate their pregnancy.

Protestors gathered outside the Denton Courthouse on June 24 to protest the Supreme Court’s decision to overturn Roe. Several people shared personal stories about getting abortions to the crowd, and several individuals held signs with statements such as “I hope one day women have as many rights as a gun.”

However, abortion services largely stopped throughout the state following the ruling. Texas Attorney General Ken Paxton issued an advisory on June 24 stating that prosecutors can choose to immediately pursue criminal prosecutions based on Texas laws banning abortions in the 1920s, which were enforced before the 1973 Roe v. Wade ruling. With Roe now overturned, Paxton argued that these earlier laws, which were never repealed, are enforceable again. However, a Harris County judge granted a temporary restraining order on June 28 to block the ban. The ruling means that some Texas abortion providers will be able to continue providing abortions until a July 12 hearing.

With a rainbow arched overhead, people crowded the streets of Denver on Jan. 24 to protest the Dobbs ruling with signs such as “bans off my body” and “girls just wanna have rights,” playing off the song “Girls Just Want to Have Fun” by Cyndi Lauper. Other slogans included “revolution now!” and “I’m with her.”

Colorado is one of four states that permits a person to have an abortion at any point during the pregnancy. The other three states are New Jersey, Oregon and Vermont. Although abortion access has been legal in Colorado for decades, it was not directly protected under law until April 4, when Colorado Gov. Jared Polis signed the Reproductive Health Equity Act into law. The Act ensures that a fetus does not have personhood under Colorado law, therefore guaranteeing reproductive care throughout the state.

After news of the Supreme Court’s decision broke on June 24, people crowded into Washington Square Park to protest. Signs included calls for free on-demand legal abortions and the phrase “don’t repeat history” above a metal coat hanger, alluding to past dangerous at-home abortion remedies, which included inserting a metal hanger into the cervix of a pregnant person to abort the fetus.

New York is one of 12 states that protects abortions until viability, meaning until about week 24 of the pregnancy, when the fetus is able to live outside the womb. Other states with these protections include Illinois, Hawaii, California and Massachusetts. Following the Roe decision draft being leaked in early May, New York Gov. Kathy Hochul vowed that New York will be a safe haven for people from other states seeking abortions. She allocated $35 million toward supporting abortion providers, including increasing security at reproductive health centers. New York Attorney General Lititia “Tish” James is also advocating for a bill, which she introduced in May, that would create a state fund for low income and uninsured or underinsured patients seeking abortions.