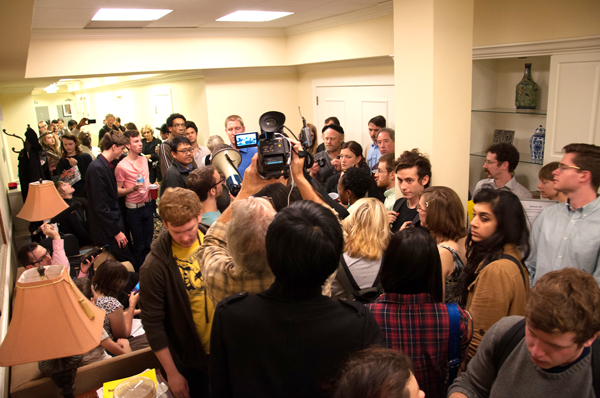 More than 200 University students and faculty protested in front of and inside the administration building on the Quadrangle Tuesday, voicing their concerns about the department changes announced earlier this semester and demanding a meeting with University President James W. Wagner. The protest culminated in a three-hour meeting with Wagner, who called College Dean Robin Forman on speakerphone.

Protesters, many of whom left their classes to join the “walkout” at noon, met on the Quad and vehemently expressed their views on the changes via megaphone. Many held signs with phrases such as “Cut Forman” and “We are Emory.” Protesters also marched around the Quad, each holding a letter to spell out “Reject the Cuts.”

Many local and national media outlets covered the event, including the Associated Press, Fox 5 Atlanta, CBS Atlanta and WSBT Action News. Reporters, cameramen and photographers followed the protest from the Quad into the administration building, and at one point, a Fox News helicopter could be seen circling the Quad from above.

Several protesters then shuffled into the administration building to occupy the fourth floor hallway outside the offices of University administrators including Wagner’s. The protesters remained there for six hours.

The walkout was organized by the student re-visioning committee as part of the #EmoryCuts movement. The movement developed in response to Forman’s plan to reallocate resources and eliminate certain programs and departments within the College, which Forman announced in a University-wide email Sept. 14. Protesters sang as they marched from the Quad to the fourth floor, chanting “no transparency, no trust” and “they say cut that, we say fight that.”

Students said the concept of occupying the hallway was a move born out of frustration with the administration’s previous responses to #EmoryCuts’ protests and rallies.

“We have exhausted all other means of addressing the cuts that were enacted by the administration,” said Navyug Gill, a history graduate student. “We wanted to send a message to the administration and engage in a meaningful debate and discussion about the direction of the university. We [planned] on staying until our demands [were] met.”

More than 100 students and faculty members occupied the fourth floor hallway at around 1 p.m. to not only show distaste for the department changes but also to demonstrate support for those directly affected.

“I don’t think that [our being here] is going to necessarily change the [decision],” Megan Kruer (’08C) said. “It’s important to indicate in a large group that in fact this is not acceptable to a big portion of the Emory community. We want to physically indicate to the University that we are going to try to do what we can.”

The protest arose much to the surprise of University administrators. Gary Hauk, vice president and deputy to the president, exited his office at one point to address the crowd of protesters. He explained to the group that he would schedule a meeting with Wagner, who was out of his office at the time protesters entered the building.

One protester loudly “booed” the proposal from Hauk and was immediately quieted by the crowd.

“As you can see, business cannot be conducted in a hallway full of people,” Hauk said in response to the heckler. “[The protesters] are actually impeding the operations of the office of the University.”

Some protesters were unsatisfied with Hauk’s response.

“You won’t let us study, we won’t let you work,” one protester yelled.

Following a tense exchange, Hauk and the protesters agreed to hold a meeting with Wagner and six protesters once Wagner returned.

Following Hauk’s offer, a small group of organizers conferred and agreed that the meeting would be their best option.

However, not all protesters agreed that a meeting was the optimal choice in moving forward. Some students demanded more of a group consensus to determine what the walkout’s next course of action would be.

Protesters used a megaphone to hold a vote to determine the group’s next move. The protesters overwhelmingly voted to meet with Wagner to discuss the department changes. However, nine protesters voted against meeting with Wagner and instead wanted to occupy the hallway until their demands were met, thus possibly risking arrest for trespassing once the building closed. Following their final decision to meet with Wagner, organizers of the protest strategized in the hallway and discussed which individuals would attend the meeting. They agreed that five students and one faculty member that have been active within the movement would represent the group.

The meeting with Wagner began at 3 p.m. and lasted three hours. Halfway through the meeting, Wagner exited his office to use the bathroom. Those who attended the meeting used the break as an opportunity to leave Wagner’s office and discuss their strategy moving forward with the other protesters.

At that point, the organizers disclosed what had been accomplished in the first half of the meeting, noting that Wagner and Forman agreed to meet with the protesters in a public discussion setting.

However, many protesters felt that the group’s leaders had made a poor compromise. The group then voted and agreed to remain in the hallway until Forman arrived and a resolution to the department changes was reached.

“At this point, the protest met a critical state of negotiation, probably the furthest stage of negotiation either the faculty or students have reached so far,” said Jason Francisco, professor in the Department of Visual Arts. “The discussion is live. No one planned for the meeting to be this long. The occupation of the building has had a significant impact on the [response to the department changes].”

In the middle of the protesters’ meeting with Wagner at 5 p.m., the University locked all doors to the administration building as well as stairwell access to the fourth floor. Security guards waited in the first floor hallway at the doorway entrances.

In response to the protest, the University released a statement, which reemphasized administrators’ decision to “reallocate funds to support other areas of our arts and sciences program.”

The statement also noted, “Since September University leaders have met continuously with faculty and student groups, in both formal and informal settings, to discuss the Emory College plan. The Emory community – faculty, students and staff – are focusing on Emory’s exciting future and working in partnership to implement change that will help Emory College to even greater levels of excellence than it now enjoys.”

At approximately 6 p.m., the meeting between Wagner and the protesters concluded. Both Wagner and the organizers in attendance exited the office and explained to the crowd that they had agreed to schedule a meeting in the future with both Wagner and Forman.

“I think there was a great deal of good faith in doing this,” Wagner said. “The ball is now in my court to get the subsequent meeting scheduled. One thing that is clearly evident is that people are actually uniformly concerned about the future of Emory University.”

Wagner added that the meeting included an “awkward phone conversation with [Forman].”

Following Wagner’s departure, the protesters remained in the hallway to discuss what had been accomplished during the meeting and where the movement was headed moving forward.

“I believe that President Wagner at least wants to work with us and make concessions,” Mullens said.

Some protesters were not completely satisfied with Wagner’s promise of a future meeting. Some said they felt that the meeting was an attempt to delay the process of making a final decision.

Protesters again voted on whether or not to remain in the building until their complete demands were met or accept Wagner’s offer for a meeting and exit the building.

Overwhelmingly, the group decided to leave the building and effectively end the protest.

With Emory Police Department (EPD) officers nearby, the group of protesters walked down from the fourth floor chanting, “We are Emory.”

Following the protest, Katherine Bryant, a fourth-year neuroscience graduate student, said she feels the protest was successful in garnering the attention of both the Emory and Atlanta communities.

“The cuts have hurt so many people,” Bryant said. “They have robbed people of their jobs and their livelihood. We have finally gotten the message out about what the decisions the administration makes does to this community. From now on, Dean Forman and President Wagner will have an audience to those decisions and cannot afford to hide anymore.”

Look to Friday’s issue for the follow-up story with responses from President Wagner and Dean Forman.