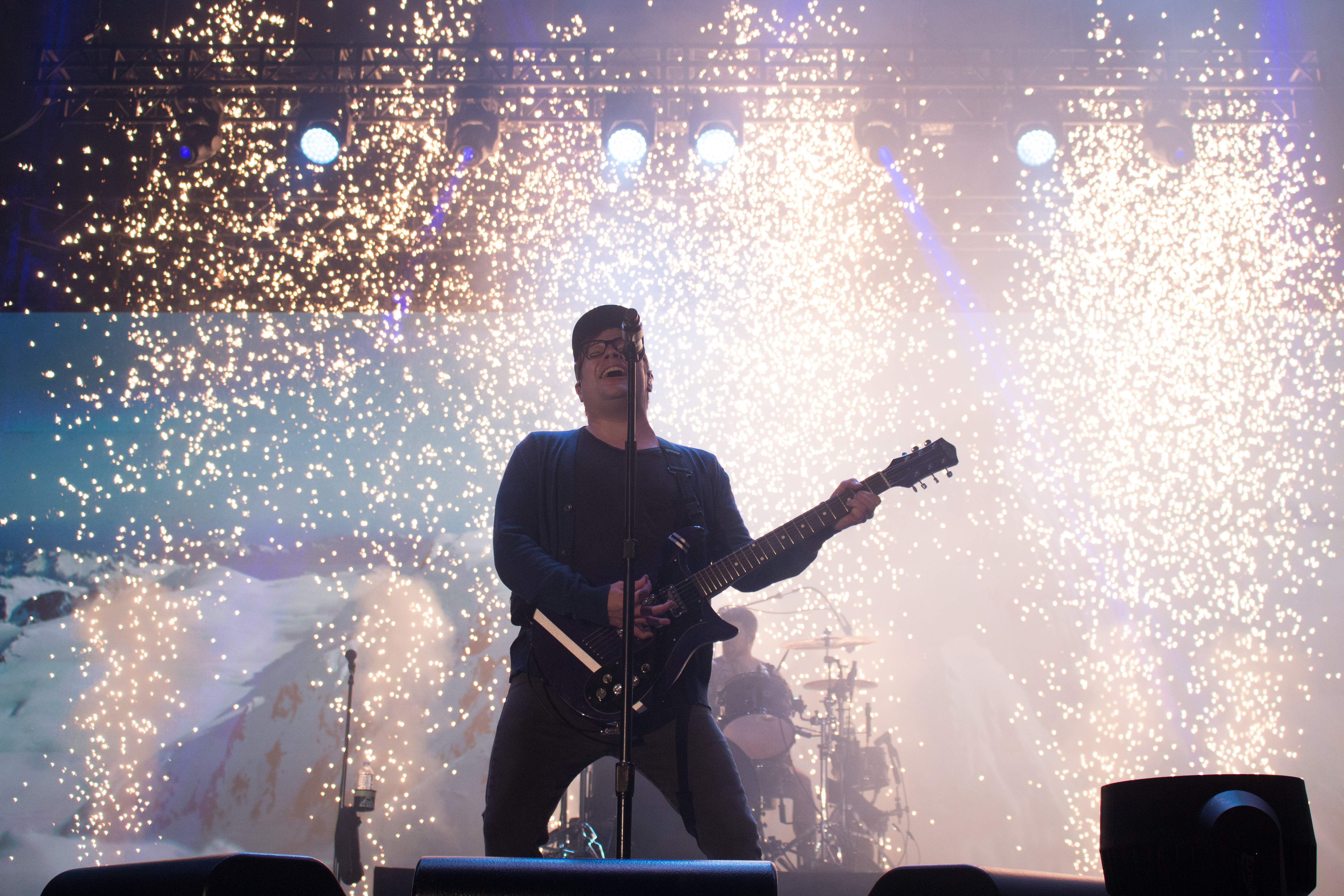 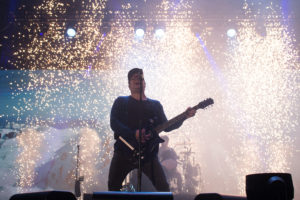 The afternoon drizzle didn’t stop thousands of attendees and 36 artists from gathering at Piermont Park on Sept. 15 and 16 for one of the South’s largest festivals, Music Midtown. This year’s lineup did not disappoint, with headliners across a variety of genres: Kendrick Lamar, Imagine Dragons, Post Malone and Fall Out Boy. From the glowing ferris wheel to the body paint, the park was transformed into a lively festival as the colors glowed under Atlanta’s night sky.

Singer/songwriter Borns took the Roxy Stage on Saturday evening. He started his performance with the popular “Electric Love.” The artist waltzed across the stage, engaging with the audience with swift twirls and ballroom dancing. His song began with a simple drum beat and crescendoed into electric guitars as Borns sang the melody. The guitar’s sounds and his voice fit like puzzle pieces as his music captivated a crowd of devoted fans. Borns captured the electric guitar with his mellow voice throughout the song by extending his lines to his chords.

Soon after, electro-funk duo Chromeo took the Cotton Club Stage. The two performers showed off their shiny instruments — singer David Macklovitch flashing his chrome guitar and his partner, Patrick Gemayel, crashing his hands into a chrome keyboard. They spent the majority of their performance playing hits off their recent album, “Head Over Heels,” with songs such as “Don’t Sleep” and “Juice.” Macklovitch’s all-black outfit and biker’s jacket appropriately matched with Gemayel’s leather vest and their punk-rock music. Both songs were supported by a catchy melody on the keyboard. “Don’t Sleep” felt seductive as Macklovitch synchronized his singing with every beat of the drum, and let his strong voice drop into a soft breath. When it came to the chorus, Macklovitch’s voice was backed by Gemayel’s autotune to harmonize with the electronic background.

The most memorable performance of the night came when rock band Thirty Seconds to Mars took the SalesForce Stage. Within the first few minutes, lead singer Jared Leto kicked the microphone stand and rushed into the crowd. The Oscar winner climbed off the stage while performing “Up in the Air” in his multi-colored kimono, and ran to the crowd to sing beside them. Shannon Leto, Jared’s brother, harshly banged on the drums to start the song. This was followed by added voices chanting the melody. When Leto started singing in the mic, his harsh pronunciation and rock music background turned the park into a dance party.

Shortly after, rock band Awolnation took the Cotton Club Stage. They immediately turned the crowd into a rave with their song “Hollow Moon (Bad Wolf)” as lead singer Aaron Bruno moonwalked across the stage. The song started with a fast tempo electronic beat until it was hit with a heavy rhythmic bass. The group’s electronic voices seemed light yet heavy as the voices echoed. Quickly, the dynamic changed into screaming, which turned into a dance party. Bruno continued to attract cheers from the crowd as he did a robot dance and screamed into the microphone. The dance party died down as Awolnation played the more mild “Seven Sticks of Dynamite.” However, Bruno and the rest of the crew continued to dance across the stage and yell into their mics during the mellow song.

Back from a short hiatus and with a new album, “MANIA,” under their belt, headliner Fall Out Boy ran onto the Coca-Cola Roxy Stage next. Their show started with the intricate sounds of a heartbeat, which were followed by confetti shots into the crowd. They threw it back with their song “My Songs Know What You Did in The Dark (Light Em Up).” Guitarist Pete Mentz attached a flamethrower to his guitar and lit up the whole arena. Starting with their past albums, Fall Out Boy slowly crept forward to their newest album, “MANIA.” They highlighted songs such as “Irresistible,” “American Beauty” and “Immortals” to more of their newer songs, such as “The Last of The Real Ones.” “Irresistible” was one of the milder songs as the song started with a trombone melody followed by heavy guitar and drums to introduce the sharp voice of lead singer Patrick Stump. “American Beauty” began with a very short build-up to the singers screaming into their mics followed by the banging drums. “Immortals” lost no time stopping the brisk momentum as it opened with a flute melody and created a rock dynamic once again.

At the same time as Fall Out Boy was playing with flames, another headliner, Post Malone, took the SalesForce Stage. He was very mellow and emotional, wearing a white outfit and playing songs such as “Better Now” and “Over Now,” which talk about his ex-lovers. A catchy beat supported “Better Now,” a song that describes a past break-up, while “Over Now,” a song portraying Malone’s revenge on an ex, started with an electric guitar solo. Since coming to Emory University in the Fall 2017 for the Homecoming Concert, Post Malone has grown a massive following, especially with his album “beerbongs and bentleys.”

A cool breeze and drizzling rain commenced the second day of Music Midtown, when pop artist Lyric Rachae from the Berklee College of Music was the first to take the stage. Starting in the early afternoon, she performed for a small but mighty crowd that cheered through the rain. Rachae performed covers of songs such as “Stir Fry” by Migos and even previewed her new song, “Paradise.” The majority of her performance consisted of synchronized and sharp dance breaks with her crew.

Returning from his tour around the U.K., Bazzi, styled in a silk Gucci T-shirt with business slacks, took the Great Southeast Music Hall Stage. His song, “Mine,” which went viral on social media, forming an audience that enjoyed his catchy and easy tunes and lyrics. During his performance, his shoelace became untied, yet in what would otherwise have been an awkward situation, he confidently beckoned the audience to sing the national anthem to engage the crowd while he tied them.

On the same stage an hour later, Khalid took it to another level. From the flashing lights to his dance crew, it was obvious that he was one of the most popular artists at the event. He highlighted songs from his debut album, “American Teen,” such as “8TEEN,” “Saved,” “Young Dumb & Broke” and “Location.” His time on stage was like a live theatre, for it was not long before he was on his knees from the overwhelming emotions in his songs. As he ran and danced across the stage, Khalid brought his music to life with refreshing remixes. “Location” felt like a different song as Khalid decided to sing it without the majority of his background music. From pumping his arms in the air to going down to his knees, Khalid was incredibly passionate about his performance, bringing delighting entertainment to his fans.

Kendrick Lamar’s Platinum album “DAMN” featured prominently in the last event of this year’s Music Midtown. Despite opening his show a little late, Lamar’s performance was worth the wait. He started with “DNA,” which pumped the crowd for the songs ahead. Kendrick took it back to his past as he rapped “Money Trees,” “Swimming Pools (Drank),” “Alright” and “B***h, Don’t Kill My Vibe.”

He threw it back to his times in Compton with his track “Money Trees,” as he rapped about getting out of poverty and spending time in his neighborhood. Each hit from the drums and synchronized movement from Lamar escalated the excitement across the park, making it clear that fans were receptive of the overflowing emotions. Lamar slowed his pace down with “B***h, Don’t Kill My Vibe” to fully capture his mindset that wherever he is in his life, no one can stop his message and step him back from influencing the many. It was a fascinating ending that wrapped all the great performances with one magnificent show. During the performance, Lamar told everyone to turn on their camera lights, which lit the whole park like the end of a Disney film. He wrapped up his performance by making a promise he makes at the end of every performance: “I will be back and better!” he shouted, as fireworks blasted from the stage and into Atlanta’s night sky.

Correction 9/19/18 at 3:35 p.m.: The article incorrectly stated that singer Borns performed on Friday night instead of Saturday evening.