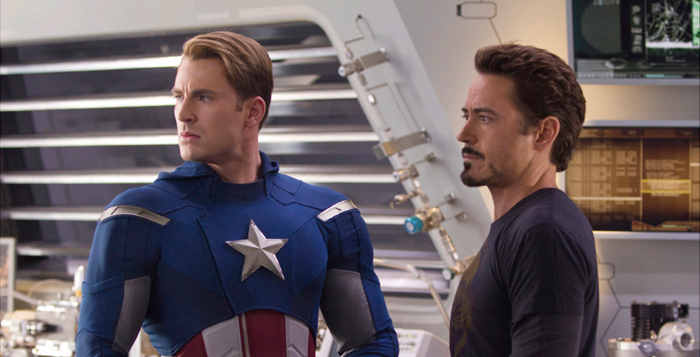 Chris Evans (left) and Robert Downey Jr. (right) star in 2012 box-office-record-breaking smash-hit “The Avengers.” Both actors are set to
star in further installments set in the Marvel Universe and the fan speculation on the possibilities is ablaze. | Photo Courtesy of Marvel Studios

In an era filled with superhero/comic book movies, even more exciting news has been revealed that will shape the direction of the film industry for this decade.

Though Marvel Studios hasn’t officially confirmed the news, Variety has reported that Robert Downey Jr. (as Iron Man) is on the verge of joining the cast of 2016’s “Captain America 3,” alongside Chris Evans in the titular role.

This caused the fandom of Marvel Studios to buzz with excitement and speculate.

Then, also immediately, DC Comics officially revealed their slate of movies after “Batman v. Superman: Dawn of Justice,” which will include their own superhero team-up movie “Justice League.”

The potential of Iron Man’s involvement in this film is huge in the Marvel Cinematic Universe, not only because it marks one more film that Downey will make with Marvel (his contract is set to end after “Avengers 3”) but also because it can affect the rest of the movie schedule.

The day after the news broke about Downey’s possible involvement, DC Comics seemed to counter the hype by officially announcing their own slate of comic book movies.

DC launched its cinematic universe with 2013’s “Man of Steel,” and it will be followed by “Batman v. Superman: Dawn of Justice,” directed by Zack Snyder (“300,” “Watchmen”). Henry Cavill will return as Clark Kent/Superman, presumably battling Ben Affleck’s Batman, in a conflict similar to that of Frank Miller’s “The Dark Knight Returns.” The film is also set to feature Amy Adams as Lois Lane, Jesse Eisenberg as Lex Luthor and Jeremy Irons as Alfred Pennyworth, Bruce Wayne’s butler.

After the Batman/Superman face-off, “Suicide Squad” will be released in 2016. Mirroring the vibe of “Guardians of the Galaxy,” Suicide Squad is the name of the anti-hero team consisting of supervillains working for the government by taking on high-risk, black ops missions in exchange for shortened prison sentences.

However, because the team is filled with hardcore killers edgier than that of “Guardians,” fans will surely be delighted by fan-favorite supervillains like Deadshot and Harley Quinn working together in uneasy, tension-filled environments. According to The Hollywood Reporter, DC is approaching A-list actors such as Ryan Gosling, Will Smith and Tom Hardy for this flick.

Next on the agenda is the 2017 release of “Wonder Woman,” played by Gal Gadot. Wonder Woman will be a demigod daughter of Zeus in this cinematic incarnation.
After her own stand-alone movie, she will have a major role in 2017’s “Justice League Part 1,” also directed by Zack Snyder. It seems that DC is doing the opposite of what Marvel Studios did; instead of having several stand-alone origin stories before the big team-up movie, DC will have the superhero team-up movie to introduce the characters and build the cinematic universe for stand-alone movies later on.

Although DC’s entire schedule has been released, not much information on the movies has been given other than their titles and the actors slated to play the main characters.

In 2018, “The Flash” and “Aquaman” will be released. Unrelated to CW’s television show, “The Flash” is set to star Ezra Miller (“The Perks of being a Wallflower”) in the role of Barry Allen. “Aquaman” will be played by Jason Momoa (“Game of Thrones,” “Conan the Barbarian”).
In addition, the movies “Shazam” and “Justice League Part 2” will be released in 2019. Shazam, formerly known as Captain Marvel, will face off against his nemesis Black Adam, played by Dwayne “The Rock” Johnson.

Finally, the current movie schedule will finish in 2020  with “Cyborg” and a “Green Lantern” reboot. The titular character of Cyborg will be played by Ray Fisher, an American stage actor.

It is an auspicious sign that “Green Lantern” will have a recovering reboot after the failure of the first “Green Lantern” movie in 2011 with Ryan Reynolds.
With these reports, it seems that the executives at DC are going all in to commit themselves to building a cinematic universe.

Marvel is not backing down either, with their President Kevin Feige having planned out films all the way to 2028. Marvel is already in post-production for the 2015 blockbuster “Avengers: Age of Ultron,” and they are currently filming “Ant-Man” with Paul Rudd and Michael Douglas for 2015, while “Doctor Strange” has been confirmed for 2016.

Although the plans might change depending on the financial or critical outcomes of the movies from both DC and Marvel, one can clearly see the enthusiasm of both film studios. Because they are planning so far ahead, the competition will breed diligence and innovation.

The heightened recognition of the genre will inevitably lead to financial success and finally, more superhero movies.

One thing’s for sure: it is a great time to be a fan of comics.