Estrella, a recently opened Yucatan-inspired restaurant, offers many surprises — not all of them good. The luxurious ambience and location were high points, and a few dishes delighted my taste buds. Other dishes were nothing to write home about, though you wouldn’t know it from the high price.

Estrella is slightly difficult to find, located up two flights of stairs near the entrance of The Brasserie at Bazati. Once inside, we were greeted with bustling waiters, loud music, chatting yuppies and an amazing view of the Atlanta skyline visible from the large patio. Throughout our meal, we soaked in the blue tiles and sleek chandelier. Though no one was particularly dressed up, I felt out of place in my T-shirt and windbreaker. It was obvious that Estrella is a restaurant that caters to the well-to-do.

The menu was divided into entradas, masa and platos, or appetizers, dough and entrees, respectively. For appetizers we ordered ceviche and cochinita (pulled pork) spring rolls, and for entrees we chose venison herb tacos, roasted adobo chicken and quesadilla de camarones, a shrimp quesadilla with avocado and queso. Our waitress took our order curtly and remained brusque throughout the meal. 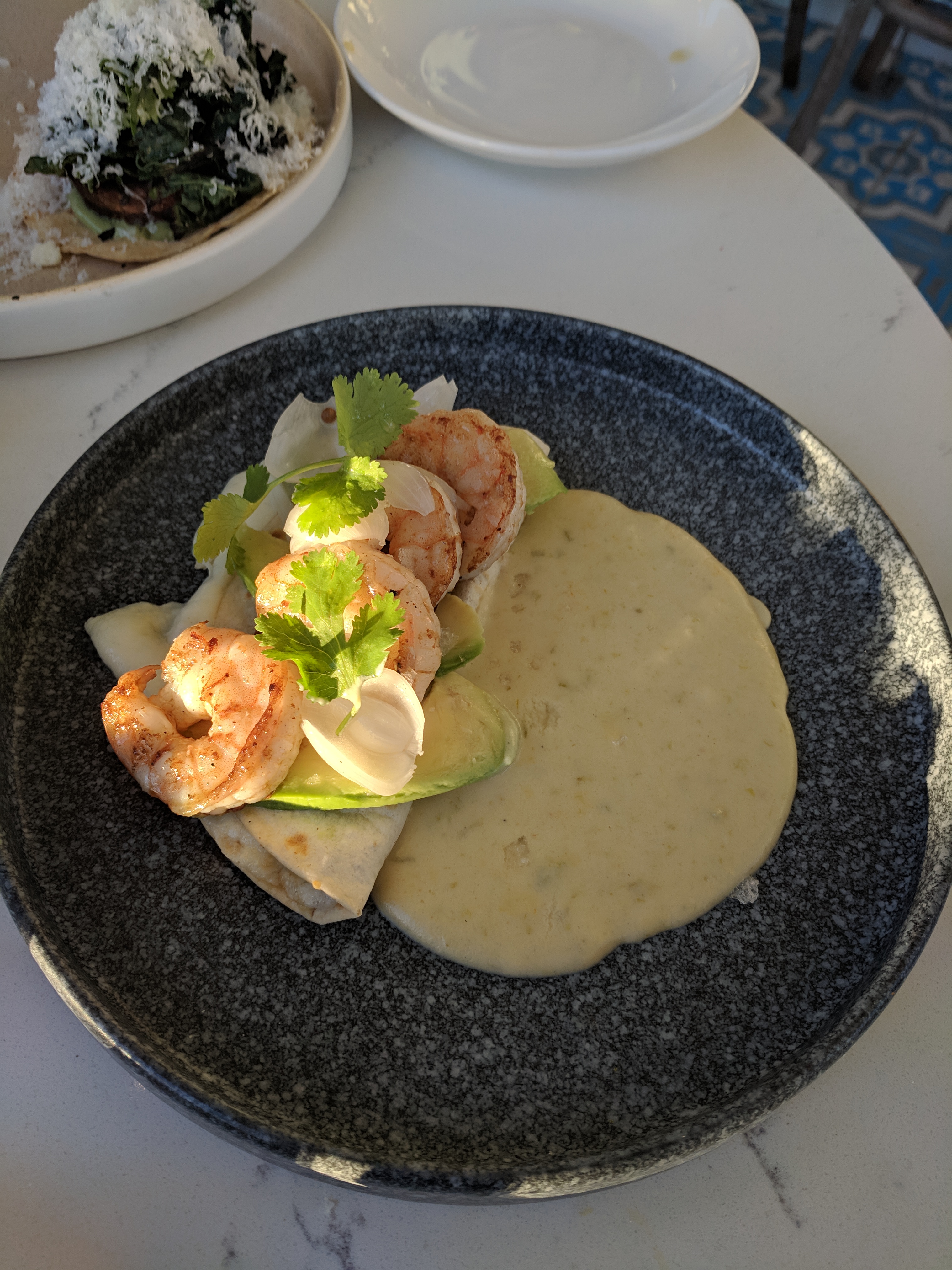 Although the restaurant’s drinks are a major selling point, my underage friends and I could only drink water.

The appetizers arrived quickly. The ceviche, which consisted of crispy tortillas, diced raw fish, root vegetables and pineapple, turned out to be a highlight of the meal. The pineapple was a refreshing departure from the standard lime, and it emphasized the dish’s flavors without overpowering them.The cool, summery flavors contrasted nicely with the salty crunch of the tortillas. In comparison, the cochinita spring rolls, filled with bland pork, were disappointing.

Of the entrees we ordered, the roasted adobo chicken was the standout. The chicken had been cooked perfectly and boasted a flavorful skin. The accompanying pasilla rice, mixed with avocado and pineapple, was creamy and tangy.

The venison in the herb tacos was also cooked to just the right tenderness, but it was overpowered by the grilled kale. When our waitress brought out the venison, two of the three of us sitting at the table began to smell a manure-like scent, which was concerning, but thankfully we deduced it was coming from the patio, not the food.

The quesadilla de camarones was similarly disappointing and not at all what we expected: a plain cheese quesadilla topped, rather than filled, with a stack of onions, avocado and shrimp. Even the well-cooked shrimp and the cheese sauce, called “queso de bola mornay,” couldn’t redeem what was little more than an overpriced and ordinary quesadilla.

The restaurant’s decor and open roofdeck transports guests to what seems like a fancy French bar perched atop the Atlanta BeltLine. Menu prices match the expensive ambiance, with entrees ranging from $14 to $21. And while Robert Solis, a well-known mexican chef working in Merida, Mexico, at the restaurant Nectar, designed the menu at Estrella, several dishes lacked flavor.

Overall, Estrella offered us fairly decent food in return for disappointing service and a hefty price of $92 for three people. If a swanky atmosphere and well-cooked meat are your main criteria, Estrella might be worth a visit.