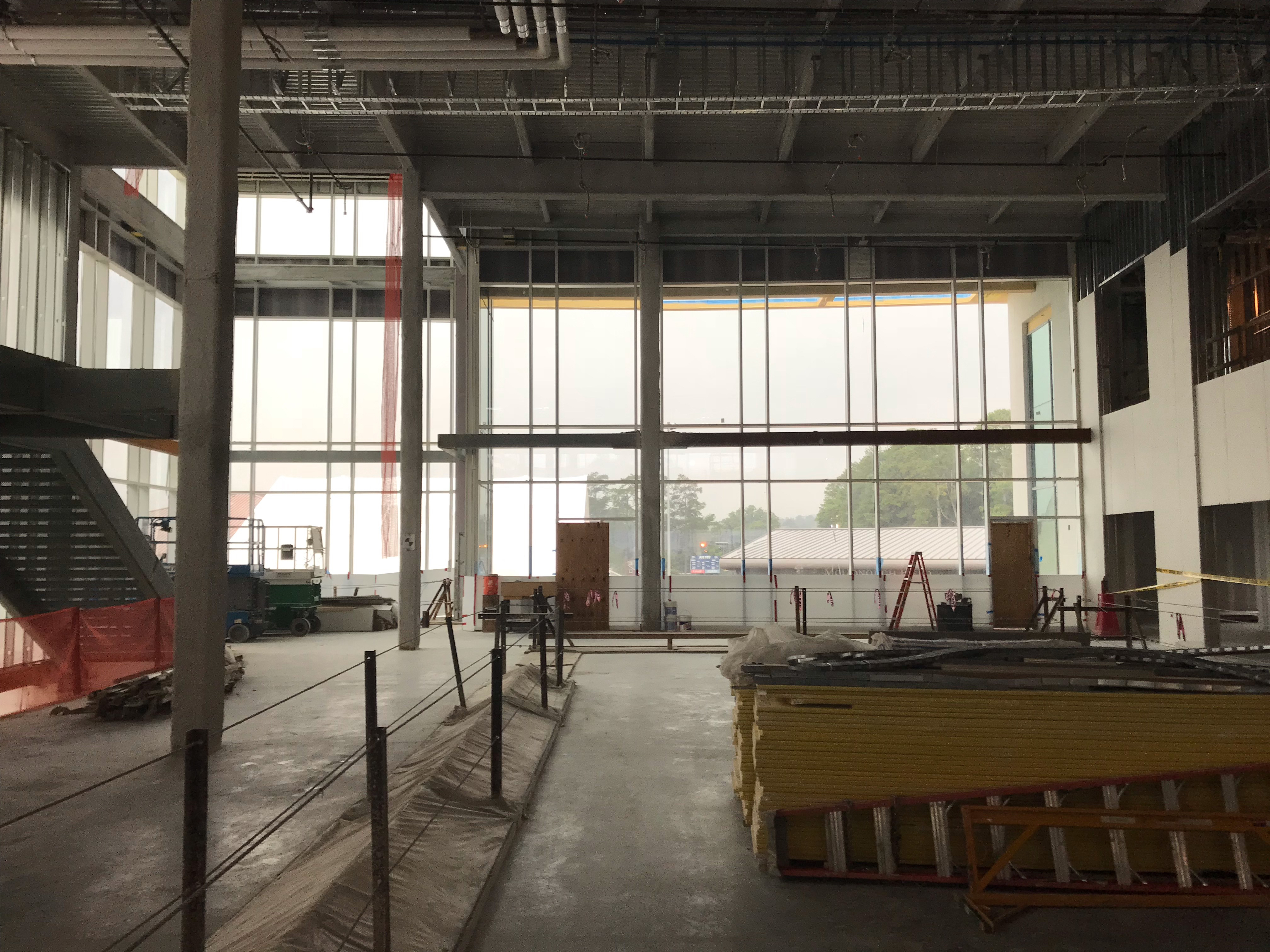 By now, students have grown accustomed to the blue fences, detours and construction of the Emory Student Center (ESC), formerly known as the Campus Life Center (CLC). As the building slowly comes to life, Director of the Student Center Operations and Events Benjamin Perlman and Senior Project Manager for the Holder Construction Company Melissa Drew have begun to lead hour-long student tours of the ESC every Friday for a behind-the-scenes look. The time and day of the student tours will change beginning in  the Spring 2019 semester, in order to reach as many students as possible.

After signing two waivers and donning safety vests, hardhats and safety glasses, the Wheel toured the ESC on Oct. 19.

North Carolina based company Duda Paine Architects designed the building. Around a dozen specialized companies were subcontracted for the construction of the ESC, Perlman said, with nearly 40 contractors working on the $98.6 million project.

“One of the greatest things for me was [to see] how many teams are working together to make sure [the students] have a great experience,” Perlman said.

The ESC has no main entrance — a design decision resulting from complaints about accessibility issues in the old Dobbs University Center (DUC). The landscape design also prioritizes accessibility to every entrance.

The ESC is divided into two primary sections: the north and south pavilions. The pavilions are connected, but are in separate stages of construction, with the south pavilion more developed because the construction team did not have to dig as deep underground to set the foundation as they did with the north, according to Perlman.

Drew, who has worked on construction projects for universities nationwide, said the ESC is distinct for its focus on accessibility through multiple entrances and open spaces unobscured by structural columns.

“This has been a hard, challenging project,” Drew said. “But to be in the middle of campus and to feel the excitement makes it all worth it.”

The north pavilion, which is closer to Eleonore Raoul Hall, is undergoing electrical and plumbing work, as well as drywall treatment. The south pavilion, located near Cox Hall, is nearly finished. Workers are currently painting, installing tile and applying final cosmetic touches to the new dining facility, which will seat about 800 people.

The tour began in the north pavilion’s multipurpose ballroom. The room was filled with construction, but the skeleton of the space was clear. Once completed, the ballroom will be the largest event space on Emory’s campus, Perlman said, with a maximum capacity of 1,600 people. The multipurpose room can be divided into up to six separate meeting spaces via built-in dividers on tracks, which are designed to be soundproof — “except maybe to a heavy metal concert,” Perlman joked.

The multi-purpose space will have assisted listening devices for those who are hearing impaired, Perlman said.

The ESC also features an underground loading dock, which was built to keep delivery trucks and vehicles out of main campus “to preserve the heart of campus,” Drew said.

On the second floor of the North pavilion, Perlman and Drew led the tour through a large common space designed to be a central hub within the ESC. Couches and an information desk will eventually fill the area, Perlman said. Outside the glass walls on the second floor, an expansive patio will showcase a view of McDonough Field and downtown Atlanta (though the DUC-ling currently blocks the skyline). The patio will provide the perfect eagle-eye perch to watch concerts on McDonough Field.

In the later stages of construction, the workers will hardscape and add greenery to replace the DUC-ling. This area could possibly serve as a perfect spot for future Wonderful Wednesdays, according to Perlman. The design plan also incorporates two new green spaces, referred to as “plazas” by the construction team, with one in front of the Alumni Memorial University Center (AMUC) and the other above the ESC loading dock near Raoul Hall. Grass and landscaping, leveled off to create easy pedestrian access, will cover the loading dock. The East plaza, in front of the AMUC, leads down the outdoor stairs that separate the two pavilions. 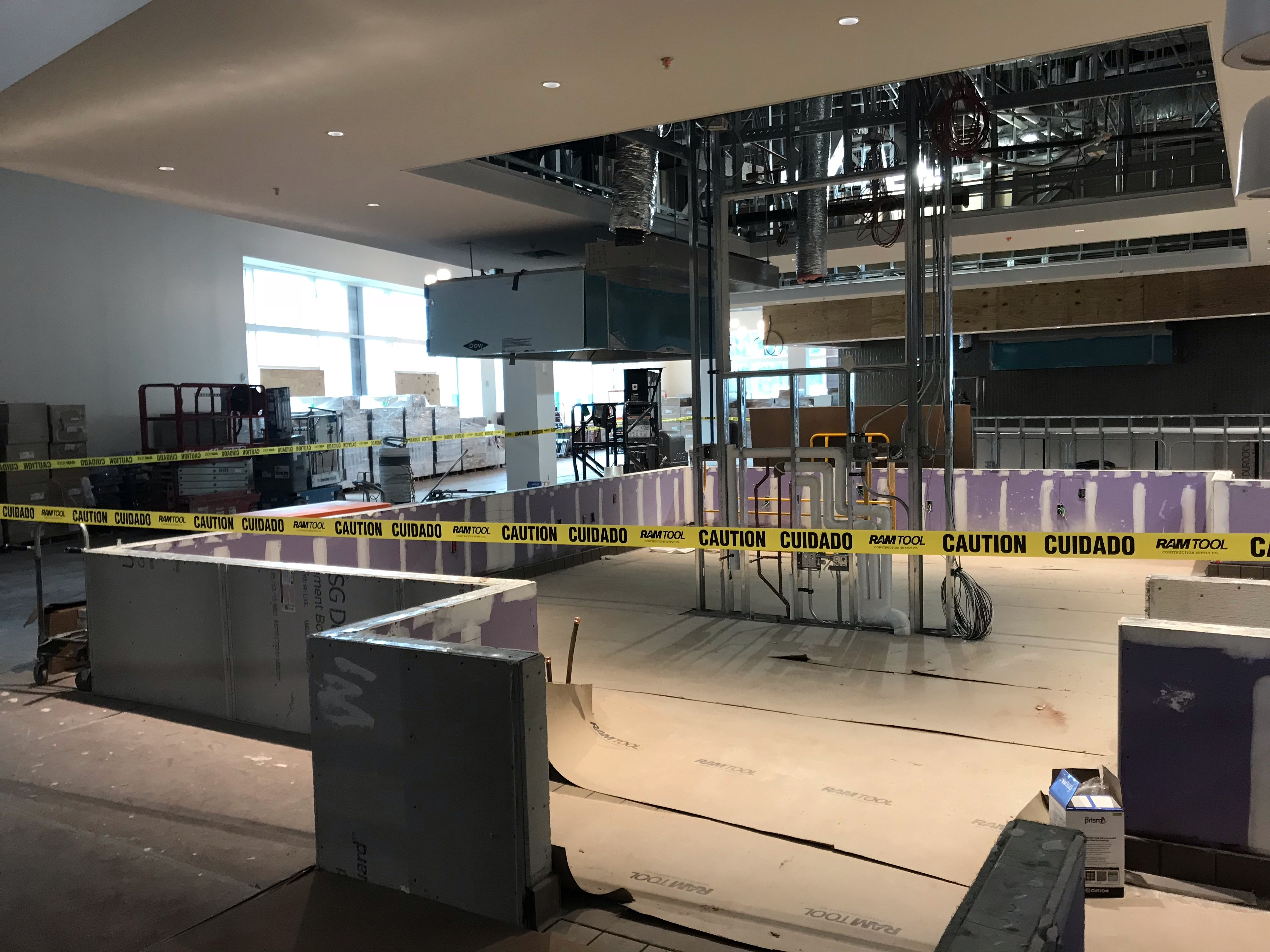 On the south pavilion’s second floor, a new Campus Life office space will be stocked with video games, foosball tables and another Kaldi’s coffee shop. The new dining hall will be located on the first floor of the south pavilion and will fit 200 more seats than the DUC-ling. Though large windows reveal the kitchen, most cooking will occur at individual stations’ Tandoor ovens and flat top grills. Unlike the DUC and DUC-ling, the ESC dining hall will not provide trays, in order to decrease food waste.

Operations will fully transition over from the DUC-ling to the ESC after graduation in May 2019.