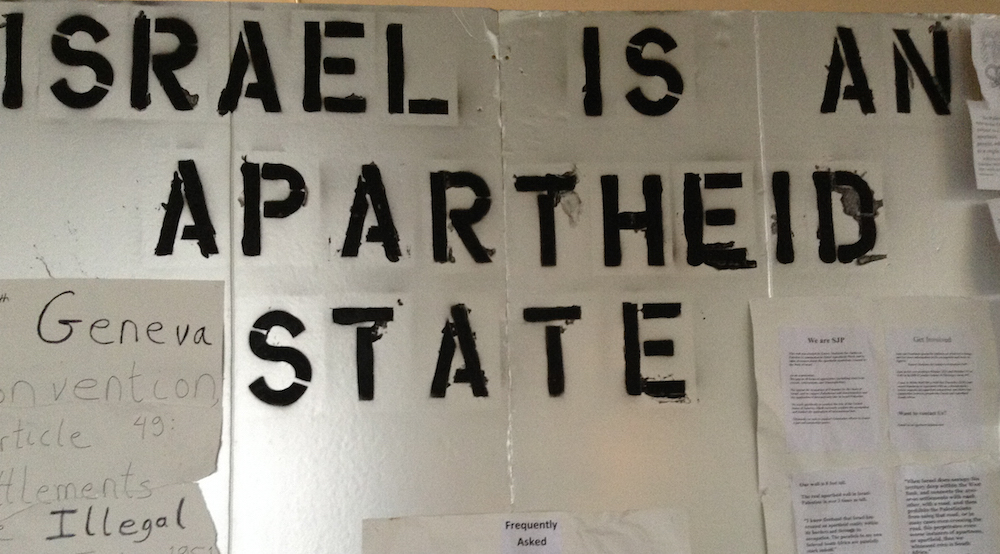 At least one perpetrator tore down and ripped apart a display constructed by Emory Students for Justice in Palestine (ESJP) on the Dobbs University Center (DUC) Terraces on Sunday night and Monday morning, according to ESJP members. The display, a wall that referred to Israel as an apartheid state, meant to raise awareness of Israel’s oppression of Palestinian people.

“The destruction of the display runs counter to our community’s commitment to debate and dialogue,” Nair wrote in the email. “Emory University unequivocally affirms that our community members have the right to open expression without interference.”

The Emory Police Department (EPD) is currently investigating the incident, and the Bias Incident Response Team and Open Expression Committee​ “became aware of the incident and responded immediately” after a member of ESJP submitted a Bias Incident Report on Monday, according to Matthew Garrett, the interim senior director of the Division of Campus Life.

Garrett added that Campus Life staff met with ESJP members on Monday morning “to discuss the incident [and] provide them with support, as well as outline options and next steps for their open expression display and bias incident reporting processes.”

A spokeswoman for the EPD declined to comment on the investigation.

College sophomore and ESJP President Jonathan Hussung, College senior Kolia Kroeger, College junior Dina Masri and two other members who asked not to be named due to the sensitivity of the issue, assembled the standing display from around 10:30 a.m. to 7 p.m. Sunday​, according to Hussung, who added that they returned to the DUC around 10:30 p.m. the same day to find the collage’s bare frame. (Hussung identifies as a non-binary gender and prefers the gender-neutral pronoun “they.”)

The following morning, Hussung said they began stapling sheets of paper containing information previously displayed by the wall collage onto the frame around 12:50 p.m. on Monday. Hussung returned to the DUC around noon to find the perpetrator tearing those sheets down as well.

“I heard someone screaming ‘Fuck you and your fucking wall!’” Hussung said. The student who took down the papers, before heading upstairs to the second floor of the DUC, told Hussung to “eat shit, you motherfucker” as Hussung attempted to film him using a cell phone camera.

Hussung did not know the identity of the perpetrator, and again called EPD. Hussung said they submitted a Bias Report on Monday around 8:15 p.m. for the vandalism and verbal assault that occurred over the previous two days.

“I was not feeling very safe,” Hussung said of the Monday encounter. “What made me feel that way was the fact that they would hurl such hurtful words at me just because I was associated with a wall that was supposed to educate you.”

ESJP constructed the wall as part of Israeli Apartheid Week, an annual international awareness week that seeks to draw attention to harsh policies of the Israeli government on the Palestinian territory, which lies within Israel’s boundaries, according to ESJP member and former Palestinian citizen Masri, who added that the act of vandalism hit her on a personal level.

“That’s hurtful to me — to try to take the truth away — because there is oppression going on there,” she said. “I know. I’ve lived there.”

Masri was born in the U.S. and moved to Palestine with her family at age three. She returned to live in the U.S. during second grade but said she moved back after the Sept. 11 attacks on the World Trade Center in New York. She said she understood that Israeli Apartheid was “an emotional issue” but added that ESJP did not mean to discriminate against any nationality.

“This is in no way anti-semitic — it is not okay to discriminate against any nationality,” Masri said, adding that she has faced plenty of such discrimination herself.

“I’ve had people come up to me and scream at me, saying that I’m a terrorist,” she said. “That kind of discrimination is not okay.”

Hussung added that the group had not meant to target Jewish people.

“One of the most important distinctions we want to make in this issue is that being Jewish is not the same as being Israeli, or as agreeing with Israeli foreign policy,” Hussung said. “People are demonizing us without even reading what’s on the wall, and they can’t, because people keep tearing it down.”

ESJP reassembled the wall, which read in black spray-painted letters, “Israel is an apartheid state,” late Tuesday morning. It held a sign reading “4th Geneva Convention, Article 49: Settlements Are Illegal, Signed by Israel in 1951,” in reference to the Convention’s article banning an occupying state from allowing citizens to settle in occupied territory, namely, Palestine.

It also displayed a list of frequently asked questions, such as “What is Gaza and what is Hamas? Why was it in the news over the summer?” and information on the wall separating Palestine from Israel and ESJP’s political stance.

“We oppose all forms of oppression (including anti-Arab racism, anti-semitism and Islamophobia),” the group wrote in a paper posted on the wall. “We oppose the occupation of Palestine by the State of Israel, and we support Palestinian self-determination and the application of international law in Israel-Palestine.”

The wall stood at the Terraces as of late Thursday afternoon.

“We will not be silenced by fear,” Hussung said.

In his email, Nair wrote that free expression is open to all students but also offered a cautionary message.

“…we understand that — while the demonstration wall is an expression of free speech — it may be painful for some members of the Emory community,” Nair wrote. “We ask all members of our community to weigh these responsibilities carefully when exercising their right to open expression. Let us deliberate ideas, ideologies and policies with which we disagree, rather than target individuals or groups with whom we disagree.”

Regarding Nair’s recommendation for students to “carefully” exercise their free expression rights, Hussung wrote in an email to the Wheel that ESJP members “have facts on the wall, facts about Palestinians’ human rights being violated by the state of Israel.”

Hussung wrote that “it may be painful for some people to face those facts,” but that “it is essential that we have all those facts, because the pain experienced by Palestinians who are living (and dying) under apartheid cannot be eclipsed by the pain of wrestling with the reality of the consequences of Israel’s actions.”

When asked whether the University would provide protection for student groups when their rights to freedom of expression are threatened, Garrett wrote in an email to the Wheel that, as expressed by the Open Expression Policy, “any individual group can make a request for additional security, and Campus Life will help support that decision.”

ESJP has declined security assistance for the group’s wall, according to Garrett and Hussung.

Andrew Alter, vice president of Israel Affairs for the Jewish student group Emory Hillel, sent out an email regarding ESJP’s Israeli apartheid wall to members affiliated with Hillel around 10 p.m. on Sunday.

In his email, he urged Hillel members to post pictures of themselves in Israel or Israel-supportive websites on social media on Tuesday, to stop by Hillel’s Wonderful Wednesday table this week and to attend a question and answer session event on Thursday at 7 p.m., the location of which was yet to be determined.

“We think [the wall] is counterproductive towards a conversation on the oppression and suffering of people in the Middle East,” Alter said in an interview with the Wheel. As for the email, he said members affiliated with Hillel thanked him for urging them to show their pride of the Jewish state.

Alter added that the Jewish student group sent a message to members discouraging them from tampering with the wall.

“We do not support this,” he said. “No one [in Hillel] I talked to supported this.”
Katie Fishbein, a College junior and member of Hillel, said she was upset that the Jewish student group didn’t immediately send out a campus-wide email condemning the vandalism of ESJP’s wall collage.

“While I truly, vociferously disagree with what’s on that wall, it’s extremely important that they have the right to express their views,” Fishbein said, adding that she had initially asked Hussung if ESJP had taken it down on their own when she heard about the Sunday incident.

Fishbein added that “putting up a wall” may not be the best method of creating conversation, and that “it’s sometimes not what you say, but how you say things that matters.”

In a later email to the Wheel, Fishbein said she did not condone Hillel’s responsive Truth Wall, which was erected on McDonough Field Wednesday.

“That the plan to respond was to build a Truth Wall to counteract the initial Apartheid Wall, I am so sorry for that,” she wrote. “Building walls, figuratively and literally, puts up blockades to dialogue and to progress. Yet that doesn’t warrant a response of vandalism.” 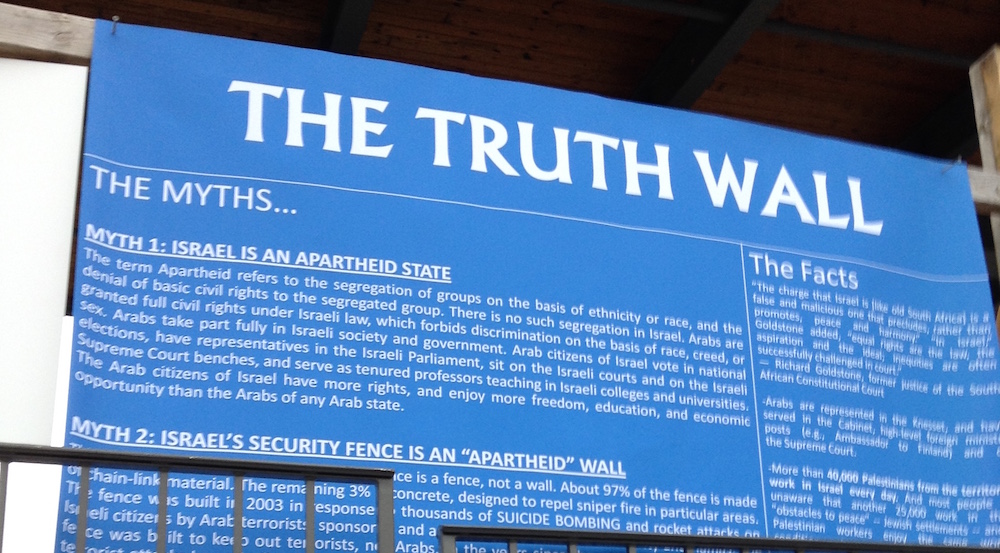 In response to the SJP wall, Jewish student group Hillel erected their own “Truth Wall” on Tuesday on McDonough Field. Photo by Melissa Defrock / Staff

The Truth Wall, a blue poster with white tape, was divided into two sections: “The Myths” and “The Facts.”

Under the latter heading, four paragraphs of text included statements like, “Arabs are represented in the Knesset, and have served in the Cabinet, high-level foreign ministry posts” and “More than 40,000 Palestinians from the territories work in Israel every day.”

Beneath “The Myths” were three paragraphs under the headings, “Myth 1: Israel is an apartheid state,” “Myth 2: Israel’s security fence is an ‘apartheid’ wall” and “Myth 3: Israel commits war crimes by killing civilians.”

Hillel also held a pep rally at the Woodruff Health Sciences Center Administration Building on Thursday night as part of its initiative in response to ESJP’s Israel Apartheid Wall.

Ethan Arbiser, a Hillel member and College sophomore who is also associated with Jewish student group Chabad on Campus, wrote in an email to the Wheel he thought the perpetrator’s tearing down the ESJP wall was “completely inappropriate.”

He added that the Truth Wall “gives people a better perspective” on the conflict between the state of Israel and residents of Palestine.

“It allows the students unfamiliar with the conflict to see both sides of the argument,” Arbiser wrote. “Most importantly, the Truth Wall constructed [on Tuesday] illuminates many of the misconceptions about Israel that are posted on the Apartheid Wall.”

“We erected the Truth Wall not as a way to end conversations but to show people walking by that there is another side and, if interested, they should try to learn more,” Alter later wrote in an email to the Wheel. “Hopefully next year, no one will build walls, and we can instead devote this time towards planning informative events together.”