An Inside Look: the New Campus Life Center 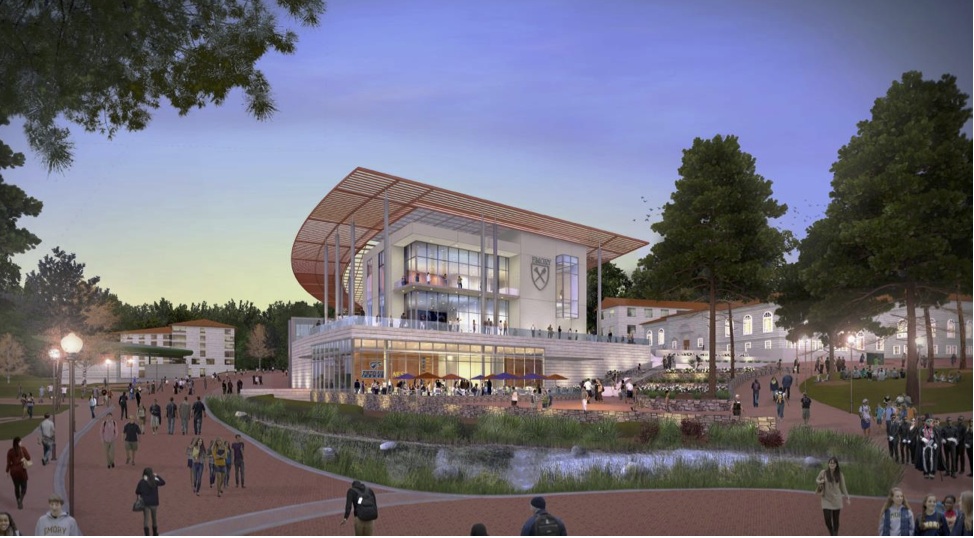 “If I had to describe the new building, I’d say it’s an extrovert,” Turan Duda said.

Duda is a design partner at Duda Paine Architects, the firm that — along with its partner MHTN Architects — beat out five other semifinalist firms to transform the west end of the Dobbs University Center (DUC): Dobbs Market, Emory Mail Services and Eagle’s Landing — by late 2018.

The plans for the new building, — which will be called the Campus Life Center (CLC) —will emphasize creating social, flexible places as well as overall sustainability. The CLC is awaiting approval by the Board of Trustees and Ways and Means Committee.

Early this year, a separate construction firm recommended that the University demolish the DUC’s west end and construct an event space with room for 1,600 people. The feasibility study estimated that the project would cost $98 million while Director of the DUC Ben Perlman said construction costs — the prices of drywall, wood and other building materials — could reach a slightly less staggering $57 million.

The plan, the firm’s most popular design among students, consists of three small buildings in place of one large structure.

Duda described this design as a set of three pavilions with “an enormous number of terraces” connected by a piazza beneath a canopy structure.

Duda said the plan is to make the dining area feel more like a series of restaurants, while the pavilions, along with the preserved Mary Gray Munroe Theater, would have “the look and feel of a village.”

He also emphasized the importance of keeping campus buildings relatively small, noting that most of Emory’s buildings are “appropriately scaled,” with a couple of exceptions.

“A building that’s too large — it sticks out,” he said, pointing to the Woodruff P.E. Center and the DUC’s current west end. Despite the sizes of the buildings, Duda said, the unified structure would still support 1,300 to 1,400 people for large-scale events, such as Commencement.

In addition to areas for social gatherings and events, Duda Paine has made sustainability a priority in its early planning. The canopy between the buildings, according to Duda, would collect rainwater, while an area of the building underneath the plaza would hold a “geothermal heating and cooling” system. The new structure’s large windows would bring in a lot of natural light, unlike the current DUC, which Duda called “introverted.”

For now, Duda Paine has been working on “topographic problems” with the area that now serves as the foundation for the west end of the DUC, but they’ve also been learning the ins and outs of the University itself.

“We just want to learn as much as we can about the culture of the campus,” Duda said.

University administrators involved with the project, meanwhile, are “working out square footage,” according to Perlman. Upcoming on his agenda, he added, are furniture purchases and, after approval, a temporary dining hall to replace the Dobbs Market and Mail Services. Furniture, he said, can be chosen well before construction begins, and will determine the feel of the interior.

“How do you want to make it feel? Do you want cool colors, warm colors?” Perlman said of the interior design, adding that he hopes to have ample student input throughout this process in particular. “It’s more about detail and what the community wants to make it an Emory building.”

Originally, up to 30 firms competed for the opportunity to build the CLC. The executive committee reviewed Duda Paine’s past projects, as well as feedback from former clients and Emory faculty, students and staff, while the Board of Trustees’ Real Estate Building and Grounds Committee evaluated the firms’ design proposals.