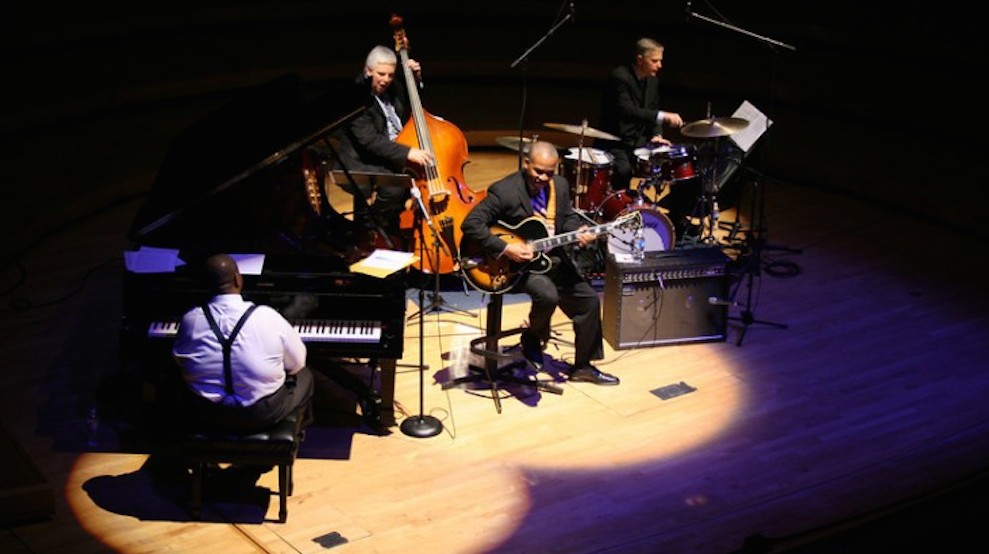 Emory’s Big Band and the Motley Trio, featuring special guest Alex Lattimore, took the stage on Jazz Fest’s second day in the Schwartz Center for Performing Arts and showcased the talent of the students and the stunning genre of jazz music.

Director of Jazz Studies at Emory Gary Motley led the Motley Trio on the piano, with Rodney Whitaker on bass and Carl Allen on drums, filling the Trio to the brim with leading jazz musicians.

Sixteen Emory students comprise the Big Band, also led by Motley, and the band is made up of 13 brass instruments, piano, bass and drums.

The Emory Jazz Alliance aims to support jazz education and performance at Emory, according to Siegelson.

He also ensured that jazz will be a part of Emory Arts forever, and the audience seemed to wholeheartedly agree.

The Motley Trio started the show without a word of introduction. Instead, Motley greeted the audience with a piano riff.

Whitaker and Allen joined in after a minute, and as the three musicians came together, people began tapping their toes and nodding their heads to the beat.

Motley used every piano key to his advantage and the sounds of the three instruments blended together wonderfully.

Motley composed all songs performed and had rehearsed them with the Trio for only a short time, but there was no indication of this in the performance.

After three songs, Motley approached the microphone and said to the audience, “I’m sorry. I didn’t see you sitting there.”

With a chuckle from the audience, Motley spoke about the other members of the Trio and Regina Carter, a famous jazz violinist who had performed the previous night along with the Trio.

She also, along with the Trio members, taught and shared her passions with students in the Jazz Studies program through improv performance and composition workshops.

Motley then introduced the special guest for the evening, Alex Lattimore. Lattimore is an accomplished jazz vocalist and horn player whose solo album, Promise, was considered for Best Jazz Vocal album at the 2008 Grammy Awards.

He accompanied the Trio with vocals for three more songs. If anything had been missing from the Trio’s performance, Lattimore’s smooth, deep voice was exactly that.

After the Motley Trio and Lattimore performed, the Big Band filed onto the stage. The first song, “This I Dig of You,” mirrored the smoothness of the Trio’s performance with the piano and bass.

The addition of the brass instruments gave a sense of structure to the performance’s previous effortless quality.

Every song performed by the Big Band built on the amazing position with which the Motley Trio left the audience as well as on every subsequent song. Whitaker and Allen joined the Big Band and then Motley returned to his place at the piano. This exemplified the goal of Jazz Fest. It was the integration of generations and passions for the genre.

Jazz has the ability to sound completely effortless, masking the precision and structured rhythm. This performance showed both of these aspects of jazz with the smoothness and calm of the performance of the Motley Trio and the structured aspect that is associated with the Big Band style.

Big Band music is very closely associated with jazz, so the performances of the two groups allow for this dichotomy within jazz to shine through.

Each performance built on the last, as indicated by the applause from the audience. The excitement and applause of the crowd was just as important to the music as the bass, piano and brass.

The Jazz Fest audience was fully invested in the performance and in support of the Emory Jazz Alliance.

With this performance and Jazz Fest at Emory in general, Motley achieved the goal of the Jazz Studies program and the Emory Jazz Alliance.

With this performance, the promise of the president of the Emory Jazz Alliance could not be denied. Jazz will be a part of the Emory Arts program and the Emory community forever.

After his performance, Lattimore told Motley, “Thank you for keeping this kind of music alive.” The audience seemed grateful for this as well, and through this performance, Emory musicians certainly played their part in keeping jazz alive at Emory.