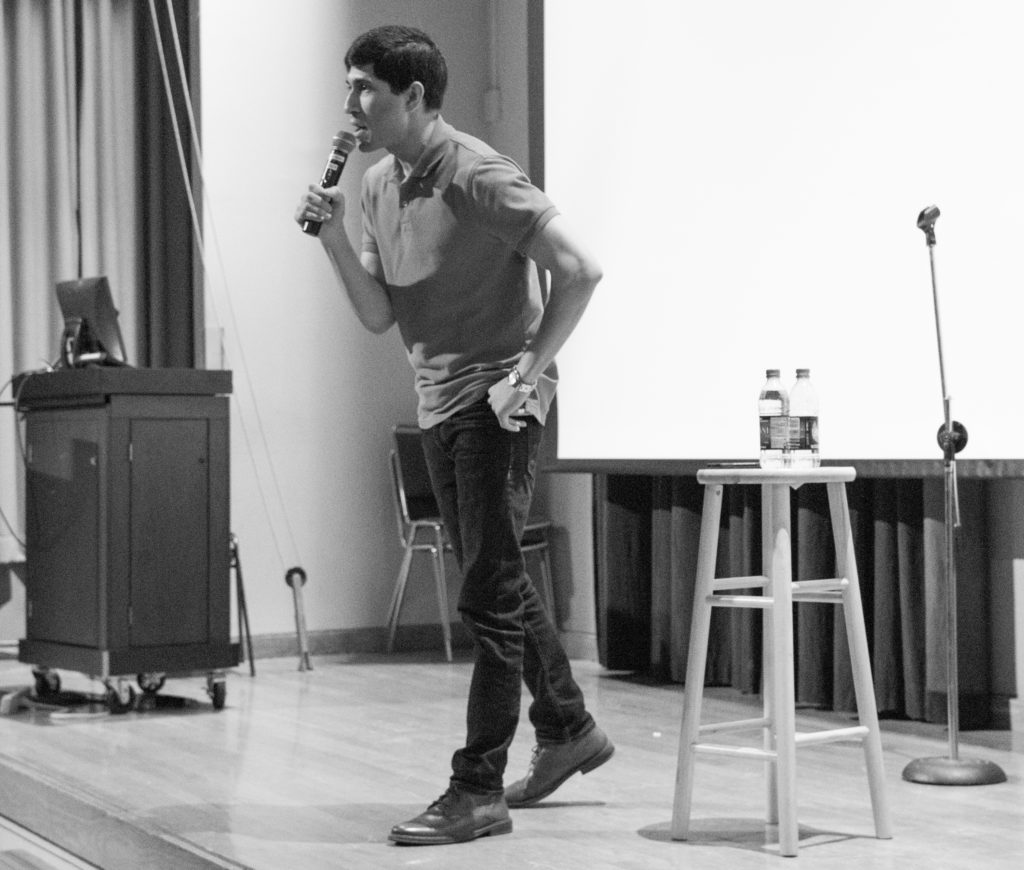 “To all those who accidentally picked up bags of jalapeno popcorn at the reception desk, feel free to pick up a bag of regularly salted if you so choose,” Rovner said.

The incidentally jalapeno-infused snack encapsulated the mood of the small auditorium: less-than-professional. A whiteboard to the right of the stage decreed “Jai Alai” in all caps, with square boxes (probably) depicting strategy for the game. Two audience members vehemently discussed the “Alvin and the Chipmunks” movie lineage, muttering “Squeakquel” and “Chipwrecked” to themselves while chuckling. As 7:30 p.m. rolled around, someone whispered, “Wasn’t this supposed to start at 7 [p.m.]?”

Rovner rose again, fumbling with the standing microphone center stage. He mumbled through some achievements before nervously beckoning the act to the stage. The applause was light and scattered.

This ambience was the precursor to comedian Alingon Mitra’s performance Oct. 18 for Homecoming Week. Despite the slow opening, Mitra — who has appeared on both “Conan” and “The Late Show with Stephen Colbert” — defied all odds, captivating the room through a fantastic performance.

One could be quick to judge Mitra by looks alone. Donning a polo vest, jeans and old sneakers, he rocked a bang-leaden head of black hair and bushy eyebrows. Though he is 30 years old, his diminutive stature and cherubic face suggested that he could pass for an undergraduate student. As he jogged atop the only slightly elevated stage, the crowd hushed. He began to speak.

Mitra instantly apologized to popcorn eaters everywhere on behalf of the “jalapeno mix-up.” The crowd, and particularly those affected by the incident, let out a laugh. He launched straight into crowd work, calling on audience members by name to build rapport.

At one point, he asked if anyone was born internationally, to which Marc Ayad (20C) answered that he’s Egyptian. “Ah, ‘Marc,’” Mitra replied, “What a classic Egyptian name.”

Mitra gestured to the boy on my left. “You, what’s your name?” he asked. “Greg,” the boy responded. Mitra took a second to sip one of his two bottles of water. “Cool,” he said, before moving on to his next target.

As his set continued, the room acquired a different feel. The air, rife with laughter, seemed warmer than before, the lights brighter. As the comedian rattled through his trove of topics — Disney, Cotton Eye Joe and Katy Perry, to name a few — the crowd stood rapt, awaiting his next turn of phrase and clever witticism. He had won us over.

Though the punchlines, material and crowd work were thoroughly enjoyable, some fell flat. For example, his observation that Pluto, Mickey Mouse’s dog, received far harsher treatment in the Disney canon than did Goofy, the anthropomorphic dog, elicited little reaction from the crowd. It wasn’t a fresh take on the idea; in fact, Bo Burnham shared a similar observation in his popular 2010 special “Words Words Words.” Similarly, his shtick on some of Santa Claus’ festive behaviors, such as monitoring children, tracking “naughty boys” and getting toddlers to sit on his lap, seemed overstated and stale.

Rather, Mitra’s affable nature and friendly smile crowned him a fan favorite. Even when he called out audience members for their clothing, habits or appearances, it felt as though he approached it from a place of curiosity rather than malice. This charisma also let him get away with some of his best, if not most, controversial lines. When he asked if the crowd was into Santa, some replied, “Eh. We’re Jewish.” “How much of Emory is Jewish?” he asked. Disengaged, the crowd responded, “A lot.” Taken aback, he paused for a second at our meager response. “You sound like you have a problem with that.” The crowd erupted.

After the show, Mitra proved his assumed friendliness in a short interview during which he seemed more than happy to answer my questions. Mitra said that he found his start in stand-up comedy seven years ago, performing at scattered open mic nights in his home city of Worcester, Mass. Only after the interview did I realize he began stand-up comedy after graduating from Harvard University, a detail he had conspicuously failed to mention. He said that as his reviews became more and more positive, he was eventually rewarded with the honor of paying gigs. From there, his career took off.

“I’m a firm believer in the Nike ‘Just Do It’ mentality,“ Mitra said. “[Stand-up] is just me training. I shouldn’t be winning the game right off the bat.”

Mitra’s humility was apparent not only when it came to his own accomplishments but also to his grander line of work as a stand-up comic.

“I don’t know if stand-up is important,” Mitra said. “It’s a good way to discuss ideas and a good way for people to come together. But I wouldn’t say it’s huge.”

I agree. There are definitely bigger, more important things than stand-up. But what made Mitra’s set so enjoyable wasn’t that it was “just” stand-up. Rather, it was the implication that there was a tenderness hidden behind it. Smiling through his delivery, laughing during audience participation and taking his sweet time to enjoy every taste of water, Mitra seemed like a guy you’d want to know on a deeper level.

After shaking my hand and looking me in the eyes, he asked me to friend him on Facebook and reach out if I had any further questions. I thanked him and walked away, sending a friend request as I left. Two hours later, he accepted.