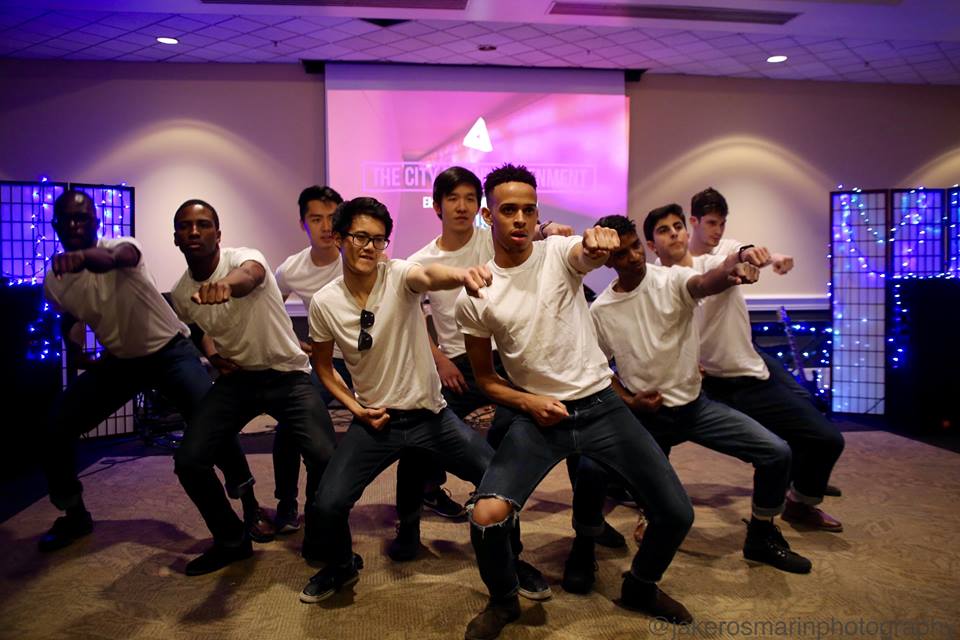 Only two years ago, the Emory Arts Showcase was held in a White Hall classroom. This year, on March 19, it was a multi-room production taking up the entirety of Cox Ballroom, even turning the hallway into an art gallery with the free prints and business cards of student artists.

Hosted by Emory Arts Underground, the show featured over 70 student artists and performers, including dancers, musicians, poets and more.

One of the most memorable performances from the night was a duo arrangement of Ludovico Einaudi’s “Nuvole Bianche” by College juniors Nathaniel Sawyer and Daun Kwag.

As the lights dimmed, white words were projected onto a black screen behind them. Their piece, entitled “What is Essential,” consisted of Sawyer’s musical arrangement, which he performed on piano, Kwag on violin and speakers who read written words aloud. The projected words on the screen behind him disclosed Sawyer’s feelings of being unseen — even when he passes by friends and peers. Rather than looking deeper, their eyes sweep over him and merely soak up the superficial. These feelings clearly resonated with the audience, as friends began to fold into one another, and the soft sounds of sniffles slowly spread around the room. The concluding lines projected served as an impetus for the speakers to follow, expressing that not only is Sawyer unseen, but that he is also guilty of not looking into others, as well. As an audience member, I came to recognize that I, too, am guilty of looking through strangers, cautious not to invade their space, but through this, I inadvertently fail to acknowledge their existence.

As Sawyer continued playing, speakers stood up to share their respective experiences in regards to feeling unseen by peers, and the audience of strangers began to examine the personal weight that comes with hidden feelings. A basket of tealights was then passed around, and as audience members flicked them on, “The City of En(light)enment” truly embodied its name by embracing the raw and intimate community it formed. As incredible as it is to bear witness to the infinite complexity and depth that is within all of us by nature of our humanness, it is also incredible to share one’s vulnerability and bravery.

It seems that too often, amidst pre-professionalism, the competitiveness and drive of students at Emory overshadow their souls. The purpose of events such as The City of Enlightenment is to showcase the diverse talents of the Emory community and give performers an outlet to display their creativity.

Only a College freshman (“You’re a freshman?” College junior, executive board member of Emory Arts Underground and emcee Bethany Studnicky couldn’t help but question from the sidelines as he shyly introduced himself to an already affectionate crowd) and performing without the usual comforts of his guitar, Jamariel Hobbs gave a standout performance. Between being a member of the a capella group AHANA, performing at the Media, Literature and Arts Outreach (MLAO) house’s Rock the Row and winning second place at a competition earlier this year held in Harland Cinema, he has delivered memorable solos on campus throughout the year. This time, singing Sam Smith’s “Lay Me Down” with a voice even more beautiful than he is, Hobbs enraptured his audience and, at one point, his emotional delivery of the lines, “Can I lay by your side,” received an eager, “Yes!” from one of his (many) swooning fans. This was followed by a consensus of giggles and murmurs.

Trickanometry (TNT), the superstar hip-hop dance group at Emory, also no stranger to adoring groupies, killed it with a Grease- themed performance. The boys dressed like greasers with tight jeans, white tee-shirts and slicked back hair. The performance began with my personal favorite choreography by College junior Torrian Robertson. Simulating a car, coinciding with their theme, TNT exploded, adding to the upbeat energy.

Later on, actual goose bumps prickled on my arms as College sophomore Tejal Pandharpurkar showed off her incredible vocal range singing “Sun Raha Hai,” a traditional Indian song. This definitely came in as one of my favorite performances of the night, and though this is not uncommon for me, I teared up, captivated by her enthralling performance.

The performances included several styles and genres of dance, music and poetry. The acts didn’t follow a clear order, beginning with a hip-hop dance battle and transitioning into an acoustic cover of an alternative song. These stark contrasts showcased the incredible diversity and range of talents at Emory. At the end of the programmed events, the final performers, rappers boregard, starpav and, sid worthy, continued performing, saying that the event was over but they were going to stay and if people wanted to get up and dance and stay with them, they were welcome to do so. As the executive board cleaned up and the majority of the audience slowly shuffled out, boregard, starpav, sid worthy continued performing as though the room were still full. The 40 or so people who stayed didn’t seem to notice that the rest of the room was becoming bare around them. This is the spirit of the Emory Underground Art Show.

These events are put on to celebrate and shine a light on the true essence of students that lay behind their majors. It is a credit to the passion and dedication of students that events like Emory Arts Underground Showcase come to exist and grow.