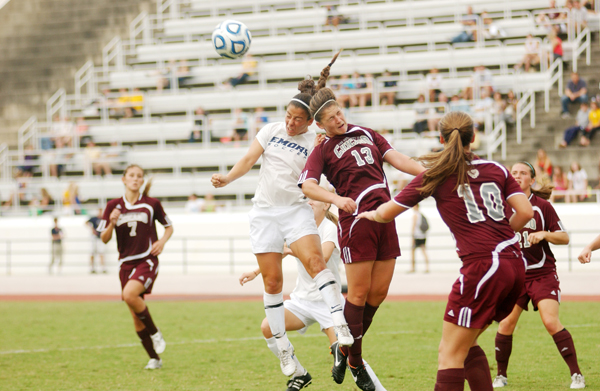 The fall 2012 season was a historic one for the Emory women’s soccer team. Anchored by their defense, the Eagles were the NCAA Division III runner-up, logging an impressive 15-2-7 overall record. The team finished third in the University Athletic Association (UAA) conference standings with a 3-1-3 record.

Emory had a long run in the NCAA tournament, which ended in the finals. The Eagles breezed through the first two rounds of the tournament with 2-0 wins against Depauw University (Ind.) and No.7-ranked Centre College (Ky.). In the third, “Sweet 16” round, Emory slipped past Loras College (Iowa.) by a score of 2-1, in a match played in Pittsburg, Penn.

In the elite eight, the Eagles saw a familiar foe. The team defeated the No. 17-ranked, Carnegie Mellon University Tartans. The game initially ended in a 0-0 tie before going into a shootout, which the Eagles won by an 11-10 score. The Tartans also play in the UAA.

Emory’s final win of the season came in the NCAA semifinals match against Wheaton College (Ill.). The Eagles breezed to a 2-0 victory off of goals from sophomore forward Emily Feldman and junior defender Lauren Gorodetsky. The match was played in San Antonio, Texas.

In the NCAA-title match, the Eagles fell behind by a goal early to No.1-ranked Messiah College (Penn.). Emory was never able to answer back. The team went on to lose by a final score of 1-0.

Emory’s historic season did not go unnoticed as the Eagles’ players and coaches were showered with numerous postseason accolades. Head coach Sue Patberg was awarded the NCAA Division III Coach of the Year award by D3Soccer.com. Patberg received the award based on the strength of the team’s success.

On the players side, Gorodetsky led all award-getters. During the season, the UAA compiled a list of the top 25 UAA players of all time in its UAA 25-Year Anniversary Team. Gorodetsky was the only active UAA player on the list.

Based on her success in the tournament, Gorodetsky received the most Outstanding Defensive Player of the NCAA Championships award from D3Soccer.com.

The accolades kept coming for Gorodetsky in the postseason. She was named the Defender of the Year by D3Soccer.com at the close of the season.

The junior also found herself on the D3Soccer.com and National Soccer Coaches Association of America (NSCAA) All-America First Teams.

It did not stop there for Gorodetsky. Gorodetsky was also named the UAA co-MVP, an honor she shared with Anna Zambricki of Washington University in St. Louis.

This is her second consecutive season winning the award. Gorodetsky was also named to the UAA first team.

“This year I really set higher goals for myself,” Gorodetsky said. “As a junior, I had to find new ways to push myself to be better for my team and never stopped trying to improve.”

Gorodetsky was not the only Eagle to win postseason accolades. For their NCAA tournament success, junior outside back Lauren Drosick and sophomore outside back/midfielder Kaelyn Lucas were each named to the all-tournament team.

Kellu Costopoulos was named to the NSCAA all-tournament team along with Gorodetsky. Veronica Romero was named to the third team. Romero also joined Gorodetsky on the first team all-UAA, while Costopoulos, Feldman, and junior midfielder Greta Jochmann were all named to the second team. Lauren Drosick and senior goalkeeper Kaele Leonard were both honorable mentions.

The Eagles will look to build on their success next season. The Eagles will add five new freshman to replace the losses of seniors Lee Bachouros, Merrill Bachouros, Katy Kruse, Ashley Kaiser, Erica Stein and Kaele Leonard.

“The graduating seniors left a legacy of perseverance,” Gorodetsky said. “From their freshmen to senior years, they went from the worst to the best seasons in program history. From not qualifying to the NCAA tournament to a national runner-up finish. Our seniors showed us how great things can come from rising above.”