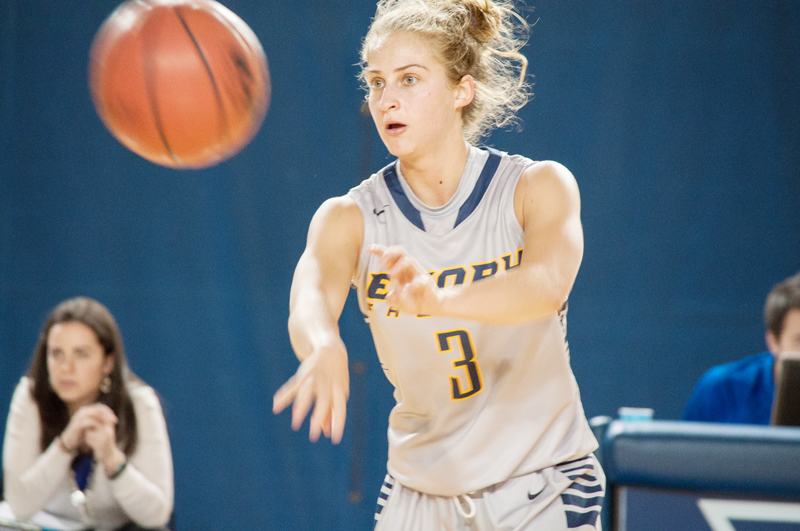 This past week, the women’s basketball team hosted New York University and Brandeis University (N.Y.) in two critical University Athletic Association (UAA) games. The Eagles fell in both games, losing to NYU 82-73 and to Brandeis 75-72.

The Eagles did not start well against NYU, trailing 36-28 at half. Emory struggled to make their shots early, only converting 35 percent of their shots and one of their eight three point attempts.

Conversely, Emory only got to the line five times, converting three. Also, while Emory won the rebounding battle 20-16 in the first half, they uncharacteristically failed to dominate the turnover margin in the first half, forcing 13 turnovers but turning the ball over 13 times themselves.

In the second half, Emory cut down New York University’s lead. In fact, Emory led by as much as five points and trailed 76-73 with one minute and 58 seconds to go. However, Emory could not make the key shots in the final minute.

While Emory lost by nine points, the score does not indicate how close the game was. NYU made four late free throws from intentional fouls as Emory attempted to extend the game. Emory cut down their turnovers substantially from 13 to six and forced New York to turn the ball over 12 times. However, Emory lost the rebounding battle and let New York get to the free throw line an astonishing 27 times in the second half. This proved to be the biggest difference in the game.

Against Brandeis, the game was close throughout, as the Eagles led 40-38 at half. While Emory did not shoot the ball well throughout the game, they took care of the basketball extremely well, turning the ball over only three times in the first half and nine times for the game.

Emory’s inability to make their shots and get to the free throw line proved to be the difference in the game. They got to the line only seven times during the entire game versus 20 for Brandeis. Emory did well on the boards, winning the rebounding battle overall 46 to 44, including 24 offensive rebounds, which kept Emory in the game.

In the second half, the teams were evenly matched. Emory trailed 73-72 with one minute and 43 seconds to go. They had one final shot when Brandeis was up three with four seconds to go, but senior guard Savannah Morgan missed a three point shot to tie the game. Brandeis won the game 75-72.

After their 14-0 start, Emory’s struggles have brought them from a legitimate NCAA Division III title contender to a team that is on the bubble to participate in the tournament. While the UAA has been tougher than it has been in recent years, Emory has lost many winnable games in the closing moments.

Coming up, they have their final game of the regular season against the University of Rochester (N.Y.). If Emory is fortunate enough to make the tournament, they have a chance to advance far beyond expectations. Their 14-0 start was not a fluke and while they have struggled mightily in their last 10 games, the team is deep and has tournament experience. However, because of their unfortunate losses in conference play, their postseason hopes remain up in the air.