The Emory University’s Department of Title IX hosted a conversation with Jennifer Hirsch, a professor of sociomedical sciences at Columbia University (N.Y.), and Shamus Khan, a professor of sociology at Columbia, about their recent book “Sexual Citizens: A Landmark Study of Sex, Power and Assault on Campus” on April 21. The book explores the role of sex on college campuses and argues that sexual assault should be a public health issue.

“So much of the conversation about campus sexual assault is really focused on scaring people,” Hirsch said during the discussion. “We take an approach that’s really grounded in empathy and hope. We see a lot that we could do to build a world in which there’s less sexual violence.”

Working within the Sexual Health Initiative to Foster Transformation, a research project about sexual health and sexual violence at Columbia, Hirsch and Khan led over 150 student interviews and trained researchers to conduct hundreds of hours of student observations at Columbia and Barnard College (N.Y.). 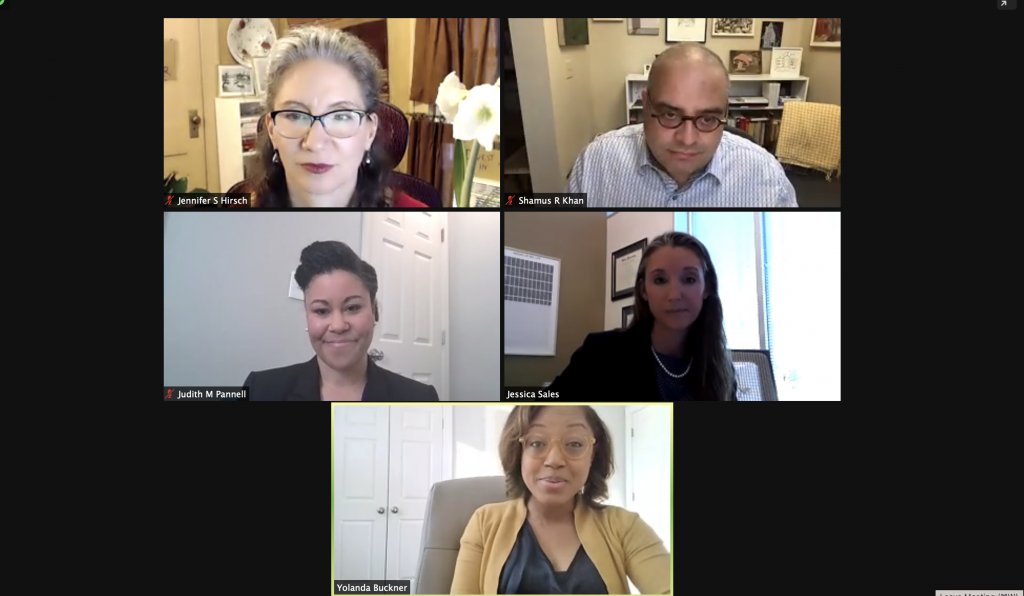 While conducting their research, the prevailing strategy for combating sexual violence focused heavily on assissting sexual assault victims. However, the harrowing accounts of sexual assault and the data Hirsch and Khan collected indicated inadequacies with that approach, so they suggested refocusing on sexual assault prevention.

“Most of the conversation was about how to improve adjudication,” Hirsch said. “We wanted to map out the social roots of sexual assault and take a public health approach, looking at how sexual assault is designed into campuses.”

Khan advocated for taking the “clean water approach” to solving sexual assault issues in an April 9 interview with the Wheel. This approach requires purifying the source of the “pollutants” rather than focusing on individual instances of sexual assault.

“We can think about sexual assault as being because there are broken people,” Khan said. “But we can also think about it as being a product of broken systems or contexts. Broken people are hard to fix, broken contexts are easier to transform.”

Viewing sex as a taboo subject is a pevasive, harmful attitude consistent across different communities, Khan explained. He blamed older generations for avoiding difficult conversations with their children, instead prioritizing career-related success.

As a result, Hirsch and Khan said college students often arrive at college without fully formed “sexual projects,” a term they use to describe “what sex is for.” Hirsch said she was surprised by how often the lack of a common language about sex caused both victims and assaulters to leave an intimate situation without realizing an assault had accurred.

“[It] was very striking … just how many students described assault as ‘having sex,’” Hirsch said.

This uncertainty can also lead to people miscommunicating their intentions or blatantly ignoring others’ desires, a potent combination when examined in the context of power dynamics, Khan explained.

“Every single Black woman we spoke to told us a story of unwanted sexualized touching,” Khan said. “That is grounded in racism and the sort of societally-built view that undermines Black autonomy and Black women’s autonomy over their own bodies.”

Hirsch and Khan cited Greek life as a prominent example of the abuse of power on college campuses. Khan explained that the party scene is concentrated in fraternity houses, predominately occupied by white men, which is an open secret that only exacerbates sexual assault.

“The idea here is not that white men are bad, it’s that we have created institutional contexts that further augment their power, and that doing so comes with a bunch of risks and a bunch of problems,” Khan said. “[Ask] how do these policies, procedures, rules and the usage of this space increase versus decrease already existing inequalities.”

However, Khan argues that the onus of forming students’ sexual citizenship — the “right to sexual self-determination” and the “obligation to recognize the equivalent rights in others” — lies with childhood communities, as there are widespread inadequacies in the U.S. school system’s sexual education curriculum.

“Women who had comprehensive sex [education] that included practicing refusal skills … were half as likely to be raped in college,” Khan said.

Women not in college are more likely to be sexually assaulted, suggesting that sexual assault has roots outside of a college environment, Khan explained. Thus, he saideradicating sexual violence begins with changing the information children receive about sex and how that information is presented.

“If we think seriously about how high school and pre-high school sex [education] can massively reduce the experiences of assault, we wouldn’t just solve the college problem, we would address the societal problem,” Khan said. “Our failure to do that is in some ways a willingness to accept sexual assault as normal. From our perspective, that’s not acceptable.”

Recently, President Joe Biden instructed Secretary of Education Miguel Cardona to review the Title IX stipulations established under former Secretary of Education Betsy DeVos that increased the rights of those accused of sexual assault on college campuses. While Khan said Biden’s initiative is crucial, he suggested that the Biden administration should work toward a “broader commitment to community transformation” by implementing preventative measures rather than dealing with the aftermath of sexual assault.

“Adjudication operates a little bit under the fantasy that if we just got punishment right, we could transform the behavior,” Khan said. “Getting adjudication right is important to people who’ve experienced harm and the people who have been accused of harming someone else.”