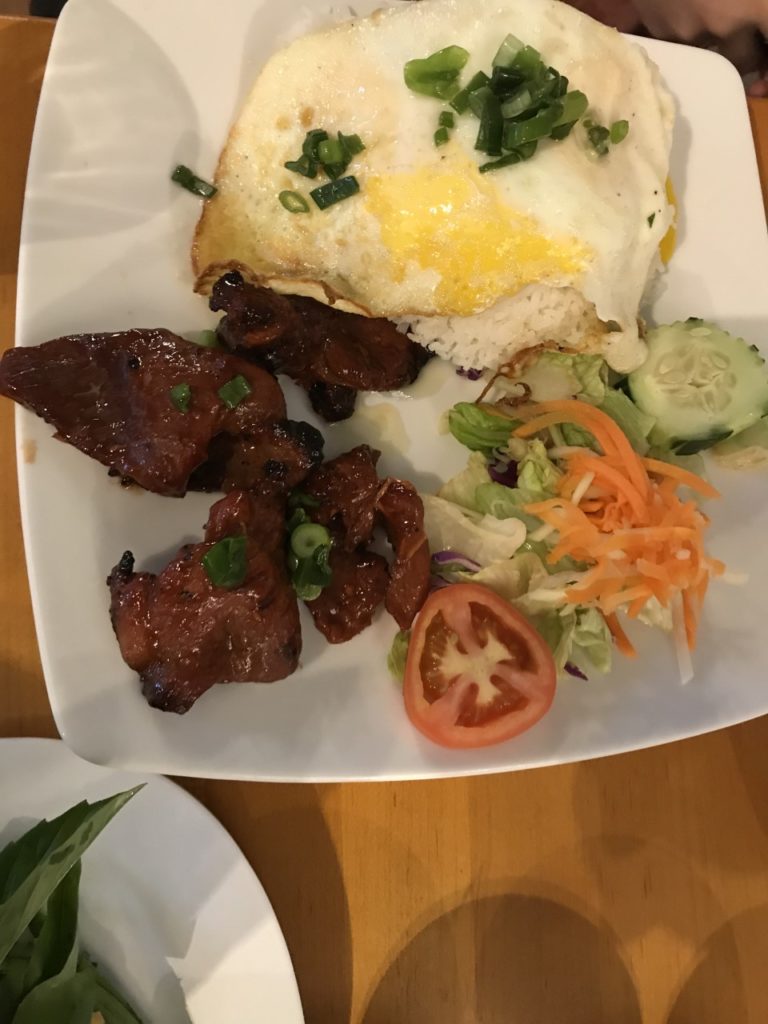 A taste of Vietnam is closer than you think, tucked away in a pedestrian-only side street, past a boring brick wall where several instagrammers are snapping photos.

Pho 24 is a Vietnamese sit-down chain restaurant that offers an array of authentic lunch and dinner options. The franchise just opened its sixth location at Atlantic Station, a 25-minute Uber ride from Emory’s main campus. The meal was overall disappointing and not up to par to its 3.9 star Google review rating.

Despite being typically picky eaters, my friends and I had an easy time picking entrees. The menu is almost four pages long, and is broken up by appetizers (Khai Vi), pho, fried rice (co’m chien), rice dishes (co’m), vermicelli (bun), Vietnamese sandwiches (banh mi) and smoothies and beverages.

The shrimp rolls, composed of shrimp, lettuce and bean sprouts wrapped in delicate white rice paper, were a mediocre start to the meal. For $4.25, I felt cheated when I saw the two small rolls with a minimal amount of seafood that came in the order. I also expected the rolls to be cold and crisp, and was disappointed when they arrived slightly warm. Although the components seemed fresh, the bean sprouts fell out of the roll upon my first bite, making it difficult to dip the roll in its accompanying peanut-plum sauce. Though the sauce was sweet and tasty, it didn’t make up for the lack of shrimp in the rolls.

Next came the coconut smoothie, which my friend likened to a thick and sugary bubble tea. It was far too sweet for my liking, but my friend enjoyed it. I recommend ordering the smoothie as a dessert, rather than a beverage to wash down your meal.

The entrees came about 15 minutes after our initial order. Though the service was fast, the wait staff was not attentive. My friend ordered the pork chops, which arrived charred, dry and too tough to eat with the provided spoon and fork. On the bright side, the fried egg was cooked perfectly, with a slightly runny center, and the rice was sweet and smoky with just the right touch of salt.

My order, pho with chicken, fell short of my expectations. Despite ordering a small, I was pleasantly surprised when the waiter gave me a bowl larger than my head. However, it soon became apparent that the entire bowl consisted of a giant ball of rice noodles with only a few pieces of chicken scattered here and there. Upon my first bite, I was pleased with the umami broth that boasted flavors of chicken, onions and a subtle hint of pepper. However, the saltiness led me to follow each spoonful with a sip of ice water. I left a substantial amount of noodles in the bowl and felt guilty wasting the food after spending almost $13.

The shrimp fried rice was probably the tastiest of the entrees. The rice, cooked with soft peas, sweet carrots, caramelized onions, shrimp and cilantro, boasted an addictive flavor. The portion didn’t last long on the plate. I only wish there had been more shrimp and maybe an acidic ingredient, such as lime juice, to cut through the fat of the dish.

The overall dining experience suffered from mediocre food but delivered on the warm and friendly atmosphere. From a young girl playing with strands of rice noodles to the college-aged couple laughing over their bowls of pho, every customer appeared happy. A window to the kitchen occasionally flared with flames from the stove, lending excitement to an otherwise calm dining room. Although the interior flaunted modern wooden booths and stand-alone tables, aspects of traditional Vietnamese culture were just as palpable. A mural featuring a small Vietnamese farming community set the tone for an authentic meal.

By 7 p.m., customers occupied almost every table in the restaurant. Emory students fit Pho 24’s typical clientele profile, although you should be willing to drop at least $16 to get both an entree and appetizer.

If you want to stretch your wallet for some tastier fare, try one of the many other restaurants at Atlantic Station. But if you want some quick, satisfactory sustenance, Pho 24 is the way to go.