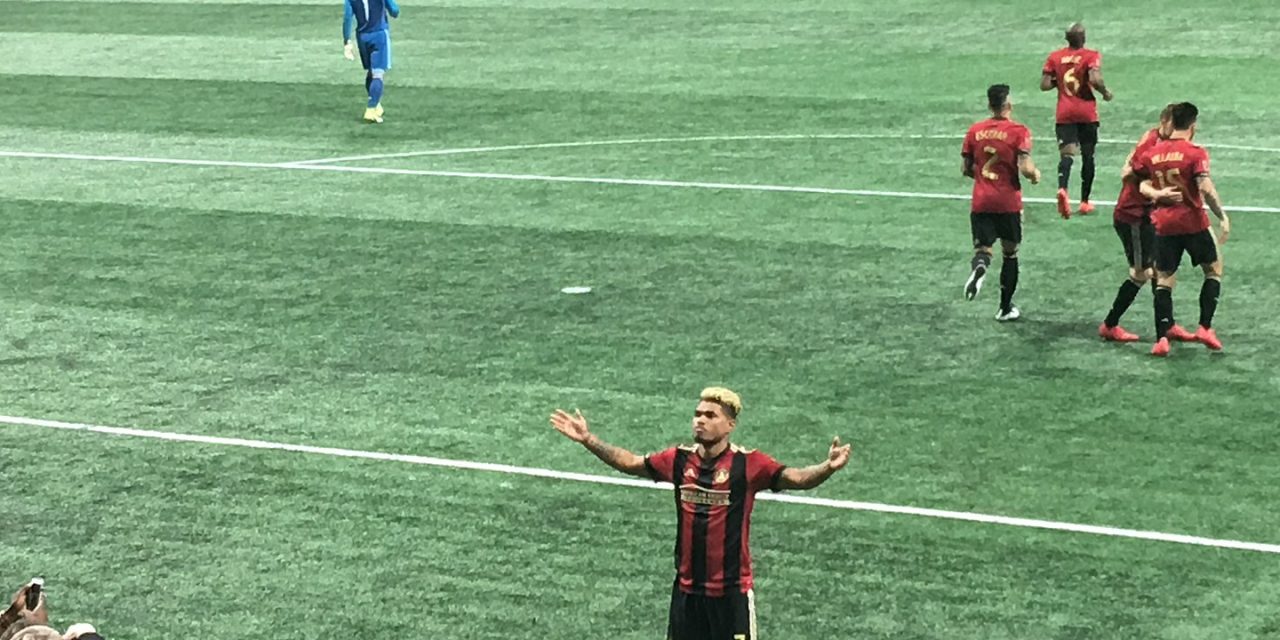 In arguably one of their best games of the season, Atlanta United FC blanked D.C. United on Oct. 3, outscoring them 4-0. The game had a plethora of unforgettable moments: from an MLS goal of the week scored by Atlanta United right midfielder Brooks Lennon, to a picturesque team goal and even bizarre on-field drama. D.C. center back Frédéric Brillant received a late red card, but that wasn’t the most controversial moment of the game. Three minutes into the second half, the referee stopped the match and pulled out an iPhone to confirm that D.C. had made an illegal substitution: D.C. central midfielder Russell Canouse was subbed in at halftime, but he was not officially registered in the match day roster.

Aside from the chaos and even after a dominant win, questions still linger about Atlanta’s postseason prospects and how the team should rebuild this offseason. Only nine regular season games remain, but it is unclear what the future holds for the team. One flawless performance against D.C. United doesn’t change the fact that Atlanta is struggling to make the playoffs despite having won the MLS Cup only two years ago.

First, it remains to be seen whether Atlanta can consistently replicate the standard of performance set on Saturday, and fans should prepare to curtail lofty expectations they had after the match. This season, D.C. United is easily one of the worst teams in MLS and six of Atlanta’s remaining nine games are against teams in the top half of the table. The next two home games against the Orlando City SC and the New York Red Bulls will be better indicators as to whether Atlanta is finally gelling or if the D.C. win should be taken with an enormous grain of salt.

What has become abundantly clear is that Atlanta cannot waste a designated player (DP) slot on left winger Ezequiel Barco. Currently, Barco is missing from action, allegedly due to a minor injury. Given his frequent injury record in the 2019 season, it’s possible that Barco is actually injured. But oddly, his name wasn’t included in Atlanta’s injury report before the D.C. United game.

There was brief speculation that either Barco or the team was working on a transfer away from Atlanta before the European transfer deadline on Oct. 5. This conjecture wasn’t completely unfounded, considering other players have feigned injuries to pressure their teams into selling. At the very least, the timing of Barco’s absence looked questionable.

Interim head coach Stephen Glass dispelled these rumors, confirming that Barco will stay at the club for the rest of the year. However, it is still unclear whether this will extend beyond this season with reports of European interest.

Regardless of whether Barco is actually injured or wants to jump ship, his appearance record over the last two years shows that he isn’t reliable enough to play a full season. Barco played in just 15 out of 34 league games last year and only five out of 15 this year. Barco is undoubtedly talented, but what is the point of having him as your DP if he doesn’t play?

Even when Barco becomes available, he will find it difficult to walk straight back into the starting lineup. Left winger Jon Gallagher has provided the spark for Atlanta’s offense since stepping in for Barco, scoring three goals in the last four games. Atlanta fans have seen a glimpse of life without Barco and it doesn’t look bad, especially with the blossoming partnership between wide players Gallagher and Lennon.

Atlanta would be wise to sell Barco while his stock is still reminiscently tied to the 2018 MLS Cup win. This would free up a DP spot and provide extra cash to add reinforcements in the middle of the pitch. Jeff Larentowicz’s sturdy presence in central midfield has been a huge boost, but at 37, he’s not a long-term solution. Atlanta, too, has yet to properly replace central midfielder Darlington Nagbe after trading him to Columbus Crew SC for allocation money.

Aside from their roster, another big question remains: how should Atlanta define success this season? Despite the team’s young age, Atlanta fans have grown accustomed to winning trophies after winning the MLS cup in 2018 and the U.S. Open Cup in 2019. With two DPs out injured and an interim head coach, winning a trophy for a third consecutive year seems like a tall order.

But Atlanta may not be as far off from assembling a championship team as its 5-3-8 record suggests. Looking at the Premier League as an example, Liverpool FC transformed into a title-winning team after only two signings — goalkeeper Alisson Becker and center back Virgil van Dijk. Atlanta’s new DP signing, attacking midfielder Marcelino Moreno, and star forward Josef Martínez’s return from an ACL injury could bridge the gap to the top next season.

Atlanta can and should build the foundation for a future championship team. A major component of this process involves the development of young players like Lennon, Gallagher and left back George Bello. Atlanta should aim for the playoffs not with the expectation to win, but with hopes that it will build experience and instill confidence in these young players. Playing in the postseason tournament also provides extra game time for Moreno to integrate into the team. However Atlanta ends the 2020 season, they will undoubtedly be entertaining to follow. 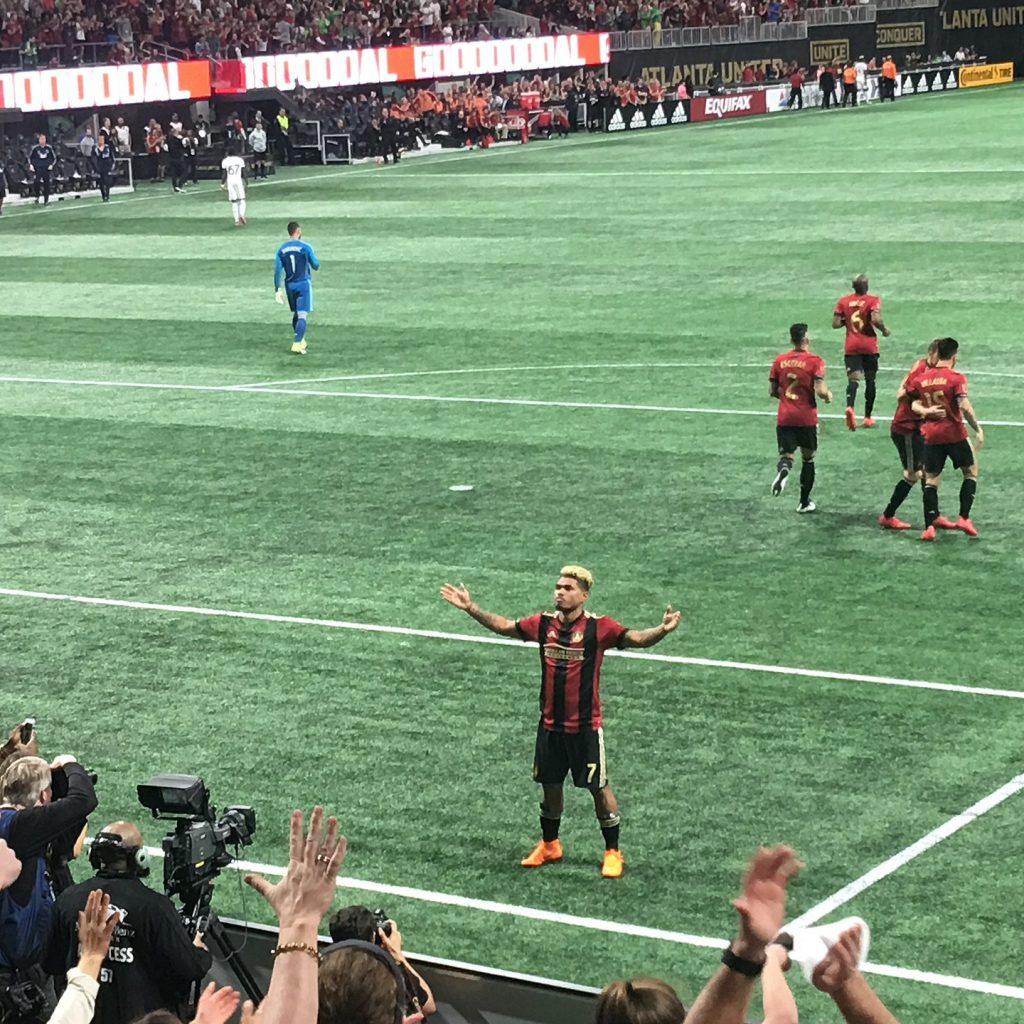 Atlanta United forward Josef Martinez dominantly faces the crowd during a match in 2018. Atlanta’s fate this postseason will be shaped by their remaining regular season matches./Courtesy of Wikimedia Commons

Andy Park (21B) is from Port Washington, New York, majoring in business administration. Outside of the Wheel, he is involved with the Goizueta Energy and Environment Group. He enjoys watching soccer, reading thriller novels and watching movies.