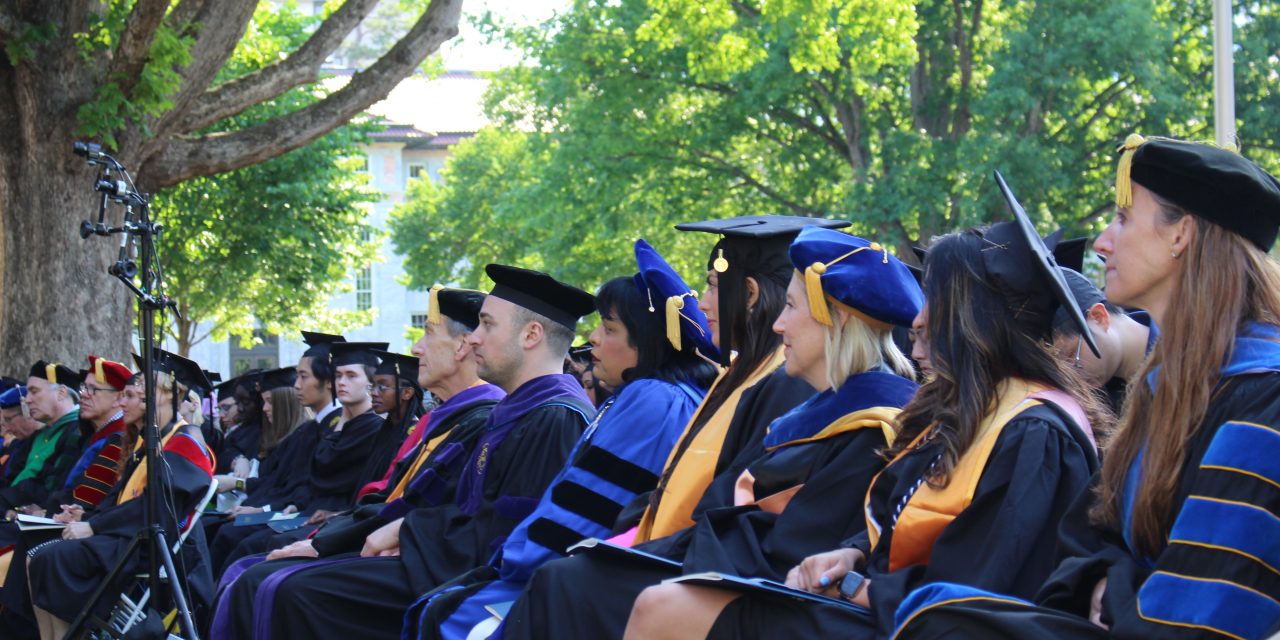 Following Kelly’s address, students walked from the Emory Student Center (ESC) to Asbury Circle with candles in hand. Emory alumni, faculty, staff and trustees are encouraged to line the path and cheer on the graduates. The ceremony symbolizes undergraduates crossing over from student to alumni status. Photos by Jada Chambers

The Class of 2022 then entered McDonough Field for a night of music, food, alcohol and celebration. Graduates also participated in a final Coke Toast, a tradition that each student participates in when they initially matriculate into Emory. Photos by Jada Chambers

Graduates of varying faiths gathered to celebrate their past four years at Emory University during the Multifaith Baccalaureate Ceremony in Cannon Chapel on May 6. University President Gregory Fenves attended to congratulate the seniors and give them commemorative magnets, which included the Muscogee Tribe symbol. Graduates also shared speeches, music and mediations with one another to celebrate their different religions. Photos by Matthew Chupack and Madi Olivier

It sprinkled as legacy graduates and their families arrived at the Patterson Green near the Goizueta Business School early in the morning to eat pastries, eggs, coffee and more before the Legacy Medallion Ceremony on May 7. Parents, grandparents and other relatives who had graduated from Emory caught up with their old classmates, reminiscing on when they were in the seniors’ place years earlier. Other families used the time to have a quiet moment with each other before a hectic graduation weekend. Photos by Madi Olivier

After breakfast, legacy graduates and their families filed into the Schwartz Center for Performing Arts, where Joe Kokolakis (89L) gave keynote remarks to welcome his daughter Paige Kokolakis (22C) and her fellow seniors into the community of Emory alumni. Family members who previously attended Emory then presented their legacies with a commemorative medallion, representing their family’s commitment to the University through generations. Graduates and their families ended the ceremony by singing the alma mater together. Photos by Madi Olivier

Black graduates celebrated their accomplishments with their families and friends during Modupe Dayo on May 7. Students received stoles at the event, which was an African-themed graduation ceremony in the ESC paying tribute to the graduates’ heritage and ancestors. Photos by Madi Olivier

Latinx graduates and their families gathered on McDonough Field for dinner before the CARAS reception on May 7. Latinx music played over the families’ voices as they ate food catered from The Freakin Incan, and graduates received commemorative mugs that said “Latinx at Emory” with pink and green tissue paper. Photos by Matthew Chupack and Madi Olivier

Everyone moved into the ESC for the CARAS ceremony, where about 85 graduates — the most in University history — walked across a stage and were presented with a graduation stole by a chosen family member or friend. Students and their chosen companions embraced on the stage, receiving cheers from the crowd. Several members of the Latinx community at Emory gave speeches and presented awards during the ceremony, which was hosted in both English and Spanish. Photos by Madi Olivier

Emory honored graduates who are low income or first-generation college students with a ceremony in the ESC on May 8. Family and friends took the stage with their students to present them with cords and graduation stoles to honor their hard work during their time at Emory. Photos by Jada Chambers

Asian Pacific Islander and Desi American students gathered in the ESC on May 8 to celebrate their achievements at Emory at the second annual APIDA Graduation Ceremony, marking the first time the event was held in person. Several members of Emory’s APIDA community spoke at the event before students were given graduation stoles by chosen friends and family. New traditions were established at the ceremony, such as the presentation of the first Dr. Jane Yang (98C) award, which was given to Yang herself in honor of her advocacy for APIDA students. Photos by Madi Olivier

After the ceremony, APIDA graduates walked to the ESC Plaza with their friends and family to eat dinner, which included spring rolls, finger sandwiches and steamed rice cakes filled with purple yam jam by Kamayan ATL. The Plaza was loud as graduates and their families talked with each other and posed for photos. Photos by Madi Olivier

Graduates and their families began filing onto the Quadrangle before 7 a.m. for the early-morning Commencement ceremony on May 9, which was held before the individual graduation ceremonies. By the time the ceremony began at 8:30 a.m, the thousands of white plastic chairs that were lined up on the grass were filled. Director, producer, actor and screenwriter Tyler Perry gave the keynote address, while Fenves and former Student Government Association President Rachel Ding (20Ox, 22B) also gave speeches, reflecting on the Class of 2022’s resilience during the pandemic. Photos by Sophia Ling