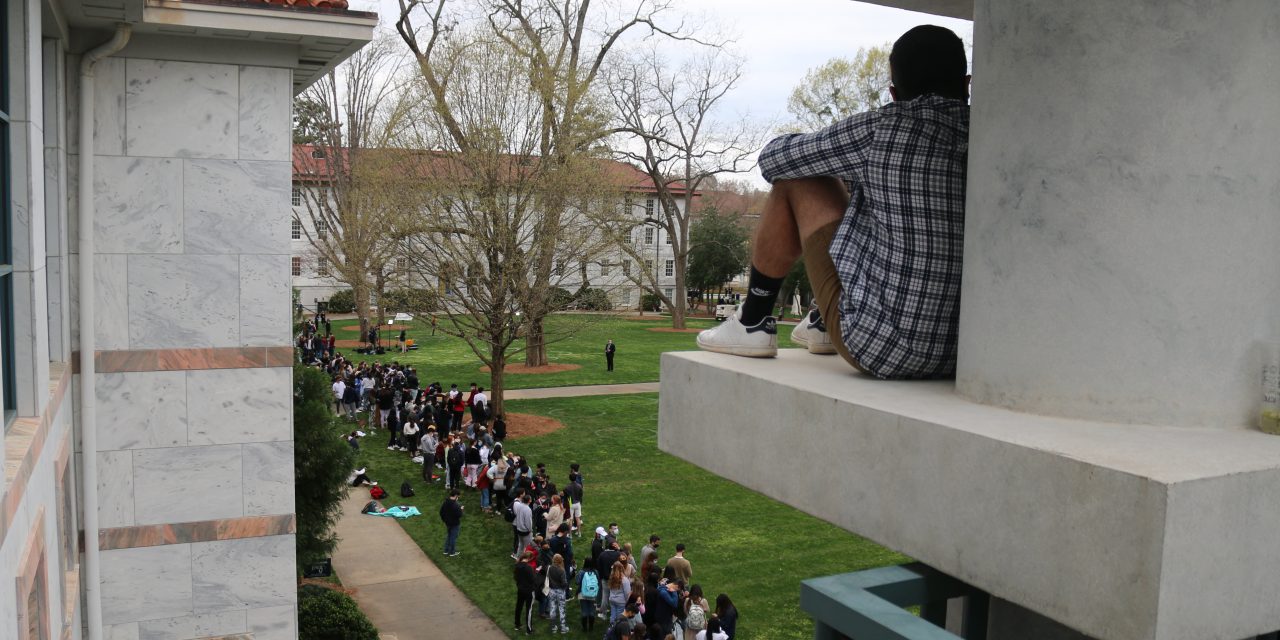 The day that President Joe Biden comes to visit, the quad is almost unrecognizable. Hridansh Saraogi (24C) is shocked; he’s never seen such a crowd on campus before.

Each time the door to Convocation Hall opens, a hushed silence falls over the chattering crowd. They peer eagerly over shoulders and poised phone cameras in anticipation before resuming their conversations, eyes still glued to the entrance.

The night before, news broke that Biden and Vice President Kamala Harris would visit campus following the Atlanta spa shootings on March 16 that killed eight people, six of whom were Asian American women. 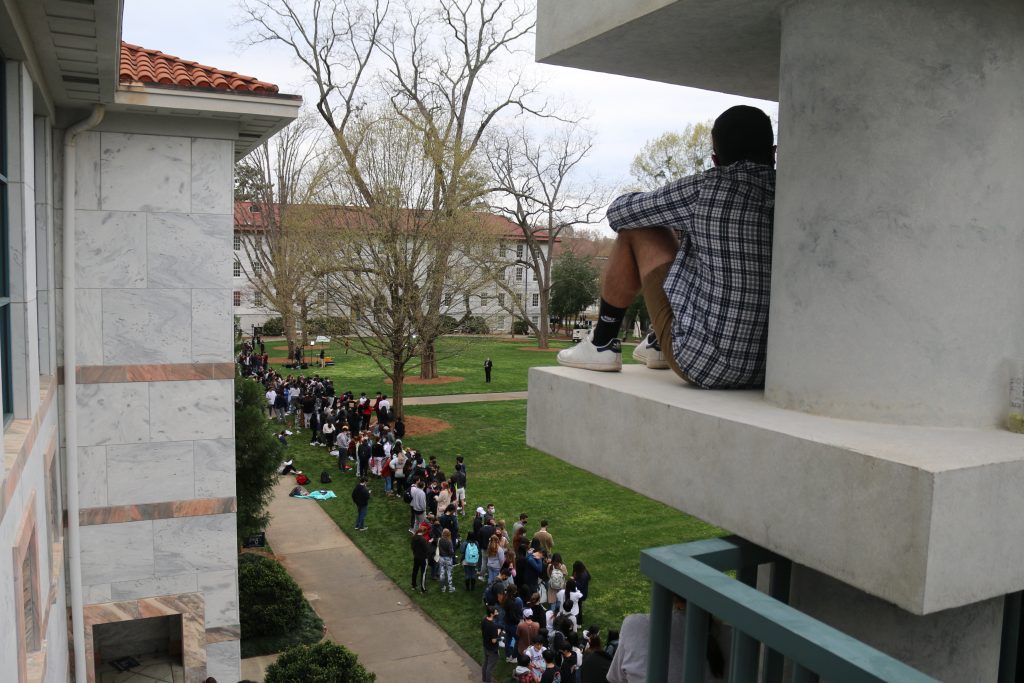 Students gathered on the quad outside of Convocation Hall, where President Joe Biden gave a speech on March 19 condemning the Atlanta spa shootings. (Isaiah Poritz)

Before delivering their speeches, the president and vice president visited the Center for Disease Control and Prevention and met with Georgia Asian American leaders at Emory University. The president was scheduled to visit Atlanta on March 19 to promote the American Rescue Plan, a $1.9 trillion COVID-19 relief bill, but he postponed a rally to address the shootings that happened only days before.

In his speech, which was live streamed from Convocation Hall, Biden condemned the violence against Asian Americans and called the conversation he had with Asian American leaders “heart wrenching.”

“Hate can have no safe harbor in America,” Biden said. “It’s on all of us, all of us together to make it stop.”

University President Gregory L. Fenves called Biden and Harris’ visit to Emory “an honor,” in a March 23 statement to the Wheel.

“In this moment of mourning and grief in Atlanta, we must speak out against hate while forging strong partnerships to make progress and build understanding,” Fenves wrote. 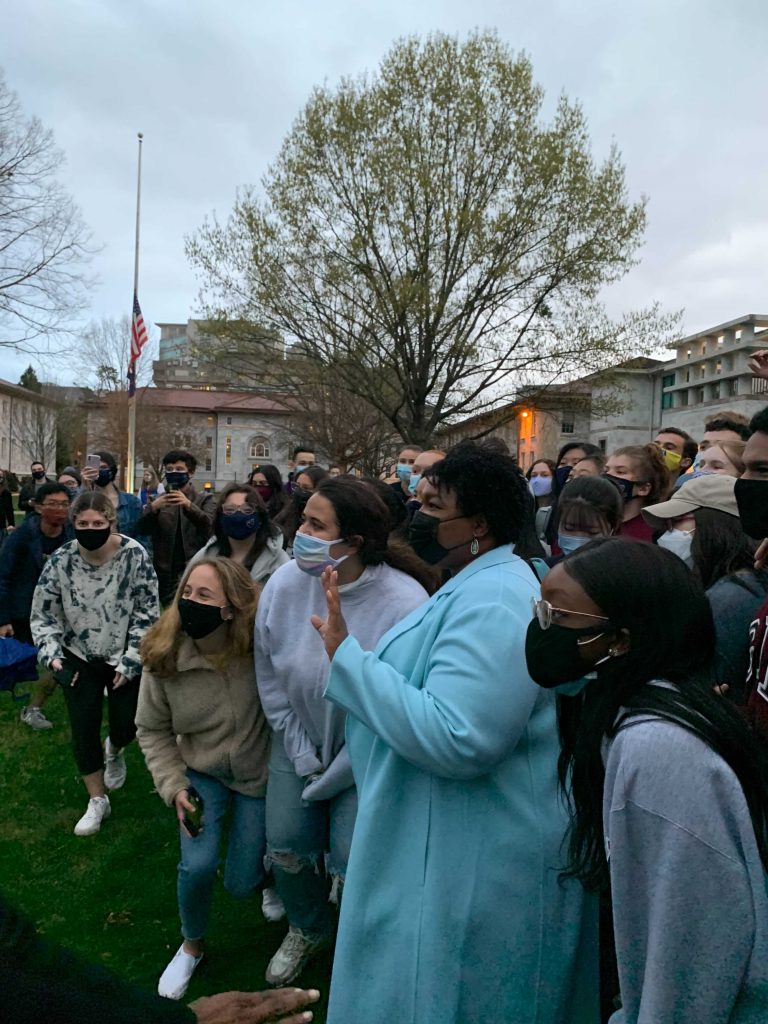 After hearing that Biden was planning to speak at the University at 4:40 p.m., students began gathering on the quad outside of Convocation Hall as early as noon.

Angel Hailemariam (24C) said she was “happy” to hear Biden was coming to campus, as it would allow for students to be “united in a time of mourning.” While she was hopeful that Biden might make an appearance in front of students, he never did.

Aditi Mishra (22Ox) was also disappointed that she did not see Biden after waiting for four and a half hours on the quad.

“I thought it would be amazing to see the President in person; it truly felt like a once in a lifetime opportunity,” Mishra said. “I did not expect much, but I thought that he would address us and perhaps have a short photo session.”

Eric Kovarsky (24C) had the opportunity to engage in conversation with Ossoff and take a group photo with Abrams, calling the experiences “incredible.” 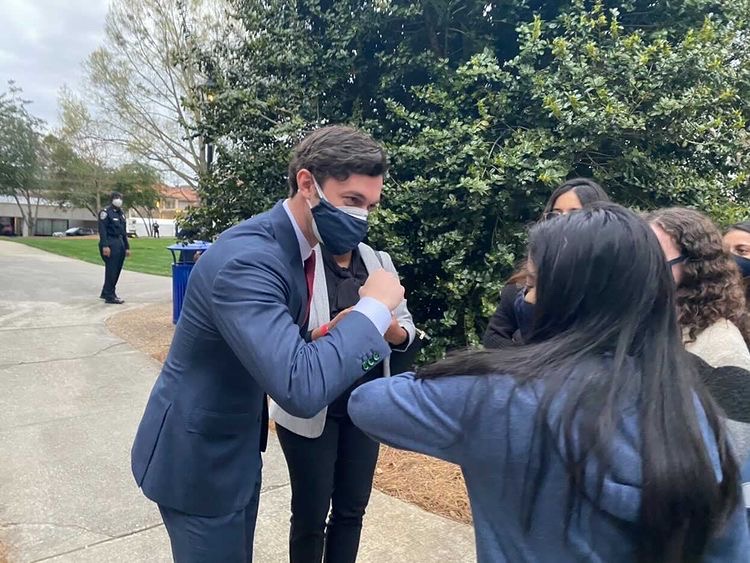 As a first year representative for Emory Young Dems, Kovarsky used his social media platforms to encourage his peers to vote during the November 2020 election. Kovarsky said the pair talked to students on the quad about the importance of voting rights.

President of Emory College Republicans Jasmine Jaffe (22C) described the experience as a positive one for the University’s community.

“It was an amazing experience to be able to watch the motorcade go down Clifton Road, and see so many politicians that I have only seen on TV,” Jaffe said. “Though I disagree with those individuals politically, it was very uplifting that the Emory community was able to experience the whole event together, when it has been very difficult for us to find unity recently.”

While the majority of students on the quad were masked, some expressed concern for the potential the large gathering had to spread COVID-19.

“I expected there to be a lot of people, but I also expected Emory’s staff to be trying to disperse the crowd,” said Sophie Anthony (24C). 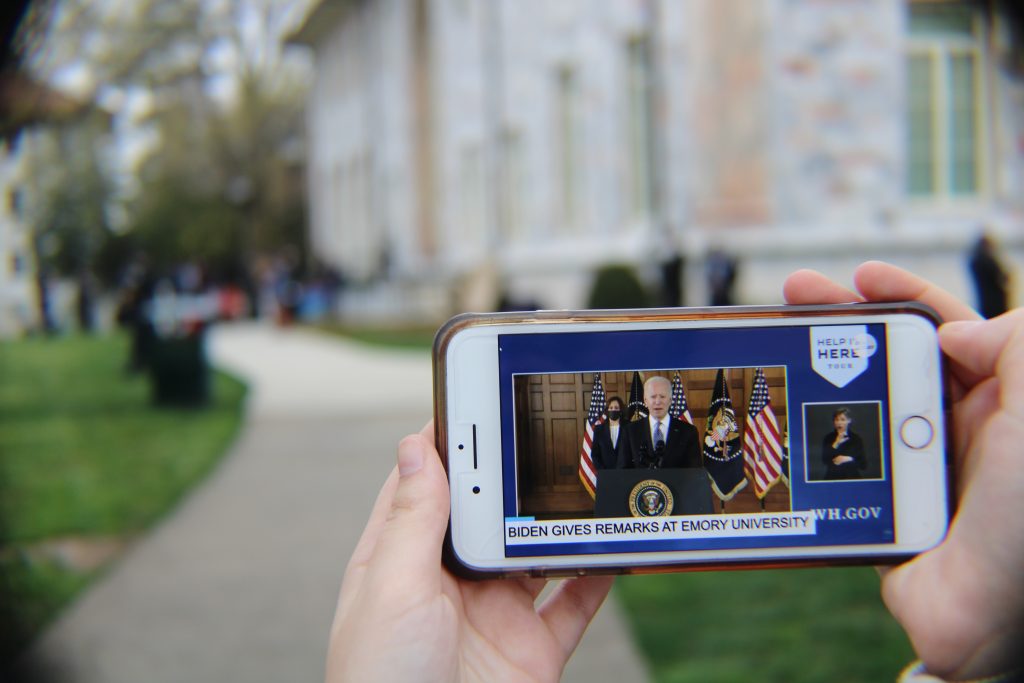 A student watches President Joe Biden speak live in Convocation from outside on the quad. (Matthew Nails)

Anthony added that when Ossoff and Warnock walked onto the quad, she avoided getting a picture with them because a crowd swarmed them and she wanted to limit her risk of contracting COVID-19.

At least two students protested at the event, holding self-made “Abolish ICE” signs. Jacob Chagoya (21C) said he saw the event as “an opportunity to make a statement” about Biden’s deportation plans and children still being in cages.

“For all of the talk that he’s said about no more kids in cages day one, he hasn’t really lived up to that, and I feel that people are overlooking it because he’s not Trump,” Chagoya said.

Chagoya added that as a Mexican American, he knows “people detained for being Mexican even though they’re citizens” and “people who live everyday in fear of deportation even though they grew up here.”

While Chagoya used the gathering to protest a social issue close to him, Anish Nashine (24C) saw Biden’s visit as an important way to unite the Emory community.

“It’s very meaningful … because it’s with a community that’s been very separated because of COVID,” Nashine said. “People coming together for this in solidarity with the Asian families as well, it’s a very cool thing to see.”

A shortened version of this story was published in the March 24 print edition.

Correction (3/26/2021 at 10 p.m.): A previous version of this story incorrectly stated that Eric Kovarsky (24C) engaged in conversation with both U.S. Sens. Jon Ossoff (D-Ga.) and Raphael Warnock (D-Ga.). Kovarsky only spoke with Ossoff.

Correction (3/26/2021 at 10:05 p.m.): A previous version of this story incorrectly stated that U.S. Sens. Jon Ossoff (D-Ga.) and Raphael Warnock (D-Ga.) spoke to members of Emory Young Democrats about voting rights. Ossoff and Warnock spoke to a general body of students on the quad, not just members of the Young Democrats club.