‘The Investigation’ is Blunt, Harrowing 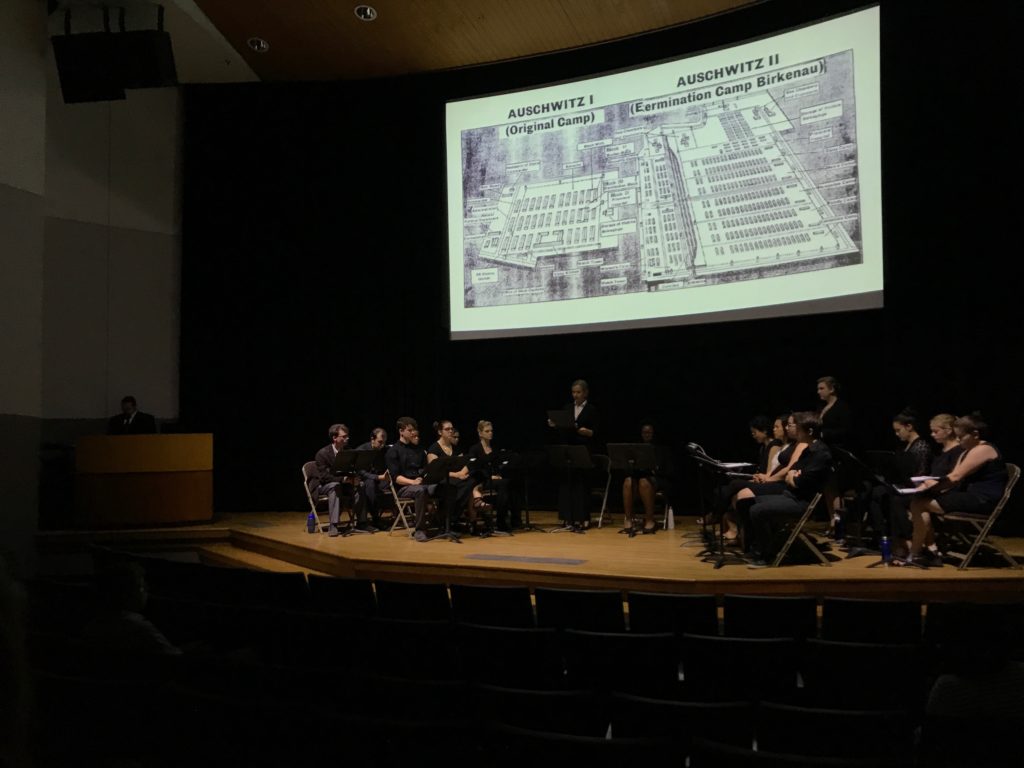 Friday nights usually find me out with friends or watching “Game of Thrones,” not listening to two and a half hours of Holocaust testimonies, yet, this past Friday, that’s exactly what I did.

Dooley’s Players performed a staged reading of Peter Weiss’s play “The Investigation” Sept. 21 to 23 in White Hall. Student director Josh Oberlander (19C) did his job effectively: He approached the play with respect and treated it seriously. The staged reading overall was powerful considering it was a student-acted and student-directed production — yet the play itself is problematic due to its lack of surface appeal.

Drawing in an audience is hard enough when the play is full of dancing Mormons or tragic lovers. “The Investigation,” which featured students sitting and reading the characters testimonials, had a small audience. I can’t attribute the lack of student interest simply to a lack of interest in the arts: Again, not many people will want to watch a very long play about Auschwitz on a Friday night.

The play is comprised of segments; each segment is a different court scene using the actual testimonies and scripts from the Frankfurt Auschwitz trials of 1963-1965. The staged reading was powerful because of the intensity of the subject matter, though not necessarily appealing to college students who often seek entertainment when they attend plays. The lessons audience members can take from the play are crucial and would be better communicated through a medium that attracts a larger audience. While hearing the actors read the characters’ testimonies is heart-wrenching, the play needs more mainstream appeal.

While I wish this had been a full production, as it would have required only one minimal set and few costumes, Oberlander’s arrangement of the characters was helpful in keeping all the characters straight. Each actor played several characters, and without Oberlander’s configuration — the Jews on stage left, the Nazis on stage right — the performance would have been more disorienting. As it was, actors constantly switching characters was confusing and disappointing. Each actor seemed to have only one voice and acting technique that they used for all characters they played. While it would have been helpful to have character names on the program instead of just a cast list, the configuration did not hinder the experience of the play nearly as much as it could have. The play fell into some inherent limitations of the staged reading experience.

That being said, several actors stood out and truly succeeded with their material. Ruth Puryear’s (21C) portrayal of multiple victims had an anxiety and multi-faceted depth that highlighted how real those testimonies were. She conveyed the dismay of the characters and captured the audience’s hearts during her emotional monologues. Elizabeth Johnson’s (19C) portrayal of a Nazis’ attorney was sharp and clean. Her voice rang with needed authority, and she gave the detestable character a real depth and drive. Abbey Middlebrook’s (20C) and Jessica McKeown’s (20C) performances as multiple characters portrayed a more hollow desperation that, while not as shocking, drained the audience of happiness. The actresses’ defeated voices and empty eyes were haunting and effective.

Jake Thompson (20C) stood out the most; his performance was gripping as he commanded the stage at every opportunity with dramatic reading. He mostly read as Boger, a Nazi leader in the camp. The charges brought against Boger are horrific, and Thompson truly portrayed Boger as a dynamic character rather than a surface-level monologue. He was the only actor who noticeably stayed in character during his scenes even when he was not speaking, which brought a cohesion to his scenes that others lacked.

While the play, for the most part, was well acted, it lacked the urgency demanded by the script. This content is some of the most draining and horrifying that the actors and audience will ever experience, demanding a certain level of emotion and fervor that the actors simply failed to provide. Rather than driving the scenes forward with desperation, the play was slow paced, which often brought the audience out of the scenes rather than pulling them along with the characters.

As director, Oberlander sought to tackle a behemoth of a project and was largely successful. The play was impactful, though that was largely helped by the heartbreaking dialogue. He was given a demanding script to work with and treated it with respect. Overall, the directing was strong, and there were standouts among the actors; however, the appeal was low, diminishing the imperative messages from the testimonies.

Correction (10/05/17): A previous version of this article stated that the trials which served as the historical basis for this play as the Nuremberg trials — the trials that served as inspiration were in fact the Frankfurt Auschwitz Trials of 1963-1965. The article has been changed to reflect this.