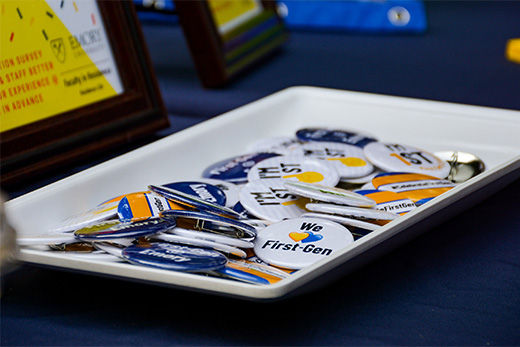 Emory University held its annual First-Gen Week from Nov. 8-12. The Office of Undergraduate Affairs (OUA) organized the week in partnership with the 2021-2022 First-Gen Forward cohort to provide resources to first-generation students.

The cohort is a collaboration of higher education institutions with the purpose of improving the experiences and outcomes of first-generation college students.

“Emory’s First-Gen Week is a wonderful collaboration across Emory, including both the Atlanta and Oxford campuses, to highlight and support the contributions of our First-Gen community,” Vice Provost for Undergraduate Affairs Pamela Scully wrote in a Nov. 12 email to the Wheel. “It provides us an opportunity to bring together undergraduate and graduate students, faculty and staff as we celebrate the power and promise of an Emory education.”

Emory uses the federal definition of “first generation” as outlined by the Higher Education Act of 1965: an individual both of whose parents did not complete a baccalaureate degree. However, in day-to-day work, a much broader definition is used — a student may simply self-identify as first generation, which may include parents who have limited experience with U.S. higher education.

According to Dean of Admission John F. Latting, enrollment numbers of first-generation students have increased by 37.9% since 2019.

First-generation student Jamaiica Hurston (22C) said although it was a busy time of the semester, she made time to go to the events and connect with faculty and staff who put the resources together.

“It was impactful to see how many first-generation students were there and that the community was so welcoming,” Hurston said. “I went to the first-gen dinner on Friday and also the first-gen game night on Thursday, and it was a really great way to connect in a stress-free environment and meet new people.”

Though the week was a celebration for Emory’s first-generation students, it also had an underlying purpose: to make resources visibly available to students. According to Associate Director for Undergraduate Affairs Marybeth Smith, partnering with the First-Gen Forward initiative was a major step in better understanding practices for supporting students.

As a First-Gen Forward Institution, Emory will join a community of experts and share evidence-based practices and resources, troubleshoot challenges, generate knowledge and continue to advance the success of first-generation students across the country.

“What we are doing as a part of this is a lot of professional development,” Smith said. “Sometimes, we can’t just throw money at issues. We have to think creatively and innovate to address problems with the institution, and we get to see from other schools how they’re doing that.”

Creating a robust First-Gen week was a part of this effort. Smith and OUA sought to make a visible, useful celebration to unite the first-generation community at Emory.

“We have so many first-gen students, faculty and staff, and they’re a really motivated group, but they’re not necessarily super connected,” Smith said. “It’s one thing to put out free food, but it’s another to think about what kind of resources we should make visible, and we can get undergrad students talking to first-gen grad students.”

First-generation student Maya Caron (23B) said that the disparity in socioeconomic classes in the school is evident.

“It’s been difficult, especially seeing the differences in social classes,” Caron said. “Seeing people with nice cars and never having worked a day in their lives is definitely a bit of a shock. But I know that we all belong here, and we all got accepted for a reason.”

According to Hurston, the presence of a “hidden curriculum,” which are things that universities expect people to already know about going in, was something she initially struggled with.

“There are times where I’ve had to give a little bit more effort and time to figure out what is going on in college,” Hurston said.

Caron mentioned that attending college was certainly a privilege for her. “A lot of people don’t have the opportunity to go to college because they have to work straight after high school to support their family,” she said.

“They did a call campaign where first-gen faculty worked together to call all of the first year first-gen students to welcome them to Emory,” Smith said. “And we found that the number of students they called doubled from last year.”

Among many resources available to first-generation students, there were a couple important communities that Smith highlighted. The 1915 Scholars program includes faculty, peer and alumni mentoring and specialized orientation programs. Emory First-Generation Low Income Partnership, the club for which Hurston serves as vice president, is a national nonprofit established to promote equal opportunity for first-generation and low-income students in institutions of higher learning.