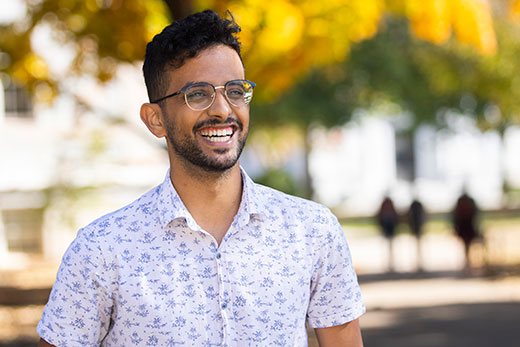 Ahmed Aljohani (22C) became the first Emory University student since 2017 to be awarded the Rhodes Scholarship on Nov. 20. He is one of only 21 Emory students to have secured the scholarship.

The award enables Aljohani to study abroad at the University of Oxford with tuition covered for two to three years in addition to annual stipends, two economy class flights and numerous research grants.

Established in 1903, the Rhodes Scholarship is the oldest and among the most prestigious international scholarships in the world, with only 102 scholarships awarded per year.

“I was really surprised to be selected as a Rhodes Scholar because I saw the other finalists and how good they were,” Aljohani said, describing his initial reactions to the award.

Aljohani is an international student from Saudi Arabia majoring in biology.

Throughout his undergraduate studies, Aljohani said that he has worked closest with Samuel C. Dobbs Professor of Biology Jaap De Roode. He met De Roode in the beginning of his undergraduate biology career when he enrolled in De Roode’s introductory biology class.

Aljohabi saidadded that De Roode helped him learn more about research and become more involved with the scientific community.

“What made him really stand out then was that he was very serious about his material and his learning,” De Roode said. “That also really transpired when he joined my lab to do research. He’s always been very thorough and serious about his work, and tries to operate at a very professional level.”

Since taking that course, Aljohani worked in the De Roode lab for two and a half years, studying immunity in monarch butterflies and how the monarch butterfly fights infection from its most common parasite. He published his findings in a research paper in spring 2021.

Aljohani’s research centered on circadian rhythms, the day-night rhythms most organisms have, and how that cycle affects a monarch butterfly’s immunity to infectious diseases, De Roode explained. Additionally, monarch butterflies are not conventionally used as a model organism, so Aljohani is exploring a new realm.

“We are hoping to use butterflies in order to study human immunity, because we believe that they are similar,” Aljohani said. “If we look into butterflies, we can maybe learn how to make new medicines from them.”

However, Aljohani’s post-graduation goals relate more to marine science and involve working toward a Ph.D. in biology and studying the Red Sea.

“It’s always something I’ve wanted to do, because I live close to the Red Sea,” Aljohani explained. “Right now, with global warming, most of the coral reefs are dying, except in the Red Sea. There are some parts that are not experiencing it, and I want to find out why.”

Outside of academics, Aljohani serves as co-president of the Muslim Students Association (MSA) and is captain of the Academic Fellows Program. He saidnoted that his experience with MSA impacted him greatly.

“When I was a freshman, the MSA held an open mic night, and they selected me as the host,” Aljohani said. “It was really scary because there were a lot of people in the room and I had to engage with them and introduce them to other people. That event helped me become more confident in myself, and it also opened a lot of doors for me.”

Additionally, he recalled participating in Emory’s Movie Fest, where his team was selected as a finalist. The five minute film required long hours recording video clips and writing a script, so seeing it screened in public meant a lot, Aljohani said.

“I’m not minoring in film, but I took film to help me learn how to communicate my ideas,” he said. “What we’re missing in science is the scientific community communicating with common people. I believe films, short videos and motion graphics are the way to help with that.”

Aljohani said he believes that people are much more willing to watch a one minute video rather than hearing a long lecture, particularly in science-related fields. While Aljohani’s fascination in film was purely out of interest, he noted that it helped him figure out how to present ideas visually.

Ultimately, his experiences at Emory influenced his career path, which Aljohani said he will bring with him as he undertakes his future endeavors at the University of Oxford.

“I honestly thought I didn’t have a chance, but the fact is that I was selected,” Aljohani said. “But I am one of them now, and I need to focus on that.”