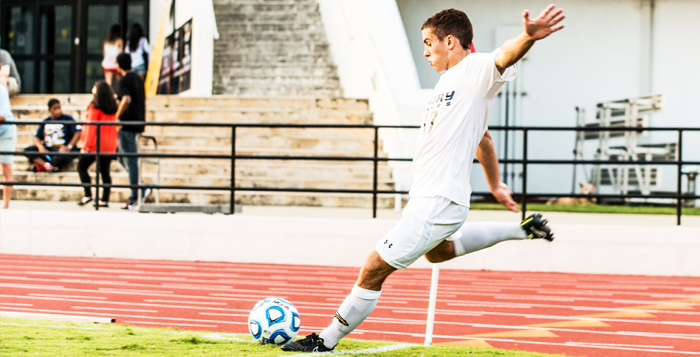 Photo by Steve Shan/Staff. Sophomore forward Jason Andrejchak reaches back before a powerful kick. He had one shot on goal against Covenant and an assist that led to junior forward Sebastian Hardington’s game-winning goal. The Eagles remain undefeated after five games, with a 4-0-1 record.

Wednesday, Sept. 10, the Eagles fought back and forth with the Covenant College (Ga.) Scots throughout a double-overtime game, emerging victorious and maintaining their undefeated 2014 season.

Junior forward Sebastian Hardington scored a late double overtime goal to secure a 2-1 victory in the 106th minute of play.

The goal was made possible by sophomore forward Jason Andrejchak’s cross to senior forward Dylan Price who then set Hardington up with an opportunity to score.

After a strong defensive start by both teams and a scoreless first half, an assist from Covenant senior midfielder Danny Knight set senior forward Snoopy Davidson up to score the first goal of the game, and his second goal of the season, in the 53rd minute of play.

Emory senior Jeffrey Cochran’s long throw-in allowed junior defenseman and co-captain Matt Sherr to head the ball forward to freshman midfielder Jason McCartney, who was able to put the ball away with a light tap sealing the 1-1 tie with only 25 minutes remaining on the clock.

The Eagles finished the match with two strong, but scoreless, offensive plays.

During the 84th minute of match play, Andrejchak was able to take a shot on goal that rebounded off of the crossbar.

In the opening plays of the second overtime, Price came out sharp with a shot on goal that Covenant junior goalkeeper Daniel Kubin was able to tap just outside of the goalpost.

After an undeniable test of the team’s grit, Emory Head Coach Sonny Travis was proud.

Covenant’s players were noticeably disappointed, but took the loss as a learning experience.

“It was a tough loss after a quality game but it was great to see the quality of Emory and get a feel of what a Top 25 team looks like.” Covenant senior midfielder and captain Hudson Brock said. “[Emory] capitalized on more chances than we did,”

Interestingly enough, one fan in attendance happened to be rooting for both teams. Thom Jacquet, Head Coach for 23 years at 2014 State Champion Greater Atlanta Christian School, coached a player from each team during their high school years. Covenant senior Danny Knight and Emory sophomore Max Gomas were teammates before playing on opposing teams.

Jacquet said he tries to go to at least one game that each of his now-college-level athletes play in, even once driving eight hours to Ohio State University.

“I was hoping for a draw. The shots were almost even and the teams were evenly contested.” he said. “Anyway, it was fun to watch both of my guys play.”

The Eagles return to action on Saturday, Sept. 13 to take on the Rhodes College (Tenn.) Lynx at Hendrix College’s (Ark.) Warrior Classic.