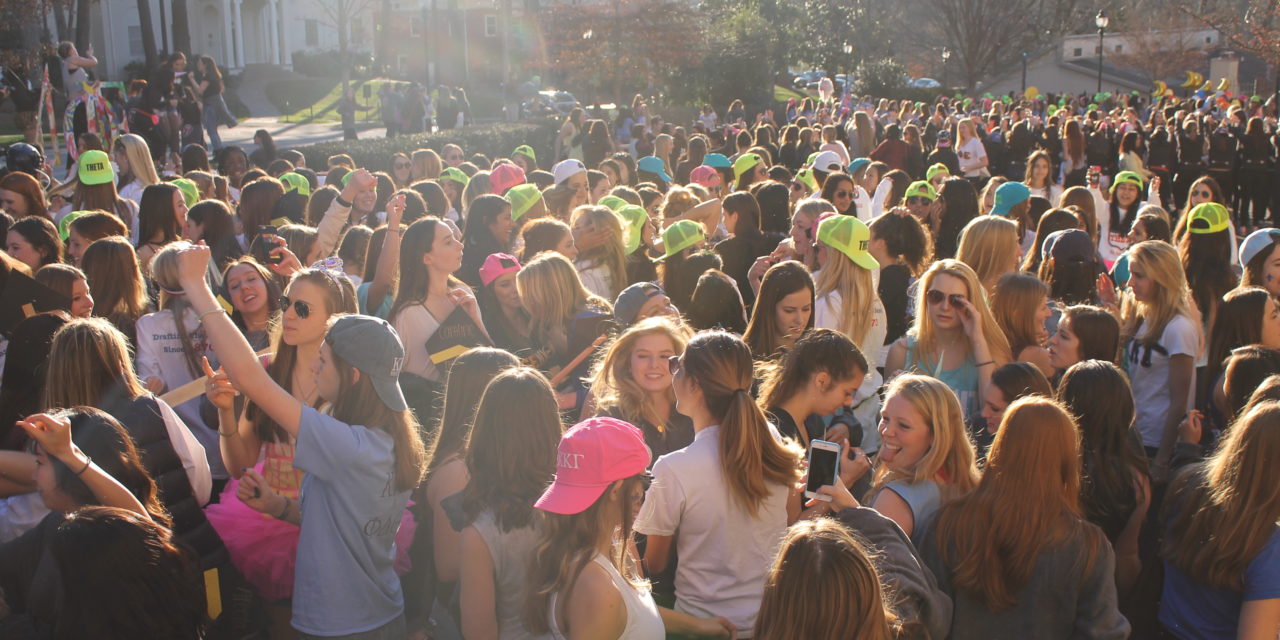 More than 500 women lined up in front of sorority houses and more than 350 men chatted outside fraternity houses for the 2015 Emory Panhellenic Council (EPC) Recruitment and Interfraternity Council (IFC) Formal Rush.

A bid is a formal invitation to join a sorority or fraternity.

He also wrote that 376 men participated in IFC rush this year with 269 of those men receiving bids, while last year, 332 men participated and 251 received bids. According to Walsh, 171 men accepted their bids this year.

However, Doctor affirmed that interest in participating in Greek Life remains high and, overall, he believes that Panhellenic Recruitment and IFC Formal Rush went very well this year.

“We continue to see a growing interest in fraternities and sororities as all four governing councils (EPC, IFC, MGC [Multicultural Greek Council] and NPHC [National Pan-Hellenic Council]) continue to experience growth,” he wrote and added, “I want to commend Cori Newnam, EPC VP of Recruitment and [Walsh], IFC Vice of Recruitment, for a job well done. [EPC] Recruitment 2015 and IFC Formal Rush both went very well this year.”

Doctor also noted that although IFC’s Formal Rush is over, Delta Tau Delta will be recruiting men to their chapter here through the spring.

“I am confident that our new members will all be wonderful assets to our Panhellenic community, and I am so excited for each and every one of them.” — Cori Newnam

Walsh wrote that he felt that Rush went “unbelievably” well this year.

He also mentioned some changes in Rush this year versus last year, one being that Spring Rush this year started in November. According to Walsh this was a new initiative introduced by IFC and is different from previous years where both parties would only get about four days to see if there was a fit for the next three and a half years.

“Potential new members were guided to every house in November,” Walsh wrote. “We believed that this would be beneficial to both the new potential members and the fraternities … Then, in the next couple weeks, each side could get to know each other more outside the context of rush rounds. This gave more time for fraternities to know the potential members, and vice versa.”

Of sorority recruitment, Vice President of EPC and College senior Cori Newnam wrote in an email to the Wheel that she is, “thrilled with the Emory Panhellenic Council’s Recruitment this year.”

“We placed 374 women into our seven organizations here at Emory. I am confident that our new members will all be wonderful assets to our Panhellenic community, and I am so excited for each and every one of them,” she wrote.

She also added that the process of recruitment would not have been possible without the support of members throughout the Emory community.

“I am so thankful for my Recruitment team, volunteers from the Division of Campus Life, Annie Herold, Ambra Yarbrough and my Panhellenic advisor, Arthur Doctor,” Newnam wrote.

“As with any process, we will work with council and chapter leaders to discuss any potential changes for the future,” he wrote.

Calling the Pi Chi program an integral part of the recruitment experience, incoming EPC President and College junior Olivia Czufin wrote in an email to the Wheel that EPC is taking serious steps to formalize and improve the program.

Pi Chis are sorority women who disaffiliate from their chapters during Recruitment and the semester before in order to mentor potential new members.

As an example, she wrote that this year EPC partnered with counselors from the Counseling and Psychological Services (CAPS) in order to better equip the Pi Chis in addressing various situations that could arise with the potential new members and that EPC sent several Pi Chis out to Oxford College in order to hold information sessions, meet the women and help facilitate relationships between the two campuses.

“The program is continuously evolving and improving, and will continue to do so next year,” Czufin wrote.