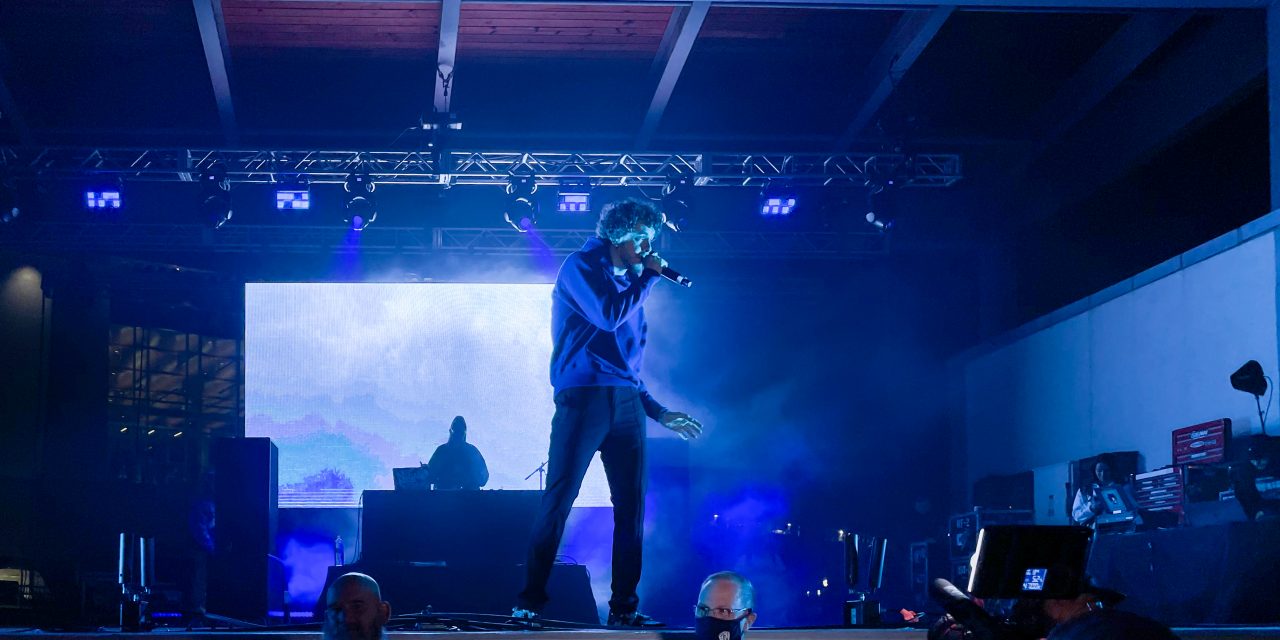 “Damn, I wish Fetty Wap could’ve been here,” rapper Jack Harlow said as he surveyed the crowd of over 3,800 students at the 2021 Emory University Homecoming concert.

Harlow’s words midway through his performance reflected many students’ sentiments about the annual event, dubbed Swoop’s Ball, held by the Student Programming Council (SPC) on Oct. 16 to kick off Homecoming Week. This year’s homecoming performances mark the first on-campus concert in two years. 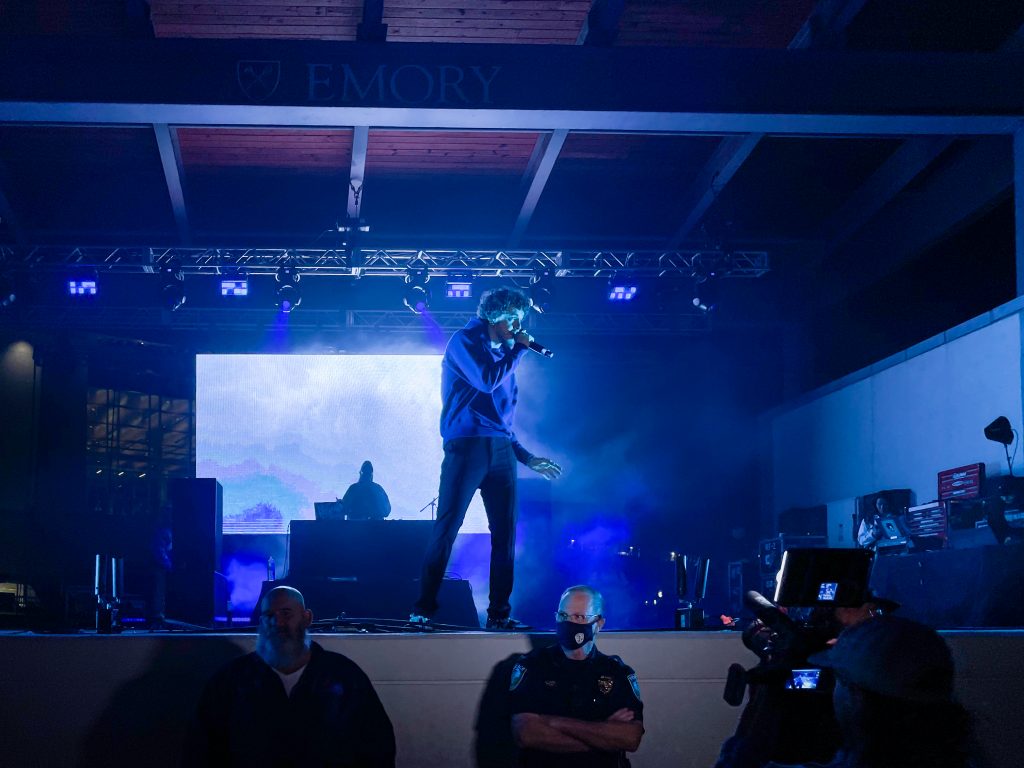 “They chose very well,” said Jessica Apple (23C). “I was actually very surprised that we were able to get [Jack Harlow] for the concert because he’s a pretty big person.”

Hours before the gates opened at McDonough Field, students stood in lines stretching past Asbury Circle to the Goizueta Business School. Anticipation transformed into agitation, however, as the minutes turned into hours, and Fetty Wap was nowhere to be seen.

SPC President Thomas Heagy (22B) announced at about 8:40 p.m., nearly three hours after attendees entered the field, that Fetty Wap missed his flight to Atlanta and would not be able to perform at the concert.

“It was kind of annoying that Fetty Wap did not show up, and I wish they had told us that he had missed his flight earlier,” Isabel Brandt (23Ox) said.

Because Fetty Wap violated his contractual obligation to perform, Heagy said SPC and the University will not compensate the Grammy nominated rapper.

Expecting a large crowd, SPC took extra steps to maximize McDonough Field’s capacity while adhering to fire code restrictions via measures such as adding additional exits to the field.

“With students returning to campus, SPC once again seeks first and foremost to create opportunities for students to build community and engage with their peers at in-person programs,” Heagy wrote in an email to the Wheel. “Despite our success last year in bringing the Emory community to students’ doorsteps, nothing beats seeing the Emory student body together like they were on Saturday!”

Some students said they were enthusiastic to relive the concert experience they missed out on in 2020, with many saying they had listened to the rappers’ music for years.

“No guests,” Mikahla Gay (21C) commented on a Oct. 14 SPC Instagram post. “What about a washed up alum that missed out on concerts because of COVID.”

“Good job finally getting decent homecoming artists and then excluding alumni & then @emoryuniversity still wants to call us for money,” Ashley Crooks-Allen (15C) wrote on the same SPC Instagram post.

The restriction to an undergraduate audience was the result of a split between the SGA and the Graduate Student Government Association in 2017 that separated student activity fees for the student bodies.

“Emory’s administrators made the decision this year to eliminate ticket sale options due to COVID-19 protocols,” Heagy wrote. “As a fiduciary to the undergraduate student body, SPC cannot allow graduate students, who voted for their split from SGA, to enjoy full access to the festivities at cheap ticket prices.”

By 6 p.m., students percolated into McDonough Field. But as students got closer to the entrance, the slow-moving line transformed into a chaotic swarm. Frenzied students shoved each other and cut through gaps in the fence to get ahead.

“Some people almost fell because of a step that no one could see because the entrance was a literal mob,” Areej Memon (23Ox) said. “It was very dangerous, and I didn’t like so many people being that close to me.”

Brandt expressed a similar sentiment, noting that it was “more chaotic” being in the line than it was at the actual concert.

But despite the anticipation getting onto the field, not everything went as planned.

After students made it through the horde and scanned their event passes, they arrived to SPC sporadically providing pizza and Insomnia Cookies.

Samuel Berliner-Sachs (22C), whose stage name is DJ Samwell, entertained the crowd until around 7:30 p.m., when Fetty Wap’s DJ stepped in. At 8 p.m., though Fetty Wap was supposed to perform, the DJ continued to play music.

“My brother Fetty Wap is running late,” he said to the impatient crowd.

After Heagy revealed that though Fetty Wap’s team had arrived, Fetty Wap himself had missed his flight and would not be performing, students boo’d with disappointment.

“Like everyone else, I was pretty disappointed,” Memon said. “But also, I think it’s pretty funny that he missed his flight. It makes for a fun story to tell.”

Heagy emphasized that students should reach out to him with any feedback on how SPC can “better serve” the student body in the spring.

Fortunately, Harlow had already arrived and was ready to perform. After a quick introduction from his DJ, he sauntered onto the stage to the world-famous “Squid Game” theme music. 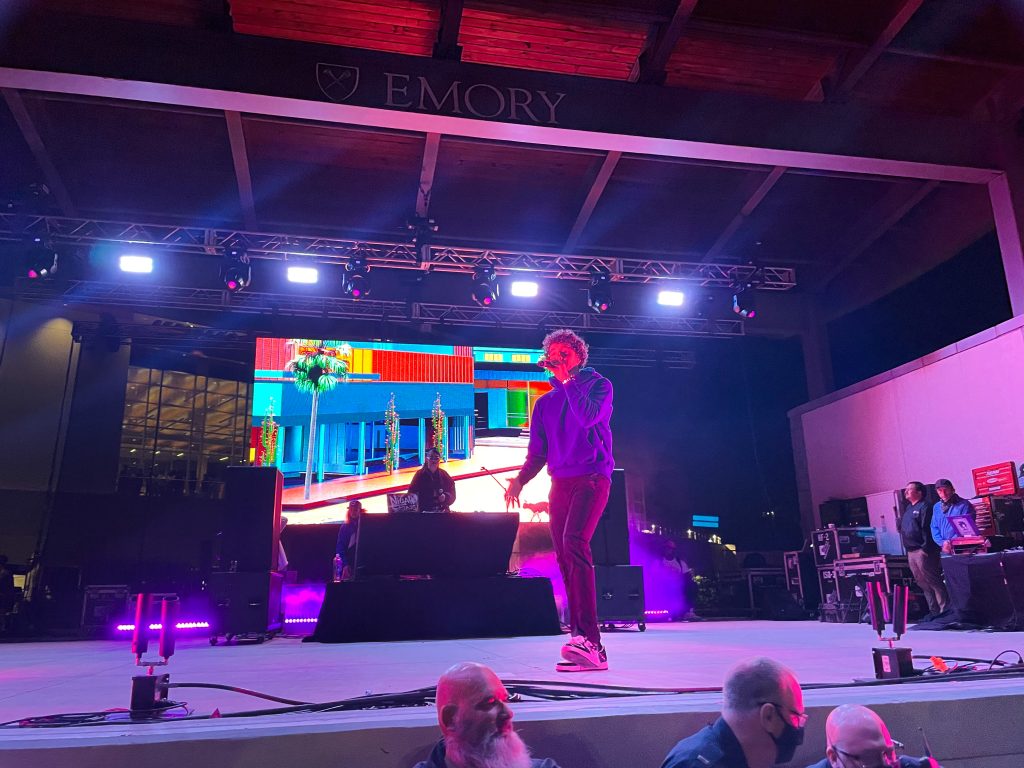 In seconds, the crowd’s energy shifted from irritated to thrilled.

Despite all the confusion and impatience, Harlow entertained students through personalizing the concert experience to Emory. “There was a girl that used to go to Emory that I was so obsessed with,” Harlow said. “I’ve been on this campus before because she let me in her dorm.” The crowd erupted into laughter.

“He was talking to us and vibing with us on such a great level that it just made the whole experience enjoyable,” Memon Artur (23C) said, noting that though she wished he had stayed longer, she appreciated his performance of Owl City’s “Fireflies.”

“SPC decided to jokingly tease that the headline artist would be Owl City, which students seemed to find funny,” Heagy wrote. “Without any planning, Jack Harlow decided to play a rendition of ‘Fireflies’ for the crowd. We couldn’t believe our … ears.”

Though many students waited for under an hour of Harlow performing, several audience members said they enjoyed every second.

“I’ve been to other concerts where they don’t really talk to you and they just sing their songs, and that’s it,” Bazata said. “But he seemed like he actually cared.”

After the concert, SPC volunteers took a photo with Harlow. Heagy noted that he “thanked [Harlow] for his great performance on behalf of the Emory student body.”

SPC requested Emory Emergency Medical Service (EEMS) to “be on standby” for Swoop’s Ball in case of an emergency, EEMS Command Staff said. The Office of Critical Event Preparedness and Response staff, an emergency medicine physician and two ambulances joined the 12 EEMS personnel at the concert.

Eight students received care at the concert, with one person taken to a local hospital for additional medical attention, EEMS Command Staff added.

However, Heagy said that the concert still accomplished SPC’s objectives.

“As members of the Student Programming Council, we judge the success of our events on their ability to serve our mission to enrich the Emory community by providing a variety of quality entertainment for the entire university, making the Emory experience both enjoyable and memorable,” Heagy said. “Given Jack Harlow’s amazing performance and current popularity, we hope we accomplished this goal.”