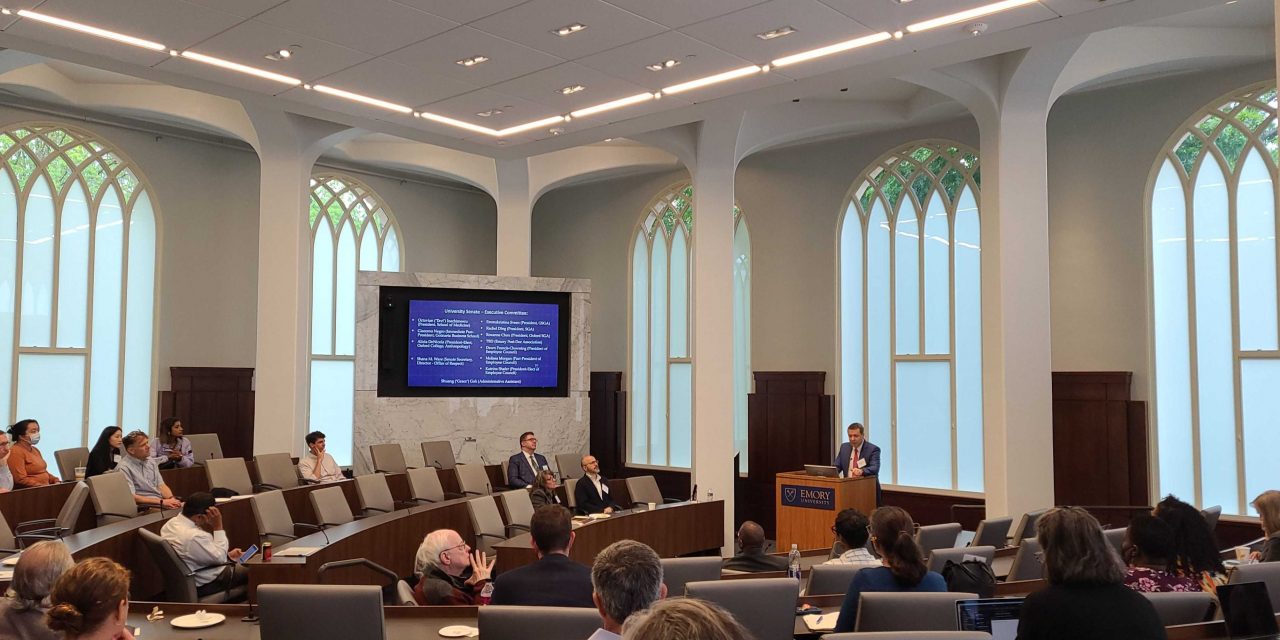 The Emory University Senate held its last meeting of the 2021-22 academic year on April 26. The Senate voted unanimously to pass the Consent Agenda, which “usually lumps routine procedural decisions together into a single motion to save time,” Senate Administrative Assistant Grace Goh wrote in an April 27 email to the Wheel.

Goh explained that yesterday’s agenda included the minutes from the March 22 meeting and the 11 Senate committee rosters, which appointed new chairpersons and approved new members.

The Senate spent the majority of the meeting discussing their plans for the next academic year, noting the future of Emory’s construction projects and Metropolitan Atlanta Rapid Transit Authority (MARTA), as well as plans for the Office of Compliance and campus life.

Vice President for Campus Services Robin Morey spoke first at the meeting. He discussed Emory’s Land Use Plan, which is revised every six years with the help of the Senate’s Committee on the Environment (COE) to ensure that the University is utilizing its 800 acres effectively to maximize growth opportunities. It was last revised in 2016.

Emory Master Planning’s main change this year was classifying previously “managed” land — which is land that is developed to some extent but is not a significant contributor to Emory’s campus and can accommodate limited redevelopment — as “developable” land, which are areas of campus that are preferred for redevelopment before the use of other land categories. This will allow the University to move forward with several construction endeavors.

Emory is set to break ground on phase one of graduate student housing fall 2022, which is expected to add 535 beds by its completion in fall 2024. The building will be located across the street from North Druid Hills High School.

The housing will be made up of “microunits,” offering a range of apartments from a 333 square foot studio with one bedroom and one bathroom to a 699 square foot unit with two bedrooms, two bathrooms and a common area. Morey said the plans for the project were shaped by graduate student surveys.

Phase two will be “informed by phase one” in terms of the products and units provided, Morey added. The second phase is predicted to add 500 beds in fall 2026 or 2027.

The project has caused controversy since its proposal last summer. In August 2021, Druid Hills High School representative Marshall Orson told the Wheel that the school district was concerned about the graduate student housing’s impact on traffic congestion. He explained that drivers face a dangerous “blind curve” when exiting the high school, and the University’s project could interfere with plans to create a safer intersection.

Morey noted that  Emory will be widening Haygood Road to better manage traffic created by the graduate student housing. This was supposed to occur over the summer, but Morey said the date has been pushed back to winter break due to permitting problems.

In response to a question from Vice Provost for Diversity and Inclusion Carol Henderson, Morey noted that the University is keeping diversity in mind while constructing graduate student housing, and recently held a fair to host minority contractors and discuss opportunities to work together.

The University is also working on construction in Executive Park. The Emory Musculoskeletal Institute (MSK) opened in October 2021, and the new Children’s Hospital of Atlanta (CHOA) campus is predicted to open in September 2024, according to Morey.

The next step is constructing a hotel between MSK and CHOA to accommodate patients, Morey said. He did not provide a construction date.

About three miles away from MSK, the Briarcliff Mansion — the estate of Asa Griggs Candler Jr., who was the son of Coca-Cola founder Asa Griggs Candler — stands in poor condition. Morey said the mansion needs to be restored and the Georgia Mental Health Institute, which shut down in 1997, needs to be demolished, although there is no specific program to do so.

Morey hopes to push development in the broader Briarcliff community, which he believes could provide Emory with opportunities to pursue brain health research, nursing partnerships, childcare and eldercare.

Two other members of the Senate reinforced the need for child care in Briarcliff, although Emory has not established any concrete plans to begin formulating a program yet.

COE Chair Carolyn Keogh questioned Morey about whether the developmental plans align with the University’s commitment to sustainability, to which he said it depends on the project itself. Emory’s goal is to ensure that the graduate housing is sustainable, but the University has much less control over other projects, such as Briarcliff.

“We will continue to urge and work with them to try to push that to the extent that they can,” Morey said. “We’re going to try to bring all those projects to COE, the development committee as well, so we can think about how we can try to integrate that in.”

The University will finish constructing the health sciences research building II and R. Randall Rollins Building this summer. Renovations to the Emory Conference Center Hotel will be complete by this summer or fall, and the Winship Cancer Tower is scheduled to be completed in spring 2023, Morey added.

The new student affinity spaces in Cox Hall will be completed by fall 2023, which Morey said is “really going to elevate their stature and really give them a much better experience.”

Professor of Law and elected Senate member George Shepherd raised concerns about Clifton Road, which he described as a “five-lane freeway” that has become a “chasm” in the middle of campus.

“Its motto is ‘one Emory,’ but there are at least two Emorys — one on one side of Clifton, and the other on the other side of it,” Shepherd said. “The focus will be on maybe slowing down traffic, deterring people from coming into Emory in their car so much, rather than providing a fever dream from 1950s and 1960s … where you have a freeway rushing through the middle of the community.”

Morey responded, saying the University is “trying to improve the pedestrian experience,” noting the addition of a bike path from the nursing school to Haygood Drive and into the core of campus. He also said that although he expects less traffic once CHOA moves to Executive Park, Emory is looking into improving the major intersections of Clifton Road and Haygood Drive, Emory Point and the graduate schools. An emergency room also sits on Clifton Road, Morey noted.

Associate Vice President for Planning and Engagement David Payne updated the Senate on MARTA’s Clifton Corridor Transit Initiative. He said MARTA is considering using a Chessie Seaboard Consolidated (CSX) rail corridor, an existing line that goes between the Centers for Disease Control and Prevention and Emory.

“CSX, they recently confirmed, is going to work with MARTA to have a divided transit while they’re keeping the railway there as well,” Payne said. “That would be a huge cost savings and a very efficient way of actually bringing transit through this area.”

“They have not made a decision,” Payne said. “They will be filing an updated, locally preferred alternative in October, and that will include mode, whether it’s light rail, BRT. It will also look at the different routes for the preferred route.”

MARTA is also considering extending into Downtown Decatur, which would require them to go down North Decatur Road. Payne said doing so would be “really tricky” and receive some pushback, noting that MARTA will begin public outreach in May.

“This is part of our planning because it really affects so many things on our campus,” Payne said.

Kenya Faulkner, who was named the University’s chief compliance officer in November, discussed the future of the Office of Compliance, which works to ensure that the University is following laws and regulations.

“If we can minimize some of the compliance risks that are across the University, you can go back and do it in your job,” Faulkner said. “Compliance is never 100%, because we have a business run, we have things to do at the University. So we can’t always close those gaps, but what I am here to do is to help you close them as much as possible.”

Faulkner’s primary goal is to broaden the Office’s focus to compliance across the University, as it has historically focused on research. She said she will be sending out a risk assessment in about a month.

“I’m looking at rebranding the Trust Line so that people know where they can call if they have issues — Title IX, fraud, internal audit or anything like that,” Faulkner said.

The Office of Compliance will also be sending out newsletters with general updates, among a general rebranding of the Office and website, as well as increased hiring.

Faulkner said she is excited to get started at Emory, where she hopes to spend her time around campus at the sites of potential compliance issues, rather than sitting in her office.

“I can see the support that I’m getting and I see people that reached out to me,” Faulkner said. “Do I feel pressure? Absolutely, but that’s what it’s all about. So find me, call me if you have an issue.”

Campus Life Committee Chair Bridget Guernsey Riordan discussed the Committee’s plan to partner with TableTalk to host a “community-wide gathering of minds” on the Quad in September. She said different tabletop discussion points will be set up to foster conversation between members of the Emory community.

“Students are interested in wanting to find out ‘what does President Fenves like to do for hobbies?’ or what does their favorite faculty member like to do on the weekends?” Riordan said. “They’re interested in people as human beings, and so that’s what the goal will be.”

Riordan added that she hopes the event will allow students and faculty to build relationships on shared interests or backgrounds.

“We’re talking about big Emory and trying to make it into community Emory,” Riordan said.

Senate President Octavian Ioachimescu ended the meeting with a Year in Review, discussing the progress made during the 2021-22 academic year and encouraging Senate members to consider what they would like to see in the future.

“The next step is really up to us,” Ioachimescu said. “How can we learn from the past? How could we resolve potential past and present identity crises? And how do we want the future to look? While I do not have the answers to these… questions, let’s keep working.”