Track and Field Has Strong Start to Outdoor Season 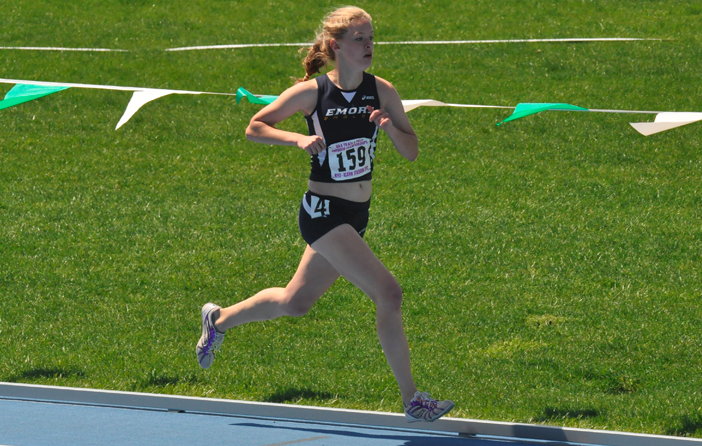 The Emory men’s and women’s track and field teams began their outdoor seasons last weekend by hosting over 45 schools at the Emory Invitational. Both teams started off the season on a positive note, with the men coming in fifth place with 59.50 points, and the women winning the event with 109 points.

Coach John Curtin explained how he expects the transition to the outdoor season will benefit his team: “We get a little bit of advantage as a southern team,” Curtin said. “We had perfect weather for our first competition, and the kids really took advantage. In addition, we are usually pretty good at the additional outdoor events. We throw javelin well, on the women’s side we run the 10k well and we hurdle very well on both sides. These additional events are a real plus for our team.”

Emory’s two distance relay teams finished in second and third place. The team of McBane, junior Jake Schlessinger and sophomores Winton Leung and Shane Sullivan posted a time of 10:34.18, narrowly beating out teammates freshmen Ian George and Tyler Breeden and seniors Lukas Mees and Josh Traynelis, who finished the relay with a time of 10:37.01, good for third place. Curtin praised the performance of College senior Traynelis for running out to a big lead during his leg of the relay.

The men’s team was also impressive in the field events. Seniors Jacob Seigel and Spencer Koh earned fourth and fifth place finishes in the discus and javelin, respectively, with distances of 44.56m and 48.28m. Curtin also was impressed by sophomore Charlie Hu’s personal best in the high jump.

The women’s side provided many impressive performances en route to winning the meet.

The Eagles won three events, all distance runs. Senior Aileen Rivell won the 5k race with a time of 17:37.20, marking the first time in her collegiate career winning a race. Senior Julie Williamson won the 1,500m run, and ran the opening leg of the distance medley team (which included junior Elizabeth Mango, sophomore Gabrielle Stravach and freshman Clare Ubersax) that would take first place with a time of 12:16.46. The 4x800m relay team consisting of freshmen Kristi Kwok and Radhika Shah, sophomore Hanna Saadegh-Vaziri and junior Alexa Young came in second place with a time of 9:49.15. Amanda Martin finished third in the 5k race with a time of 17:46.37. Coach Curtin felt Martin’s strong performance really “jumped out.”

“She improved by over a minute in women’s 5k to take third place,” Curtin said of Martin. “She broke 18 minutes in the 5k for first time in amazing fashion. Amanda is a real competitor.”

Highlights from the women’s field events came from freshman Jordan Small, who took tenth place in the high jump with a mark of 1.50m and freshman Kaleena Jesson who finished ninth in the pole vault.

Curtin mentioned the performance of sophomore Valerie Linck, who set personal bests in both the javelin and the high jump, adding that he expects her to be competitive when United Athletic Association (UAA) competition rolls around.

On the whole, Curtin felt the Emory Invitational set a positive tone at the beginning of the season for both teams. Emory will host another meet, the Emory Classic, on a smaller scale on March 25 and 26. Curtin looks forward to the team building on strong performances and continuing to improve.

“Some of our kids are ready to step it up to another level,” Curtin said. “Many will run in different events than last week to get a good evaluation of everybody and where they are at this point in the season.”