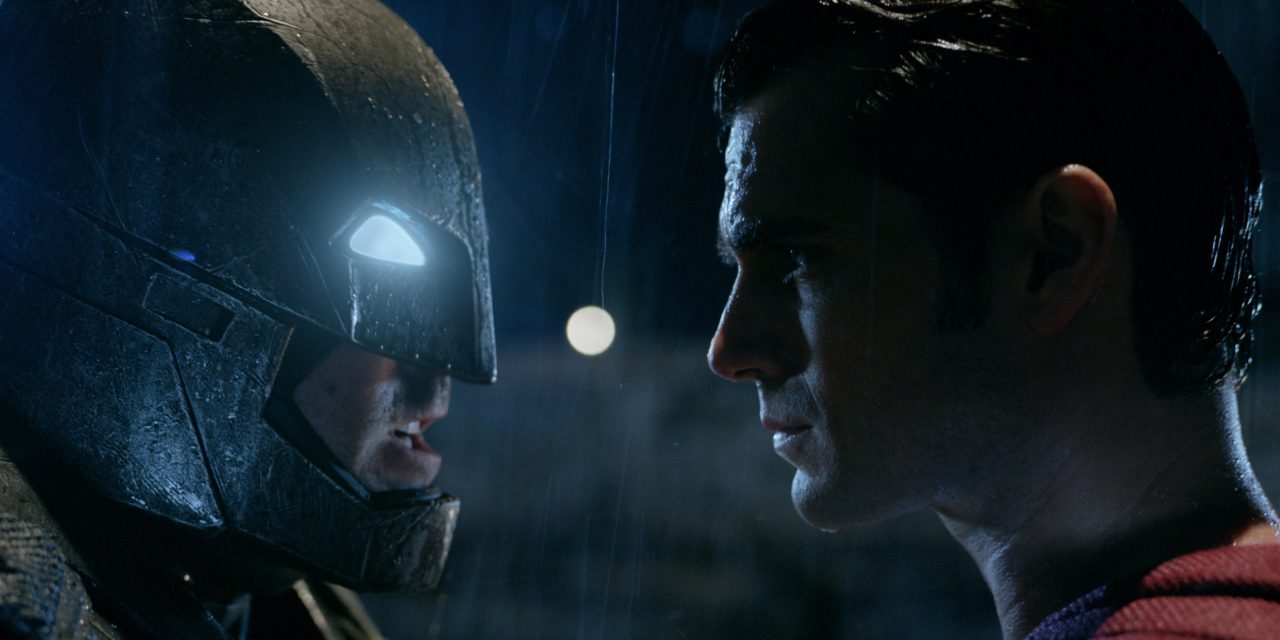 How am I to struggle against the inner fanboy of my nature? With Batman v Superman: Dawn of Justice, I am deeply conflicted, wanting to laud this film for all that it does right and wanting to hide all its flaws. Yet, as a critic, I cannot ignore the dichotomous nature of the film itself. It is a film of highs and lows, nothing in between.

Following up on Man of Steel, we rejoin the DC universe 18 months later. The effects of Superman (Henry Cavill) are fully felt, as the world continues to debate his presence after the destruction of Metropolis, wrought by his battle with alien invasion. The government questions whether he is good for the United States and, on a larger scale, good for the world. While he is popular with the public, a number of powerful people throughout the world oppose him.

One of those powerful people is Lex Luthor (Jesse Eisenberg) who has slid into governmental meetings and high-class events like a devil to influence the government to join him in his crusade against Superman and give him the weapons to defeat Superman. The other is Bruce Wayne (Ben Affleck), who saw the direct effects that Superman can have on the world when Wayne’s Metropolis building came crashing down, killing a number of Wayne’s employees in front of his eyes. The tragedy made Wayne bitter and cruel, igniting his vendetta against Superman that ultimately drives the rest of the film.

I use a lot of proper nouns in that summary because with any comic book property the characters are paramount. This is where Batman v Superman is at its strongest. The DC crop of super heroes, unlike the decidedly more down-to-earth Marvel Studios figures, is mythological, like Greek gods standing above the world and descending down to rescue it from the worst of humanity.

And this film understands that in the best way. While I may have quibbles with specific adaptation choices, there’s an understanding of how these characters play within their own world that keeps the film unique — ambitious in a way we’ve not seen before in this genre. An attempt to forge its own path and find something thoughtful and dark.

I’m thinking specifically of the three most maligned cast members: Gal Gadot as Wonder Woman, Jesse Eisenberg as Lex Luthor and Ben Affleck as Batman. In the face of their respective challenges, each seems to rise and exceed.

Gal Gadot (though she gets little time) is absolutely phenomenal, making the most of every line and displaying a talent for relishing in and selling savage action sequences. Jesse Eisenberg finally gives us a different Lex Luthor, a clear echo of his Mark Zuckerberg performance in The Social Network with more than a hint of Heath Ledger’s Joker. It’s remarkably compelling, even when it crashes right into being the silly villain from a much more over the top film.

But it’s Ben Affleck’s Batman who steals this film right out from under everyone around him. He’s badass, conflicted and displays a great deal of detective skill and spycraft in his problem solving, a particularly new trait for cinematic Batman. He has wonderful chemistry with Jeremy Irons’ equally well-performed Alfred. He provides this film with its moral conflict — its core — and I, now, more than ever, anticipate a film centered on him. Batman is the unparalleled success of Batman v Superman: Dawn of Justice.

But as I said, every high comes with a low, and that low resides in Superman. It isn’t the fault of Henry Cavill, actually. He does a fine job with the character, giving Superman all the presence and charisma he can muster.

But this film makes me believe more than ever that Warner Brothers simply doesn’t know what to do with Superman as a character, or even if they particularly like him. There’s a weakness in the writing of the character; his motivations change from scene to scene. For most of the film, I’m not sure whether the film itself believes that he is a hero or a villain, though when it finally reveals its decision, it’s too late to affect my viewing. The damage has already been done.

Director Zack Snyder has indeed composed a world of great moments, mythic elements and things that will make you stand up in your seat.

There’s a Batman fight sequence reminiscent of the Arkham series of video games that took me back to the feeling of pure joy of childhood play in a Batman cape. I’m seeing Batman simply be Batman in the most kickass way. And the first appearance of Wonder Woman erupted the crowd in spontaneous applause, the kind of theatergoing moment I’ll never forget.

There’s so much of this film that is good. Zack Snyder’s direction, Chris Terrio’s script and Larry Fong’s cinematography occasionally craft pure mythological magic, scenes that are visually arresting and wonderful to see. Scenes that make you think. Scenes that reach far beyond themselves to attempt to capture something greater about what these characters mean.

I’ve said before that I believe that Superman and Jesus are foil characters, and apparently Snyder agrees with me. The film is loaded with questions about the nature of God and what it means to be a god. It’s a deeply theological film, and the sheer ambition of addressing such a theme in a film where two men in tights clash has to be admired.

But that admiration goes hand in hand with the more fundamental problems. Every bit of praise I’ve mentioned before now pertains to detached moments, questions and ideas. However, the film has nothing to string them together. There are wonderful bits of dialogue, but so many of them seem to lack a story or character reason to connect with to the audience.

Especially for the first half of the film, I felt dragged along by the endless tide of the history unfolding before me. Characters are introduced, scenes are jumped to, bizarre moments happen and all I can find are question marks. Why is this here? What does this mean?

And it isn’t that this isn’t a difficult film. But it’s often difficult in the wrong ways. I’m finding myself asking questions and constantly seeing that the film didn’t think through their answers. It’s often like watching a film edited down for cable — I know that scenes are missing, and the presentation here simply makes no sense. This film has massive structural issues and all the amazing moments in the world don’t mean a thing when the next one is just as likely to tank as it is to succeed.

There’s ambition here, I get that. Snyder is trying to represent so much of the inner lives of these characters in dreams and images, trying to make each aspect stand for something more. It’s the strength of comics and specifically, the mythological characters that comprise this film.

But it becomes impenetrable. I can applaud ambition, but ambition must be done within reason, within skill. That’s not what occurs here. It often feels just a hair short, in need of another story session or another pass at the script to be finished. But occasionally, there are story decisions that are beyond baffling to me, that make me question who the hell needs to be fired for signing off on this script.

I believe Zack Snyder and everyone involved feel some sort of love for these characters and worked hard on this film. It shows any time Batman is on screen, it shows in gorgeous shots of Superman saving the world and it shows in the ideas about God, man and the nature of superherodom that I continue to turn over in my head.

The film feels like it is trying to take the advanced class before it’s completed the basics. The film wants to be so much, but it hasn’t found the underlying foundation that would make it work. It knows the comics. It knows what can be cool and awesome. But it doesn’t know why.

I came in wanting so much, and the film gave so much to me. I’ve waited 20 years for this film, and in many ways it did not disappoint. But in many more ways, it did. We see it fly so close to the sun, but its wings melt before our eyes.