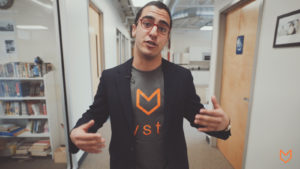 While Emory students often make quips about curing Ebola, Rostam Zafari’s (17C) work is no joke. Within the first month of his college career, he had already formed a team and plan to detect the Ebola virus, leading to the development of Rapid Ebola Detection Strips (REDS), all when Zafari was still only a freshman.

That achievement eventually led to him earning the Cyrus Prize, a $100,000 award that recognizes young Iranian entrepreneurs, March 2015. Zafari’s contribution to society did not stop there, as he decided to donate all the award money in 2016 to the New School, an Atlanta-based high school where he teaches an entrepreneurship course twice a week.

Zafari first began his project on REDS — an affordable screening test for the Ebola virus — for his Foundations of Modern Biology class. Zafari said that he began work on the project with Brian Goldstone (18C), who said he’s proud of what Zafari has accomplished.

“He just has an infectious personality,” Goldstone said. “He’s probably the most energetic, ‘go get ’em’ kind of person that I’ve ever met.”

After the two then-freshmen noticed that the then-current methods of testing for Ebola, a virus most prevalent in low-income countries were complex and expensive, they set out to provide a cheap alternative.

“The current test was tens of thousands of dollars,” Zafari said. “[The test we developed is] a quick pregnancy-like test with a colored reaction to tell if you have [Ebola].”

Emory has provided lab space for Zafari’s work, but has not awarded funding for the project. He has garnered the majority of his financial support through crowdfunding. In the first three weeks after starting his project,  Zafari raised $14,500 on the website Indiegogo.

Goldstone said that he had never met someone as determined as Zafari. From the beginning of their freshman year, Zafari believed in the potential of REDS even when Goldstone did not.

“I was saying ‘Wait. I’m a freshman in college, I can’t be doing this. This is stuff that seniors do.’ Goldstone said, “[Zafari] was the one that definitely pushed saying, ‘No. We gotta try … Who says we can’t?”

The project’s financial support allowed Zafari to donate the money he received from the Cyrus Prize to a cause in which he believes: access to education. Zafari said that he hopes his donation will further strengthen the New School’s mission to teach young people about entrepreneurship through project-based experiential learning.

In concert with his donation to the New School, Zafari has also created a separate startup in collaboration with Mehul Bhagat (18C) called Mystro, which pairs students with mentors that hold similar life interests. Those mentors then help to improve the standardized test scores of their students. Zafari has implemented the program at Emory University, Georgia Institute of Technology, Georgia State University and in other schools around the rest of the Atlanta area.

Zafari’s entrepreneurial spirit is comparable to that of the Cyrus Prize’s first recipient, who was the co-founder of Dropbox, a company currently worth an estimated $4 billion, according to Forbes. Although the award has also given Zafari prestige, the entrepreneur admitted there is one thing he would have done differently in pursuing the project.

“I would have loved to have spent a few weeks in [an Ebola] affected area,” Zafari said. “I like to live the problem that I’m solving.”

Zafari said he wants also like to learn more about the manufacturing and distribution process behind his project. Although he and his partner developed the intellectual property behind REDS, disseminating the product is a different endeavor.

Zafari said that he plans to spread his affordable diagnostic test design to other medical areas, suggesting the possible development of a test for sexually transmitted diseases in the future.

“The biggest challenge in this [project] has been self-doubt,” Zafari said. “Whenever you work on something innovative, there’s a lot of naysayers. If it were that easy, someone would have done [REDS] already.”