While victories are unfeasible without scoring goals, the Emory University men’s soccer team has leaned on defense to get off to a dominant 5-1-2 start to the season.

The Eagles’ defensive unit is anchored by senior goalkeeper Jack Hudson who has at times more closely resembled a brick wall than a goalie. In the eight games the men’s soccer team has played, he has let in only four goals.

This is Hudson’s final season in an Emory uniform, but it is also his first.

Before transferring to Emory as a junior, the environmental science major played his freshman and sophomore seasons at the University of Kentucky where he was the backup goalkeeper for the nationally-ranked Wildcats.

As is typical for backups, he found playing time hard to come by, seeing action in just two games over the two-season span, all while battling a recurring knee problem that required surgery late in his sophomore year. Around this time, he gave serious thought to calling it quits on his soccer career.

“I was at a point where I didn’t want to play anymore,” Hudson said. “I had spent so long doing this, and I lost sight of the reason why I enjoyed the sport.”

On top of Hudson’s battles on the field, he was stuck in a major that he did not see aligning with a future career. After weighing his options, he started filling out transfer applications over winter break of his sophomore year, not expecting to return to the field.

But when Emory offered him admission and a spot on the soccer team, Hudson reassessed his love for the game. The large pull to Emory was its academics, but he also wanted a chance to play in front of his parents who live about 10 minutes from campus. Hudson says his parents have attended all of his games so far as an Eagle, just like they had done while he was growing up.

“If my parents hadn’t done what they had done, I would have never been able to do anything,” Hudson said. “I couldn’t have asked for more.”

Coming in as a transfer during the pandemic, Hudson knew that he had to earn his teammates’ respect through hard work on and off the field.

Although Emory canceled fall sports competition last year, Hudson took advantage of the training sessions and intrasquad scrimmages the team was permitted to hold, preparing himself for this season.

When Hudson arrived on campus about a month ago to start his first official season at Emory, he was hungrier than ever to compete, but admits that he was also nervous. So far, he has proven his ability to perform under pressure.

“It’s about being in touch with reality, in the moment,” Hudson said. “When your mind starts to drift, you have to hone your focus back to the game going on in front of you.”

It did not take long for Hudson to assert himself as an effective shot-stopper. Five games into the season, he was named the University Athletic Association (UAA) Men’s Soccer Defensive Athlete of the week. The following week, Hudson received the same honor again after picking up two more shutouts against Roanoke College (Va.) and Christopher Newport University (Va.).

While Hudson says the individual awards are reassuring, he does not care about them as much as he does about finding ways to help his team win.

“The goalie might win an award, but what matters most is how I can best perform to maximize our overall success,” Hudson said.

On the field, Hudson prides himself on giving his defense as much data about the game as possible. Because he can see the whole field from the goalie box, it is Hudson’s job to tell a teammate if they have a man on them or where they need to be.

Junior midfielder Joe Beare likens Hudson to a de facto coach on the field who brings a wealth of expertise to the game.

“Jack is always the loudest player on the pitch when we have the ball and when we don’t,” Beare said. “He’s on our backs when we’re not disciplining ourselves as we should be as college soccer players.”

So far, the back line has played suffocating defense, led by centerbacks senior Josh Berman and junior Luke Price. Hudson attributes the team’s defensive success to Berman and Price, who have taken pressure off him as the goalkeeper.

Hudson acknowledges there are areas of his game he can take to the next level. He says that elevating his passing game would be valuable to his team’s “play out from the back” style, where the attack starts with the goalie and the back line who use short passes to move the ball up the field as a unit. In order for this style to work properly, the goalkeeper must pass precisely or the team runs the risk of losing the ball near their goal.

“I want to improve on short, sharp touches,” Hudson said. “It’s a hard skill to do, not just the technical side of it but also the tactical side — recognizing when to play certain passes and when not to.”

Hudson plans to develop his footwork with the goalkeeper coach Felipe Quintero who trains with Hudson and the other goalkeepers. In working with Quintero, as well as senior Cole Gallagher and junior Peter Wagner, Hudson feels he is gaining valuable knowledge, noting that Quintero is one of the best coaches he has ever worked with.

“He’s very knowledgeable about the role and has a lot of playing experience that helps all of us maximize our training time,” Hudson said.

The entire coaching staff has always encouraged Hudson to take risks and has supported him through mistakes, but Hudson, like all goalkeepers, holds himself to a standard of perfection. After letting in a game-winner against Calvin University (Mich.), Hudson was disappointed, but he knows better not to let one play faze him.

“I’ve made tons of mistakes and errors, but if you start nitpicking at every little thing, you can come up with a thousand things you can do better,” Hudson said.

Hudson’s teammates have been impressed with their new goalie and are confident in Hudson as their last line of defense.

“Against the University of Lynchburg (Va.), he made the three best saves I have ever seen in a span of 15 minutes that kept us in the game,” Beare said. “I think we have the best Division III goalkeeper on our team.”

With veteran players forming the base of the team and Hudson in goal, the men are poised to bring home their first UAA title since 2012. Hudson, in particular, is up for the challenge.

“If you try to go for anything less than a championship, what’s the point in even trying?”

Editor’s Note: Jack Hudson (22C) is a contributing writer for the Wheel. 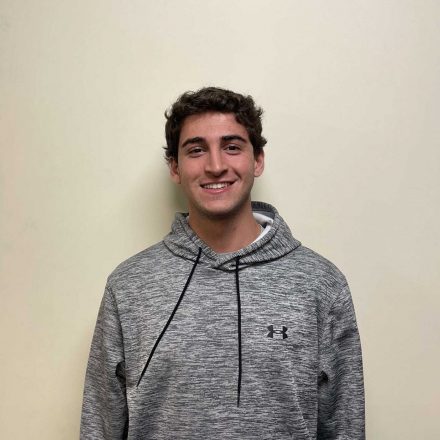 Adam Herman (25C) is from Glenview, Illinois, and is on the pre-BBA track. When he’s not exploring new restaurants or spending time outdoors, Herman is likely rooting for the Chicago Bulls, Bears and Blackhawks.