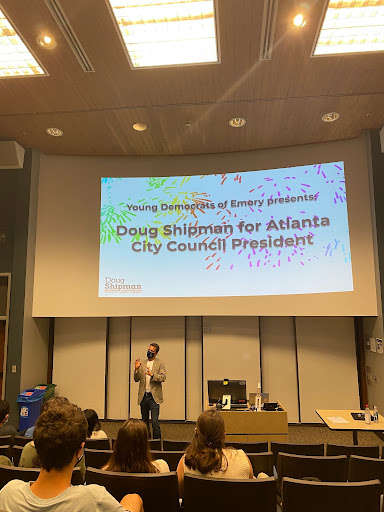 Shipman discussed his Emory roots and how his time on campus influenced his life after college. At Emory, Shipman said he prioritized civil and human rights by taking classes about identity issues as the University established its Center for Women, the Center for LGBTQ+ life and the African American Studies department.

After graduating in 1995 with a degree in economics and political science, Shipman said he is most proud of his continued work with civil and human rights, such as being the founding CEO of the National Center for Civil and Human Rights.

Shipman elaborated on how his experiences in the business and arts worlds also contributed to his motivation in running for city council president. As the CEO of the Woodruff Arts Center, he ensured that its development would lead to new partnerships with diverse business leaders in the Atlanta community.

“Having a background in business and finance of any level and just the ability to navigate well and have a deep interest in how we restructure the budgets and policies is very valuable,” Shipman said.

After sharing his experiences since college, Shipman took questions from the audience. Questions ranged from domestic political life to local issues in the Atlanta area.

One student asked Shipman his thoughts on the most pressing issue in today’s political climate.

“I think the most powerful force is the demographic shift,” Shipman explained. “We are dealing with a fundamental shift in the way the country sees itself, and that is causing all kinds of disruptions.”

As city council president, Shipman said he would strive to make Atlanta more inclusive and reduce inequality. He noted the 20-year difference in life expectancy between neighborhoods that are just three miles apart in northern Atlanta. Shipman explained that he believes vulnerable populations in Atlanta are neglected due to the uneven distribution of the local budget and the lack of resources like parks in poorer areas.

Shipman said he wants to equalize neighborhood infrastructure as council president. Investments in a healthy neighborhood are key, and these are indicative of larger and national issues that can begin to be improved at a local level, Shipman said.

Another student asked Shipman about the most transformational policy that he would like  to develop. Shipman responded that improving childcare and early childhood education through sponsoring initiatives at the local level is important.

“In a kindergarten class, a third are ready to go, a third are behind and can probably catch up and a third have never seen a book,” Shipman said. “That is too wide of a spectrum to effectively teach to.”

After the session, Shipman had personal conversations with some students and mentioned his friendship and experience working with the late Congressman and Civil Rights icon John Lewis at the National Center for Civil and Human Rights. Shipman said that Lewis taught him what being a true inspiration and role model means.

No matter the political party, Shipman claimed that if more and more people at Emory and around Atlanta vote, there will be positive outcomes. He added that Georgia is in need of young adults to practice politics.

“Doug Shipman was really inspiring and engaging to listen to,” said Young Democrats of Emory Secretary Ash Shankar (23B). “He spoke knowledgeably about all the questions he answered and convinced me that he cares deeply about the Emory community. It is also just really exciting to see an Emory alumnus run for office.”