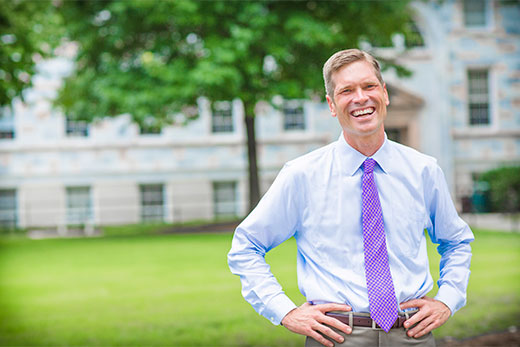 Emory College of Arts and Sciences (ECAS) Dean Michael Elliott has resigned from Emory University to become the 20th president of Amherst College (Mass.), his undergraduate alma mater, according to a June 1 email to ECAS students from Elliott.

The Amherst College Board of Trustees unanimously approved Elliott’s appointment, according to a June 1 Amherst press release, which states that members of the Board were impressed by both the “breadth and depth of [Elliott’s] scholarly work” and his “record of excellence in leadership at Emory.”

Elliott will assume his post at Amherst on Aug. 1. He will succeed outgoing Amherst College President Biddy Martin, who has held the position since 2011. Martin will take a leave of sabbatical, then will return to Amherst as a faculty member, according to a Sept. 13 Amherst press release.

Emory College of Arts and Sciences Dean Michael Elliott was named the next president of Amherst College. Photo courtesy of Emory University

University President Gregory Fenves wrote in a June 1 University press release that Elliott had a profound commitment to ECAS.

“Even as the leader of Emory College, he showed the traits of all great professors — curiosity, inspiration and ambition,” Fenves wrote. “ I know he will elevate Amherst College and make significant contributions to his alma mater.”

Elliott’s tenure at Emory began in 1998, when he joined as an assistant professor of English and a director of graduate studies. He was named as the dean of the ECAS in 2017.

In the June 1 email, Elliott wrote that being dean was one of the greatest experiences of his career.

“I have learned from you, especially during my time as dean, what it means to support this vibrant, inspiring community and its students,” Elliott wrote. “I am immensely grateful to have served as your dean the last six years, and I am proud of you.”

In his time as dean, Elliott developed Emory College’s strategic plan, “Leading the Liberal Arts and Sciences,” which focuses on expanding undergraduate liberal arts education at Emory by increasing faculty support and enhancing Emory’s research prominence. Additionally, he co-lead this year’s launch of the Student Flourishing initiative, which will manifest in the opening of the Pathways Center this fall.

Elliott has also invested in expanding faculty diversity, according to the University press release. Since 2017, Emory has nearly doubled the percentage of faculty members belonging to a historically under-represented group.

Professor and Chair of African American Studies Carol Anderson said in the Amherst press release that Elliott was a “smart, kind and transparent” leader in diversifying the College.

“[Elliott] has been a tremendous leader, visionary and partner in helping to build African American studies and in sending an incredible signal throughout the college that diversity is excellence,” Anderson wrote. “And he did this well before the social justice uprising of 2020, not in response to it.”

Provost and Executive Vice President for Academic Affairs Ravi Bellamkonda echoed Anderson, writing in the University press release that Elliott’s focus on faculty eminence and flourishing showed his devotion to the College.

“[Elliott] has given so much of himself to Emory College and Emory as a whole to help us become more excellent, more inclusive and more successful,” Bellamkonda wrote.

Bellamkonda attributed this pattern to the excellence of faculty at Emory.

“The fact that members of our leadership team are sought after to take the helm at other great institutions is not only a tribute to the individual, but a clear sign that others recognize Emory’s strong vision and leadership in academia,” Bellamkonda wrote.

An interim dean will be named in the next few weeks before the University initiates a nation-wide search for the next ECAS dean.