A Nuanced View On Climate Skepticism 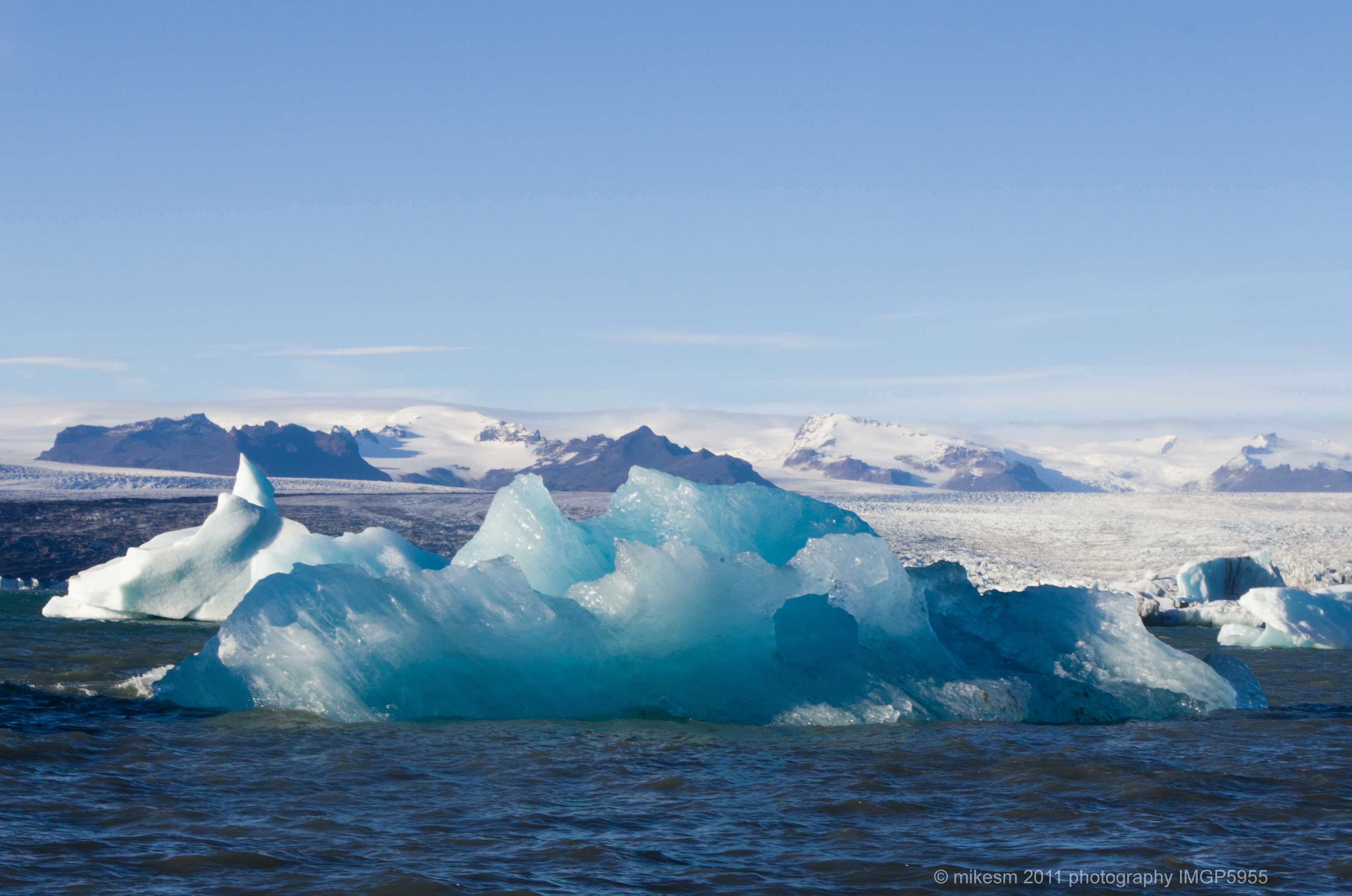 Over the past few decades, discourse on climate change has pervaded political and scientific spheres. It, generally speaking, has split commentators into two camps. On one hand are the “believers,” generally portrayed in the media as the intellectual elite. On the other hand are the “deniers,” generally envisioned as scientifically illiterate. Many Americans fall in the latter category.

A major review of the academic literature published by the Journal of the American Medical Association (JAMA) in October 2014 noted:

“Two decades of polling suggest that about two-thirds of U.S. residents believe that climate change is occurring; of these about two-thirds (or about 40 percent of the total) believe humans cause it. About half (or about 1 in 3 overall) believe it will pose a serious threat in their lifetimes.”

The current discussion centers on the global ramifications of climate change. JAMA’s conclusions paint a bleak picture for the future of the world. Diseases exacerbated by air pollution such as waterborne disorders and asthma will be increasingly common. The frequency of mega heat waves will rise by a factor of five to ten over the next 40 years. Climate change will drive down food production worldwide by two percent per decade, the effect of which is especially acute considering that the global demand for food will rise by 14 percent per decade. And the list goes on.

The first flavor denies that the Earth’s climate is changing at all. This view ignores the fact that each of the last three decades has been the warmest since 1850. It does not mention that the Arctic has lost half of its average summer thickness since 1950 (Overheated: the Human Costs of Climate Change), despite an anomalous short-term reversal in that trend due to a slightly colder winter. In its latest report, The Intergovernmental Panel on Climate Change (IPCC), a collection of climate experts organized by the United Nations (UN), called the evidence supporting climate change “unequivocal.”

The second flavor argues that the Earth is warming; humans are not the cause. This view neglects the fact that changes in temperature over the past 400,000 years map almost perfectly to changes in atmospheric CO2 levels. 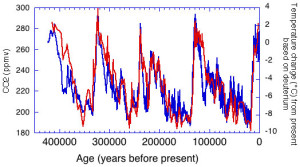 Moreover, carbon emissions have skyrocketed since the Industrial Revolution. Carbon dioxide and methane have reached levels unseen on Earth in the last 800,000 years, according to the IPCC.

The near consensus among climate scientists, 97 percent of whom believe that humans drive the rapidly warming climate, speaks volumes about the mountain of evidence in support of human-inflicted climate change.

The third flavor of climate skepticism concedes that the Earth is warming and that human action certainly contributes to it but rejects the most common and direct prescription — reducing carbon emissions. Professor Bjørn Lomborg of the University of Copenhagen argues most prominently and persuasively from this perspective. While the other avenues of climate skepticism lack any support in evidence, Lomborg’s analysis has some merit that is mostly ignored. The latest analysis published by his think-tank, the Copenhagen Consensus Center (CCC), gathered some of the best contemporary thinkers, including World Bank economists, professors and researchers including Nobel Laureates Finn E. Kydland and Thomas Schelling. Members of this think-tank argue over the most rigorous and comprehensive analyses in academic literature that evaluate solutions to global issues.

They debate their own academic works and those of others to decide which solutions best represent the effectiveness of global initiatives. Hundreds of experts have participated in this discourse, including economics Professor Anthony Venables of the University of Oxford, international nutrition Professor Reynaldo Martorell of Emory and seven Nobel Laureates. The goal is to answer a single question: How can the world best spend its money to achieve the greatest possible outcomes?

Therein lies the central tenet of the third flavor of climate skepticism. The implementation of carbon reducing policies, such as modernized filtration in factories and effective monitoring of corporate emissions, places immense costs on governments and pulls money away from better causes.

For example, reducing emissions enough to achieve an atmospheric carbon concentration of 450 parts per million (ppm), which is necessary to keep the increase in global temperatures since the Industrial Revolution below two degrees Celsius (35.6° F), would produce less than one dollar of social good for every dollar spent.

Why is prioritization important? Simply put, global development funds are limited, while the necessities for funds are unlimited. While the UN creates its Sustainable Development Goals (SDG’s) to guide the international agenda for the next 15 years, it should realize that adding too many goals would dilute the investment into each one. The previous set of international goals had eight goals and 18 verifiable targets; the agenda up for negotiation has 17 goals and 169 targets. The world cannot do it all. The global share of developmental assistance as a percentage of gross national income stands at less than half of what the developed world has pledged. As President Obama and other world leaders focus on the global impacts of climate change and as the UN enumerates the goals that dominate the worldwide agenda for the next 15 years, hard choices must be made on how to allocate a limited pool of funds to accomplish the most good.

Again, in a perfect world, the international community would do it all, from reducing emissions to providing universal contraception. But in today’s world, the international community does neither because it has not focused on specific tasks as it needs to. Prioritization of global funds, despite being a messy and unpopular task, is a necessary one in order to do the most good for the world.

Professor Lomborg has long argued that the world should place climate change at the bottom of its priority list. His book, The Skeptical Environmentalist, drew backlash from many thinkers and scientists when it was published in 2001. His later book, Cool It: The Skeptical Environmentalist’s Guide to Global Warming, drew similar criticism for appearing to be very similar to other climate skepticism arguments. The first report made public by the CCC included the following chart of which initiatives to prioritize, with climate change literally at the bottom of the list. 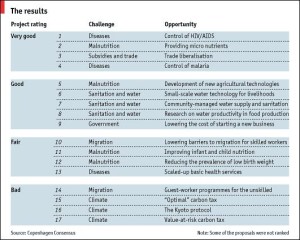 Climate change has been, is and will continue reshaping the world, but the argumentative burden on action needs to be higher. Rather than prioritizing the biggest problems, the world should prioritize the best solutions. This kind of argumentation certainly differs from the rationales of climate skeptics in American politics and should play a greater role in today’s discourse.

While the CCC’s analysis of social good is open to criticism, it represents a significant departure from previous literature by directly comparing development initiatives and recognizing that some are better than others. If another analysis finds reducing carbon emissions a more worthy initiative than any other using a superior methodology, then a much higher level of debate than that which occurs today would be necessary.

To date, no such competing analysis has been published. An in depth discussion of the CCC’s methodology is welcome, but this type of analysis needs to be at the center of today’s debate, rather than being an idealized mantra that neglects real world trade offs. In 2004, The Economist applauded Lomborg’s efforts in pioneering necessary cost-benefit analysis of many initiatives, arguing that he be “congratulated for his intellectual entrepreneurship.”

If the international community had unlimited funds, resources and political will to improve the world, it would take every action that would provide any benefit. Reducing carbon emissions is one of those actions. The evidence in support of it is overwhelming.

But in the world we live in, all policies have trade-offs. The CCC advocated that the UN and other development agencies invest their efforts in 19 goals, including halving malaria infections, increasing girls’ education by two years and increasing immunization by 25 percent. Reducing emissions was not one of them. In pursuing these 19, rather than any other goal, “each dollar of development spending would do four times more good.” If the world can effectively double or quadruple its development budget to maximize its effect throughout the world, it has an obligation to do so. Even if that plan for optimization skips reducing emissions, it is still a valid plan worthy of debate.

While Lomborg denounces carbon reduction policies similar to those endorsed by the Kyoto Protocol, he notes some actions that would mitigate the effects of climate change in a cost effective way. For example, eliminating energy subsidies in the developing world, which waste $550 billion annually, would be a step in the right direction.

The prioritization of climate policies based on realism and cost effectiveness should play a prominent role in the agreements of the Paris Climate Conference taking place in late November and early December. Yet, if past conferences are any indication, this will not be the case. Only smarter goals can guide the world to a greener and more prosperous future.