The following op-ed was submitted by Joshua Niemtzow, Emory J Street U Outreach Chair, and written as a collaborative piece with the group’s members.

Imagine if someone asked you if you were “pro-America.” As an informed college student, you would probably respond in the affirmative, while acknowledging some of America’s flaws and your disagreement with certain policies. Hardly anyone would question your patriotism. But, when someone asks if you are “pro-Israel,” the question seems to demand a hard yes or no answer. Doesn’t this seem a bit a hypocritical? Loving your country and being critical of it are hardly mutually exclusive — Americans know this instinctively. When discussion focuses on Israel-Palestine issues, however, why is it that Americans insist on obtaining hardline binaries on political positions, from which dissent is treason?

Emory J Street U, one of the newest organizations on campus, refuses to accept this dichotomous premise. We, the members of Emory J Street U, are ardent progressive Zionists; our chapter consists of Jews and non-Jews alike, all of whom share a deep attachment to Israel and its people. Our members have family and friends in the country, and many have visited the land multiple times. We want to see Israel thrive as a secure Jewish and democratic state, and because of this vision, we have serious reservations about the current direction of the country that we hold dear.

We are committed to ending Israel’s occupation of the West Bank and are dismayed by the human rights abuses and poor living conditions of Palestinians living in the territories. These violations of both law and our own values put Israel’s security, longevity and national character at risk. We believe that the solution to this problem requires two democratic national homelands: one for the Jewish people and one for the Palestinian people. This two-state solution will require each side to make concessions to ultimately provide people with hope for much-deserved peace and security.

At the same time, we condemn the Boycott, Divestment and Sanctions (BDS) Movement as divisive, ineffective and anti-Semitic in tone. We also disagree with the labeling of Israel as an apartheid state.

We are voices of moderation, seeking to be heard in the midst of a partisan bloodbath. Our mission is not to talk in circles around the conflict but rather to advocate for our government. We advocate for it to take an active and prudent role in solving the conflict. But first, we must be able to talk about Israel and Palestine as classmates and as equals.

For while both sides of the conflict have active supporters here at Emory, these groups’ passion and partisanship leads to bitter stalemates. Too often the two sides talk at each other instead of with each other. Last year’s Israel Apartheid Week brought this problem into sharp relief.

Emory Students for Justice in Palestine (ESJP) constructed a wall of information claiming that Israel is an apartheid state. Unfortunately, the response from the traditional “pro-Israel” camp was equally disappointing. The camp constructed a “Truth Wall” to refute the claims of ESJP. While the wall could have mentioned the problematic aspects of Israeli democracy in regards to Palestine and Palestinians, it claimed that Palestinians enjoy equal treatment under Israeli law, which is blatantly false. The repeated vandalism of ESJP’s Apartheid Wall further exposed the deep rifts in our community over this issue — rifts that cannot heal without open dialogue and mutual respect.

Similarly, this year, the Emory-Israel Public Affairs Committee (EIPAC)’s Day of Coexistence managed to disregard both Arab student groups and left-wing organizations in its planning and execution. This event, however hollowly pro-peace, proved contradictory and self-serving; it is easy to coexist with your allies, but much more difficult to coexist with those who do not share similar views. Regrettably, a member of ESJP responded to the event in an editorial, which failed to call EIPAC out on its obvious omission but rather rehashed ESJP’s common talking points.

Sadly, the Israel-Palestine conversation at Emory is still hardly a conversation at all. In their work, the groups on both sides simply rally their bases; neither attempt to forge a mutual, campus-wide understanding of the issues. They’re even less willing to tackle those issues head-on. We fear that this weeks’ events will be no different.

By forcing students into this false dichotomy of “pro-Israel” or “pro-Palestine,” we polarize our campus and lose sight of how to fix these issues. For many Emory students, supporting Israel means eating falafel and waving an Israeli flag. Rather than grappling with the tough questions surrounding what “pro-Israel” actually means, these students choose to bypass any sort of political engagement. On the other hand, being “pro-Palestine” is too often a mindless repetition of controversial buzzwords, lacking any mention of current policy or end goals. Both sides are screaming at each other in attempts to drown out the other’s voice, but instead they are only hurting themselves because they are drowning out the issues at hand.

Although it may seem confusing, we say it proudly: we are pro-Israel and pro-Palestine. We envision a campus where we can have a dynamic discussion of the issues and current policy. If the Israeli-Palestinian conflict is viewed as one people against another people, one religion against another, no side will ever compromise. How can we expect a Jewish student to come out against the Israeli occupation? When a criticism of Israeli politics is equated with an attack on Jewish peoplehood, we deny ourselves the opportunity to thoroughly examine current policy. Conversely, Palestinian peoplehood cannot be equated with the actions of extremists in the West Bank and Gaza. On both sides, peoplehood and culture must be respected. Thus, J Street U commits to embracing and celebrating the cultures, histories and current achievements of both peoples. We choose to view the conflict not as one people against another people but as a political conflict with a political solution.

We advocate for the two-state solution. This means a complete withdrawal of Israeli forces from beyond the Green Line. We also recognize the right of the State of Israel to exist and to defend itself. These ideas are not mutually exclusive, but in fact dependent on one another. 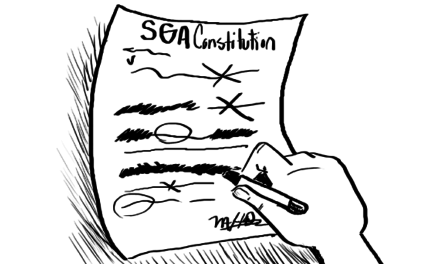 Our Opinion: Not ‘No Confidence’ Does Not Equal Confidence