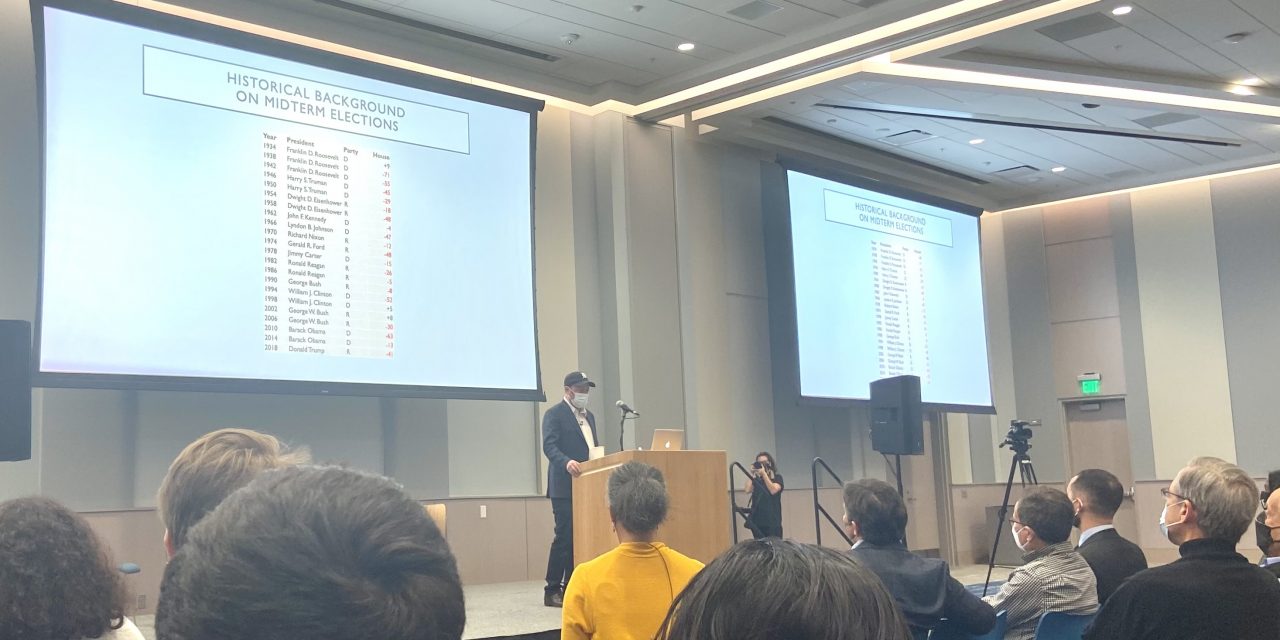 FiveThirtyEight founder and data journalist Nate Silver predicted a grim outlook for Democrats in the upcoming U.S. Senate elections and addressed the possible effects the war in Ukraine could have on the midterms at a Feb. 24 event at Emory University.

Founded in 2008, FiveThirtyEight is a website and blog which emphasizes statistical analysis in researching elections, politics and sports statistics. Silver was named one of Time’s World’s Most Influential People in 2009 after he predicted the outcomes of 49 states in the 2008 U.S. presidential election using the election forecasting system he created.

Silver gave six reasons for his prediction that Republicans would take a majority in the Senate after the 2022 elections: waning presidential popularity, an enthusiasm gap, the effects of “challenging issues” like inflation and COVID-19, the perception of Democratic candidates as “too left,” Democratic retirements and, white and rural voter bias in Senate elections.

Out of rural, small town, suburban and urban populations, Silver said that the Senate has a “built-in bias towards small states.”

“If you look at the Senate and how it’s weighted, rural voters literally count for about two and a half times as much as people in dense core cities like Atlanta,” Silver said. “That makes it really hard for Democrats to overcome other obstacles. In fact, the fact that Democrats actually control the Senate now is in some ways fairly lucky.” 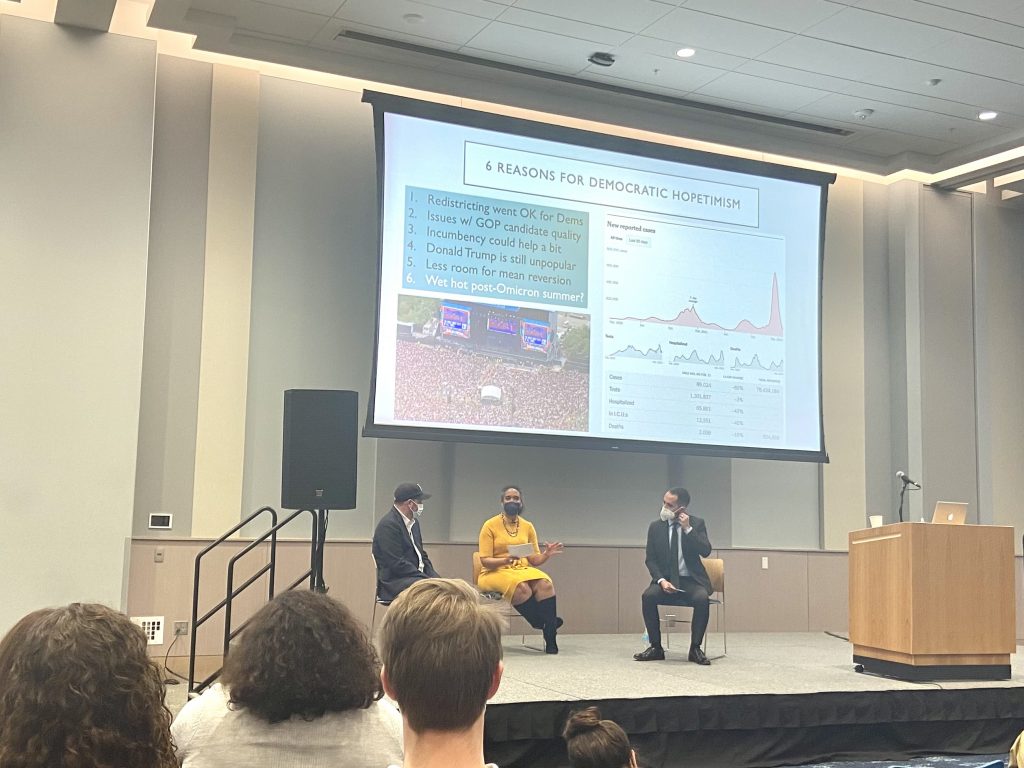 While Silver maintained that a Republican majority in the Senate is the most likely outcome, he adopted a viewpoint he called “hopetivism” during his talk to examine the possible ways in which the Democratic Party could gain an advantage in the Senate.

Additionally, Silver noted that former President Donald Trump’s influence over Republican politicians and candidates has led to a deterioration in “campaign quality” in the GOP.

“It used to be if you had a really bad candidate they might lose the purple to red state,” Silver said. “Now it kind of takes like a royal war — you have to literally be an accused pedophile. But still, at the margin, these things can matter a bit.”

In the event that COVID-19 variant cases continue to decline, which Silver humorously labeled “Wet Hot Post-Omicron Summer,” President Joe Biden could regain some of the support he has lost.

“Fundamentally, Joe Biden promised a return to normalcy,” Silver said. “So, maybe Biden gets a bit lucky with the levers, and then we’re able to have more normalcy now … that people thought would happen in 2021.”

Silver also noted that Trump’s commentary on Russia’s invasion of Ukraine, in which called Russian President Vladimir Putin “savvy” and called Ukraine a “great piece of land”, has divided Republicans.

“It becomes a quality issue where you’ve got Trump-endorsed candidates who sometimes are maybe not the candidate the average swing voter might like, so there are risks here for Republicans,” Silver explained.

Alexander Bolton, assistant professor of political science and a steering committee member of the Emory Votes Initiative, said speakers like Silver can help educate students about the stakes in elections.

Bolton said Silver was an important speaker for the Emory community because he has the background to “speak to the competitiveness of the elections coming up” and advise students on what they can look for in the news to inform their vote.

The event drew in students such as Benjamin Kinnard (27G), a first-year political science graduate student with a focus in American politics. Kinnard said the event presented an “interesting opportunity” to engage with other students interested in elections, as well as hear from Silver and Associate Professors of Political Science Bernard Fraga and Andra Gillespie ahead of the midterm elections.

Silver continued to address the possible effects the war in Ukraine will have on U.S. elections in a conversation with Fraga and Gillespie following his speech.

“Number one is that, historically, that there’s something called the rally around the flag event, which is that when there’s a foreign crisis, people become more patriotic and unify around the leader,” Silver said.

However, Silver noted that it is uncertain whether or not this effect will occur in the case of the invasion of Ukraine because the crisis does not directly involve a major U.S. ally.

In response to a question about how much candidates should rely on polling numbers, Silver said that historically newspapers have focused primarily on “horse race coverage,” asking “Who’s gonna win?” While he anticipates a similar focus to continue in the midterms, he said it’s important for voters to consider public reaction as well.

“I’m not sure you can necessarily shift that much from one bucket to the other, but people should understand the reason why people are interested in the horse race is because elections have consequences,” Silver said. “Understanding what it means if the GOP takes over one or both parts of Congress is also an important part of that.”’

The event was hosted by the Departments of Political Science, History, Sociology and Quantitative Theory and Methods, in partnership with the Emory Votes Initiative (EVI).

Hannah Joy Gebresilassie, executive director of Protect The Vote and EVI, said that Silver’s engagement with the Emory community can help engage students, faculty and staff in the upcoming midterm and primary elections.

“It’s really important to bring in someone like Mr. Silver who can weigh in on everything from pollings to data to information because it’s important that we go into elections informed,” Gebresilassie said. “As much as it is important to be registered, we also have to make sure we’re armed with knowledge … to really bring things together.

Emory Votes Initiative takes a non-partisan approach to campaigning for civic engagement. This aspect drew in students like Maura Toole (25C), who has interned with EVI since October.

“I have had an interest in politics, particularly around voting, for years,” Toole said. “[It] was really exciting to me to get the chance to learn from leaders here at Emory … and hopefully to better the Emory community here.”

The Emory Votes Initiative promoted collecting signatures for their pledge at the reception for the event, which asks Emory community members to sign once they register to vote, research candidates and issues and make a plan to vote. The pledge has garnered 65 signatures as of Feb. 25 and aims to collect 10,000 in the upcoming months.