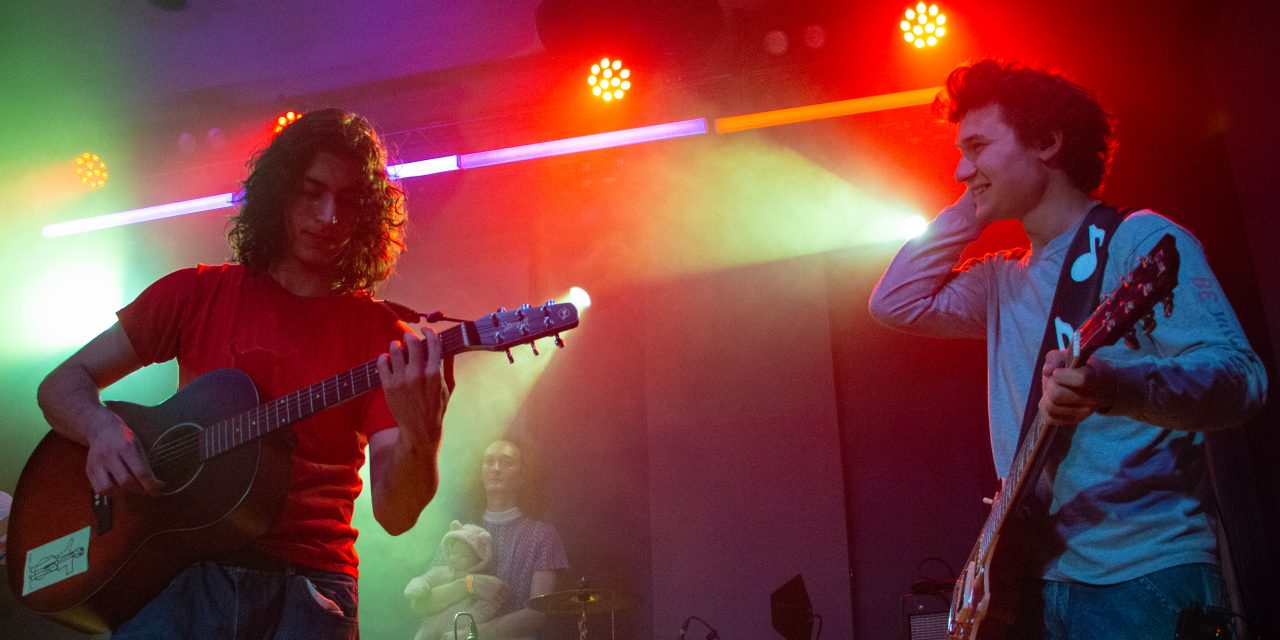 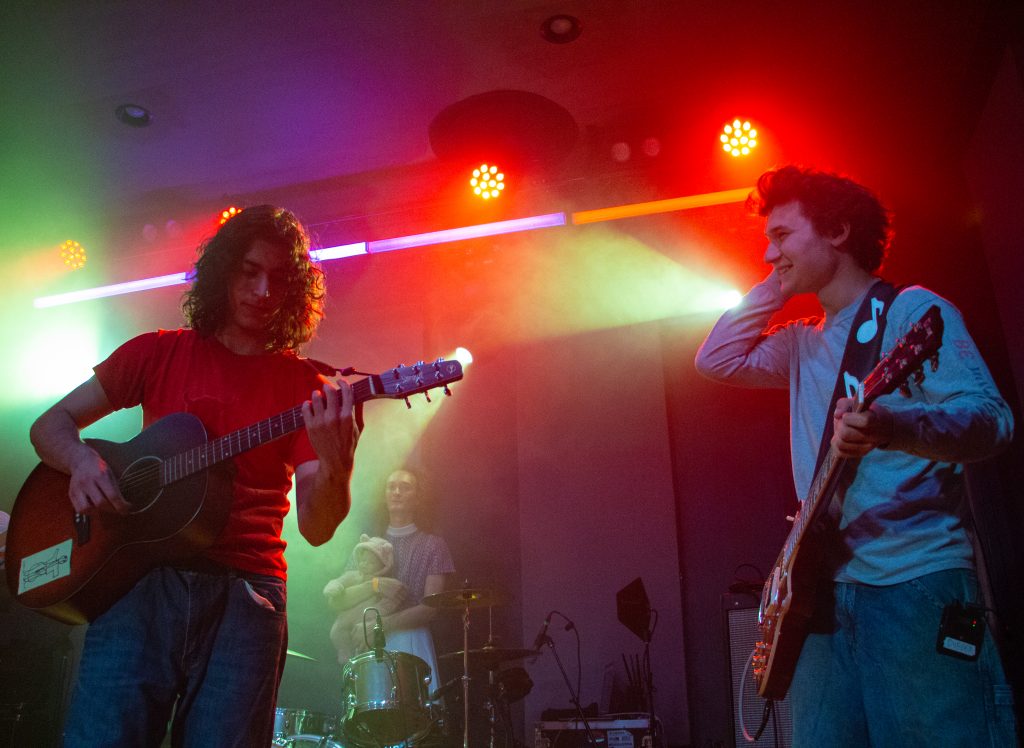 Three days before Laundry Day’s spring 2022 tour, I had the pleasure of sitting down with drummer Etai Abramovich and guitarist Henry Weingartner of pop-rock band Laundry Day over Zoom. Having just released their newest album “We Switched Bodies” Feb. 11, the band is making their way around North America (and later, Europe) for their third headlining tour.

We spoke as Abramovich walked back from thrifting in Long Island and Weingartner was driving back from the gym. It was amusing to watch as Abramovich made his way through the neighborhood and walked through a park.

“I don’t think I’ve ever been so excited for something in my entire life,” Weingartner said.  “We worked harder on getting the show together probably than anything else ever.”

Talking to these two felt like catching up with a couple of friends, partly due to our closeness in age, but also because the members of Laundry Day care deeply about making their fans, and anyone they talk to, feel comfortable.

While climbing an exercise gym at the park, Abramovich reflected on the atmosphere they aim to create in their live performances.

“We wanna feel relaxed, and we want the audience to feel included,” Abramovich said.

The New York-based band have been together ever since high school — which they graduated from in 2020 — and since then have garnered a dedicated fan base.

“We Switched Bodies” marks the beginning of a new era for the band. Having previously been an opening act for the likes of The 1975 and Clairo, these five musicians are no strangers to putting on a show or creating original work. However, in making this album, the band has demonstrated their ever-evolving skill and more confidently stylistic, cohesive sound.

Weingartner said that it was “the most intentional album we’ve ever made,” and that the public reception “has been amazing and very rewarding.”

The band made their way to Atlanta for the second time in their career March 13 to perform at Aisle 5 in Little Five Points. A significant group of fans formed a line outside the venue, which wrapped around the building. This venue was, in my opinion, a perfect one for this show — with a blend of intimacy and an aesthetic that complemented the band’s garage rock-esque vibe.

As I waited outside of the venue doors before the show began, I struck up a conversation with the first two people in line. They had been waiting for about three hours and had been to the band’s first two shows the nights before. A majority of those in attendance were of a younger demographic, all matching the pop-rock aesthetic of the show to come.   As became more apparent as the night progressed; the relationship and commitment fans have to Laundry Day is simply remarkable.

Out of the many concerts I have been lucky enough to cover, I don’t think I have ever been around such a kind and welcoming group. These fans don’t just love Laundry Day, but each other as well, and it showed throughout the entirety of the show. 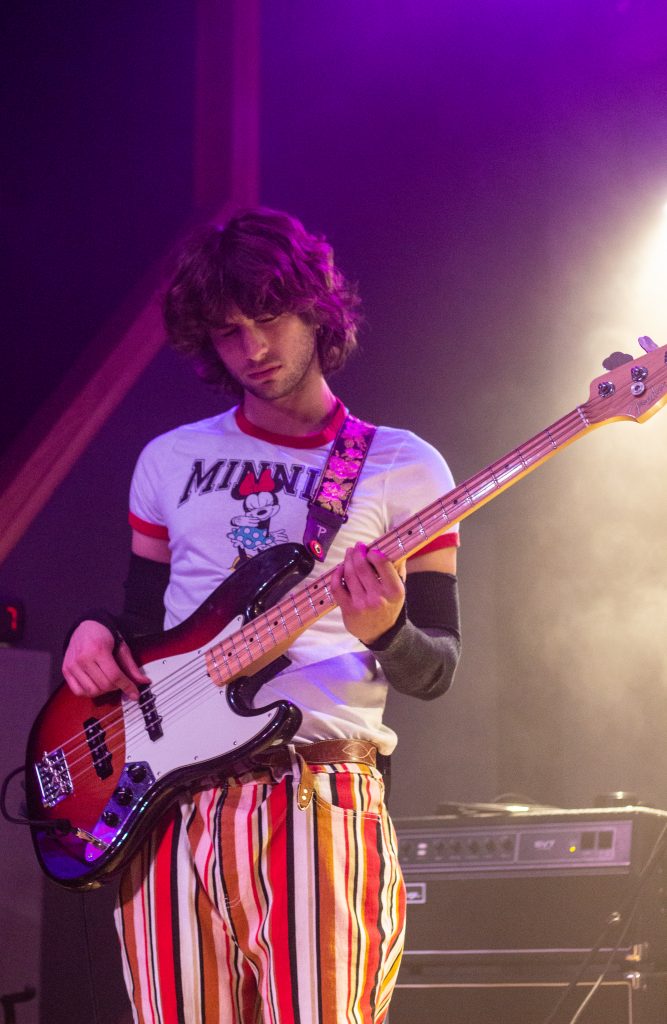 The concert began with the Florida-based opening act Driveaway. With music in a similar rock genre as Laundry Day’s, they set the tone for the vitalizing energy that filled the room for the rest of the night. The band looked like they were having an absolute blast on stage, with a performance chock full of dancing, grooving and engaging with the crowd. Even though they are a newer group, I found Driveaway to be the perfect opener.

After an incredibly strong start to the show, fans eagerly chanted for Laundry Day as they made their way onstage.The band’s style lies not only in their music but in their style as well, as each member came onstage in a highly personalized outfit. It was fun to see how each person performed in a physical encapsulation of their individual aesthetics. Sawyer Nunes, vocalist and guitarist for the band, donned yellow wide-flare pants that he revealed — after many prompts from the audience — he had bought at the Rag-O-Rama next door to the venue before the show.

Bassist Henry Pearl (known as “HP”) donned a Minnie Mouse-inspired fit, while Abramovich rocked a mini skirt and held a fake baby (whose name is Geesephine, by the way) in between songs. Weingartner entered the stage wearing a wrestling mask, alongside lead vocalist Jude Ciulla, who rocked a nineties-esque t-shirt and baggy jean combo. 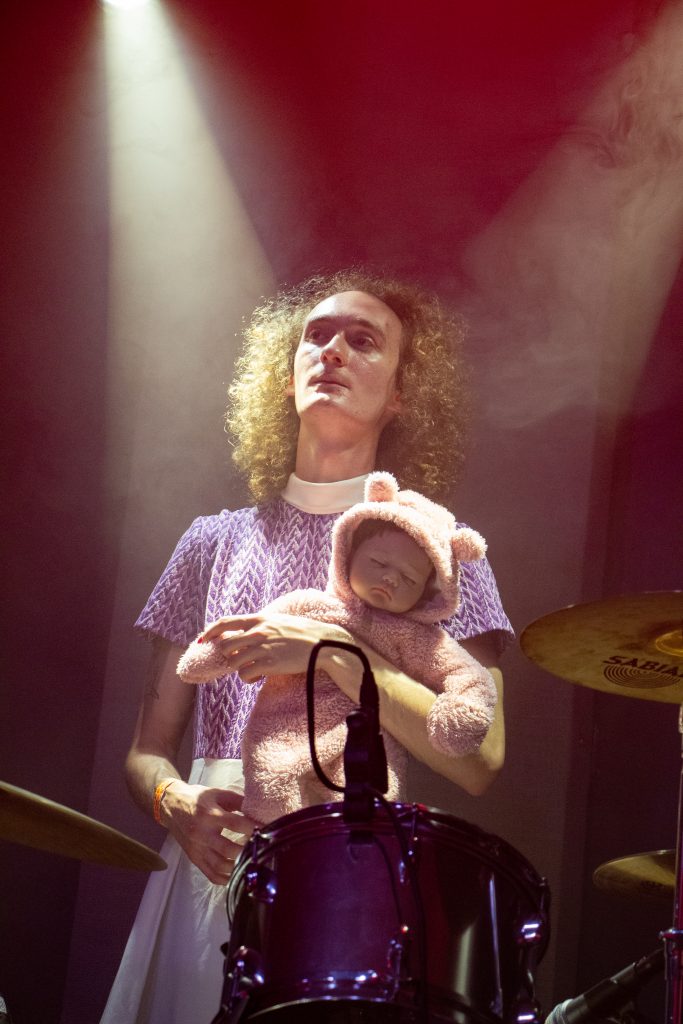 The band began with “Little Bird” off of the new album, and I was taken aback by the audience’s ability to sing along to every word, as the song had not even been out for a month. It was especially amazing to see the intimacy between the band and their fans in praxis. As the audience sang back each lyric to every song played, Ciulla lauded the fans for being so on point in their enthusiastic recall.

The band’s setlist was composed mainly of songs from their new album, though they also included older fan favorites such as “Lavender” and “Red Roses.”

It was satisfying to hear the contrast between the studio recordings and live performances of their songs. The live versions emphasize the technical and performance capabilities of each band member while also embodying more of the rock influences in their music. This unpredictability made for an incredibly dynamic show, keeping the fans constantly jumping on their feet.

In a quite hilarious interaction between a crowd member and the boys onstage, the band played “Harvard” after one fan yelled multiple requests in the silence between songs. Though it wasn’t an original part of their set, the group responded to her insistence and played what is admittedly my favorites, as the song introduced me to their music.

After being encouraged back onstage for an encore, the audience got to hear two more songs from the crew. “You should crowd surf!” a member from the audience called out as the band geared up for their (actual) last song. “Eh,” replied Ciulla, as the opening notes to “FRIENDS” began.

The show ended just as it began, with fans reciting every word to the music and hyping each other up when it all ended. Laundry Day was a spectacular show to attend and an even more spectacular band to have been able to interview. I wish these guys nothing but more success — and I have no doubt that their capabilities will only increase as time goes on.