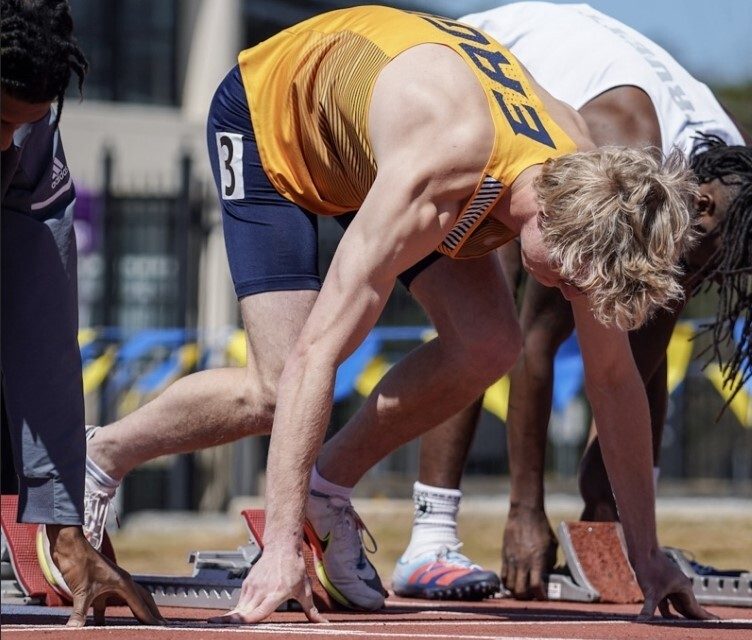 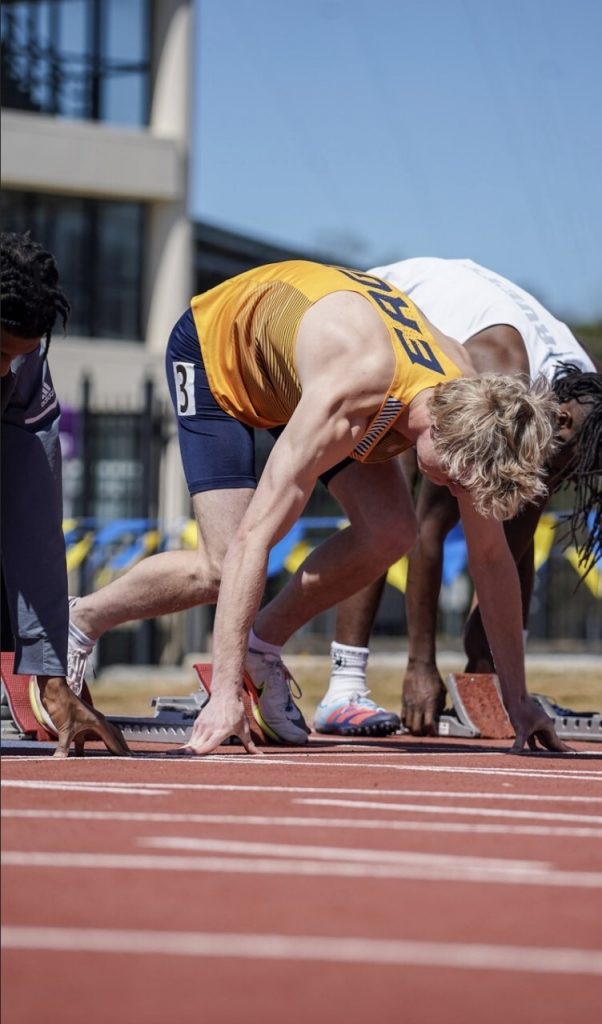 Freshman sprinter Jackson Price gets down into the starting blocks before he races the 100-meter dash at the Emory Thrills in the Hills meet on March 26. (Courtesy of Jackson Price)

Adrenaline hits freshman sprinter Jackson Price as he steps on the track before a race. He relishes in the jittery feeling. Walking onto the track turns Price, a self-proclaimed “mellow” guy, into an adrenaline junkie more than anything.

Price’s next moves are instinctual. He touches his toes and squats down before getting in the starting block, telling himself the same thing he does every meet — ‘get out of the block quickly.’ Price is fast enough to win if he can get out soon enough, and he has the records to prove it. ‘Just. Get. Out.’

Price’s thoughts are quiet with that one word. He takes in a breath and holds it, waiting for the familiar sound of the gunshot signaling the start of his race.

The shot rings out, and without a second to think, Price takes off.

Growing up, Price played everything, from soccer to lacrosse and baseball. But most of his time was spent on the basketball court, following in the footsteps of his father, who played NCAA Division I basketball at Denver University (Colo.).

And just like his dad, Price hates losing. He ran as fast as he could to win elementary school field day races or beat his third grade classmates in a game of football. Price joked that his competitive edge “runs in the family” — his grandfather and little brother are the same way.

“I’m going to give it my best effort because I want to win,” Price said. “It just helps me push myself.”

When Price, who is 6 feet tall, realizedreached the summer before his junior year of high school that heand was too short to continue basketball., Hhe decided to dedicated himself to track, which he had picked up two years prior to improve his basketball conditioning, instead.

Price hit the ground running. He started working with the club team Steadfast Track Academy, an athletic powerhouse that produces some of the country’s top collegiate runners. His former teammate, University of Southern California freshman sprinter Gavin Schurr, competed in the Olympic Trials.

By the end of his first year dedicated to the sport, Price qualified for the New Balance Nationals Outdoor Championships. The meet was canceled due to COVID-19, but Price was still motivated.

“Just qualifying and just training with those people helped me realize, ‘Oh, if I can keep up with these people, I can do this in college too,’” Price said.

The promise of a good education and athletic career drew Price to Emory University, and he committed shortly before his senior season.

“We knew, obviously, when we were recruiting Jackson that he was really talented, and he put up some very good times in high school,” head coach Linh Nguyen said. “[Assistant] coach [Derek] Nelson was very excited about getting him to campus.”

However, during his first meet of senior year, Price felt a shocking pain shoot up his calf — he had partially torn his Achilles tendon, taking him out for the rest of the season. Although he was disappointed, Price said being on the sidelines taught him that track is not an individual sport; he should run for his teammates, and when he can’t, he should cheer them on.

Price explained track has kept him sane during his first year at Emory. From the beginning, his days have revolved around practice, just how he likes it. But it took Price some time to adjust to his new environment, which both Nelson and Ngyuen said is expected for new collegiate athletes. With his Achilles almost fully healed, Price spent the majority of the fall semester with his team, preparing for their first meet on Dec. 3. However, Price missed the meet because he finished the semester virtually.

“I was very set on just running well and giving it the best of my abilities and being consistent,” Price said. “I think coming in and being even more so a team player… was a big thing for me too.”

When Price came back to campus, Nelson said he had a “renewed vigor and focus” for track. His training got more consistent as he shifted his focus to the weightroom, rebuilding the muscle he lost while injured. He sprinted head-first into the team culture.

“Now he’s really keyed in and he’s making connections with people on the team,” Nguyen said. “That’s helping him and others.” 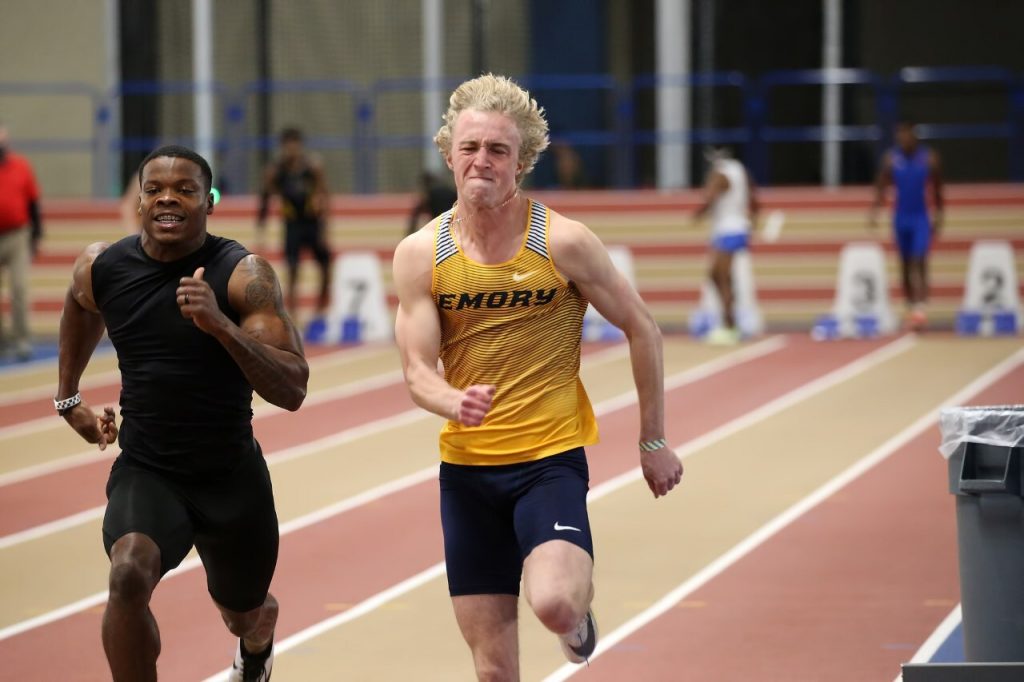 Price races the 60-meter dash at the Birmingham Crossplex during this year’s indoor track and field season. (Courtesy of Jackson Price)

And when Price stepped onto the track at his first collegiate meet on Jan. 16, he quickly made a name for himself. Price finished fifth in the 200-meter dash finals with a time of 22.37 seconds, tying for the tenth best time in men’s program history, and ranked fifteenth in the 60-meter dash semi-finals. Emory placed sixth in the 4×400 relay, which Price was also a part of.

“Obviously it wasn’t where I wanted it because of the injury and trying to get back, but I would say it was a good start,” Price said. “The coaches were happy with it and everyone was supportive about it. So I couldn’t complain.”

Price’s work paid off at the University Athletic Association (UAA) Indoor Championships. On Feb. 26, Price ran the 60-meter dash with a qualifying time of 7.02 seconds, securing the third fastest time at the meet and tied for the fifth best in program history.

Price did not just think he would win as he was warming up for the 60-meter dash finals, he knew he would. Price tells himself this while warming up before every meet: this is his race. He is going to beat the other athletes, and if he doesn’t, so be it. They just ran better.

“His mindset, that’s what propels him,” freshman sprinter Chris Belz said. “He thinks he can win any race and goes in with that mentality, and locks in more than most people I’ve seen.”

But when Price crossed the finish line of the 60-meter dash, he wasn’t confident that he won. He was neck-and-neck with another runner, and they stood on the side together, staring at the projected scoreboard while eagerly waiting for their final results. Five minutes passed before Price’s name was shown on top, winning with a score of 7.01 seconds — the fourth fastest time in program history.

“It was rewarding,” Price said. “It was nice to see. I had a lot of help with that too, with my parents and my physical therapist … so that was a big part of it.”

Price’s success continued as the team shifted into their outdoor season with two home meets in March. During the Thrills in the Hills Open, Price won first place in the 100-meter and 200-meter dashes, as well as the 4×400-meter relay. His 100-meter finish was historic for Emory’s track program — his time of 10.62 seconds in the preliminaries set a new program record, which Price broke again the next day after finishing with a time of 10.52 seconds in the finals.

Price ran with a tailwind during his record-breaking run, giving him a slight edge. Although Emory still counted his finish as a new record, his time doesn’t count towards national rankings because the wind was too strong. If it did, Price would be in first place.

With Emory’s record under his belt, Price hopes to beat his time without mother nature’s help next. His goal is to keep breaking his records.

But breaking the record individually was not the highlight of the day for Price, calling it a “nice add-on” to what he thinks track is really about — what he accomplished with his teammates.

Price ran as the anchor in the 4×400 meter relay, working again with graduate student Liam Fost, sophomore Dawit Dean and Belz. When Price took the baton for the final lap, Emory was in second place. By the time Price crossed the finish line, it was too close to call. Price immediately walked off the track and sat down next to his bag, thinking the race had ended in a tie. But a minute later, his teammates surrounded him, telling him he had won. Price had pulled them ahead.

“It’s rewarding to be like, ‘I did this for you guys,’” Price said. “When you’re running for teammates, it’s a whole other thing.”

As he looks ahead to the rest of the outdoor season, Price hopes to keep breaking records and win the 100 and 200-meter dashes, as well as the 4×100 and 4×400-meter relays, because every time he wins, he helps push his teammates one step closer to winning a conference championship.

“Having them push me to do the best I can, obviously it’s paying off for me and for them,” Price said. “The group effort of everyone going into it is probably the most rewarding.”