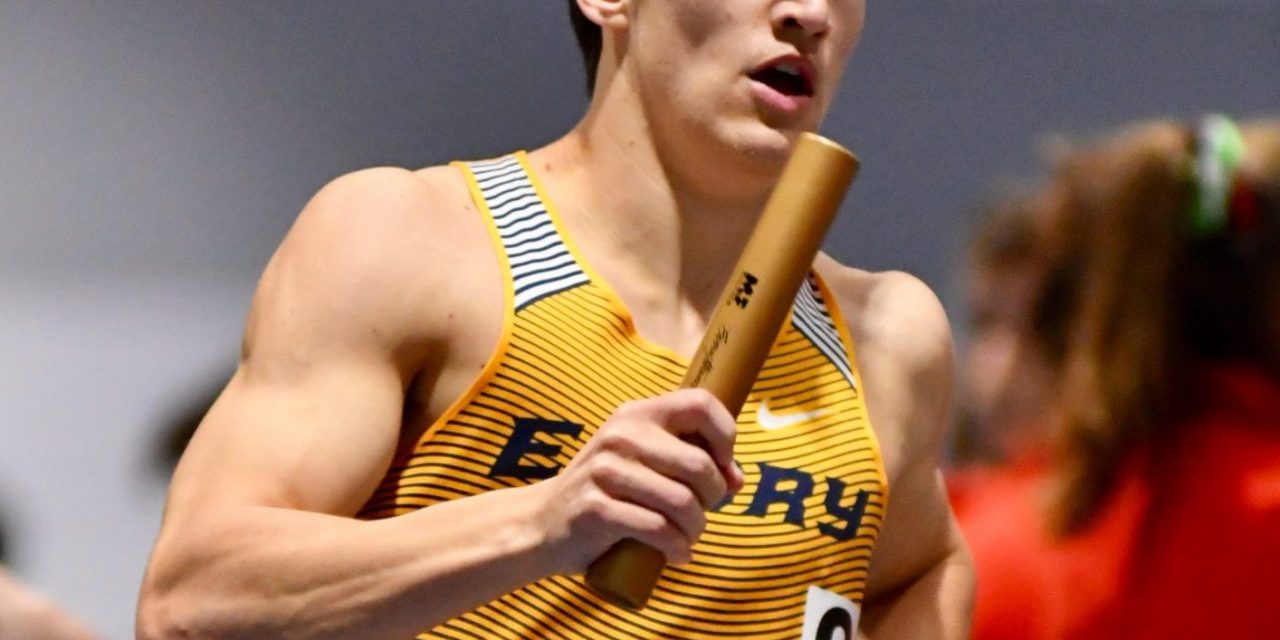 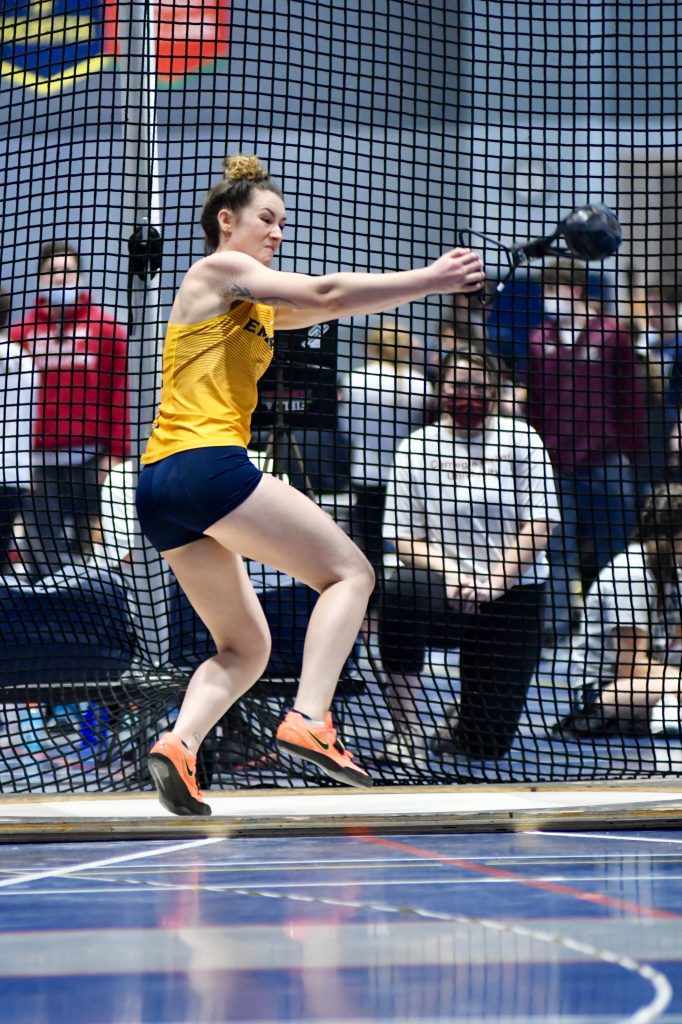 Alex Devaux competes in the weight throw at the University Athletic Association Indoor Championships on Feb. 26. (Courtesy of Jonathan Fulkerson)

Notable placings include senior Brett Henshey who tied for second in the high jump at the 1.89-meter mark and sophomore Kenya Sei who earned third place in the weight throw with a 15.58-meter toss. For the running events, first year Jackson Price won the 60-meter dash with a time of 7.01 seconds and placed second in the 200-meter dash with a time of 22.35. Graduate student Liam Fost captured the 400-meter title in 49.12, and senior Thomas Perretta turned in a 1:55.46 run in the 800-meter race to finish third. The 4×400-meter relay team of first year Chris Belz, sophomore Dawit Dean, Fost and Price earned third place with a time of 3:23.17.

On the women’s side, first year Sarah Fineman placed second in the shot put with a 12.11-meter throw. Senior Alex Devaux took the top spot in the weight throw, and her 16.23-meter throw was a program record.

Although Devaux was aware that it would require a career-best effort to top Paris Wagner’s (19C) record of 16.20m set in 2019, she said her confidence never wavered.

The last time she competed in the event at the UAA championships was in 2020, when her 15.09-meter throw, a personal best at the time, earned her second place. Devaux credited her impressive improvement to her focus on her “mental game” and the support from her coaches, friends and family who were in the stands to witness her historic achievement.

“I’m not going to look back on this and just remember how far I threw,” Devaux said. “I’m going to remember the people that were there and the energy in the room. [Head coach Linh Nguyen] has been really helpful in just helping me reconceptualize and feel confident in my ability to throw, but also knowing that that comes from having a positive team atmosphere.” 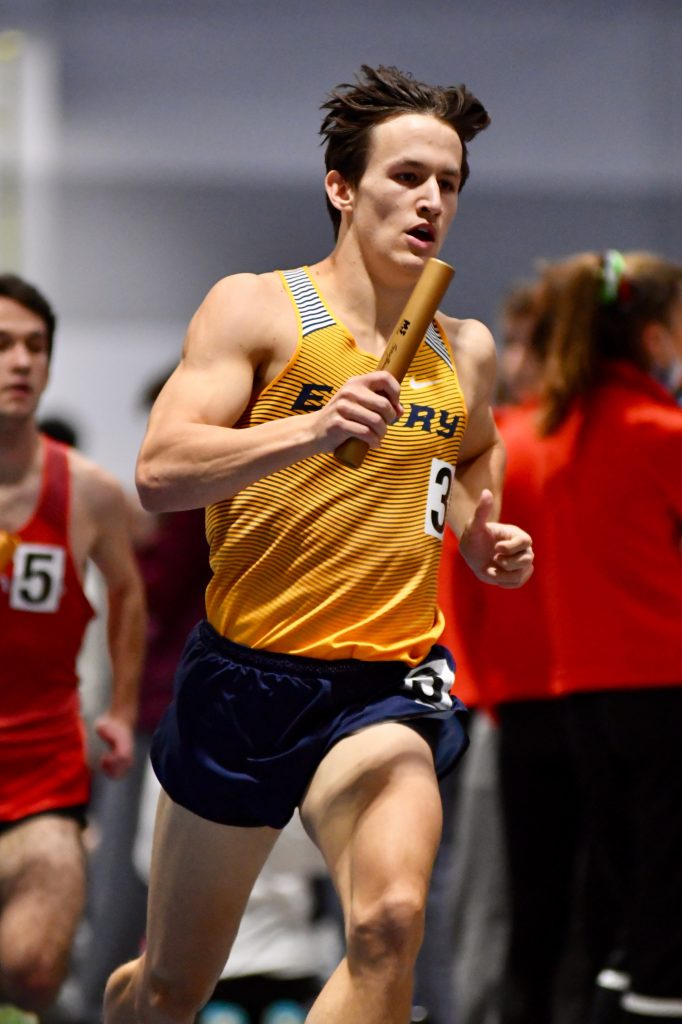 The indoor season was also historic for sophomore Spencer Watry, who has broken three school records this year. At the South Carolina Invitational in January, Watry won the one-mile race with a time of 4:11.51, barely surpassing the previous record of 4:11.55 set by Max Brown (18C) in 2018. Two weeks later at the David Hemery Valentine Invitational, Watry again jumped to the top of the leaderboard after running the 800m in 1:51.95, and participated on the distance medley relay (DMR) team that crushed the event’s previous record by eight seconds with a time of 10:02.27.

Given that Watry rarely ran the mile prior to this season, beating Brown’s record came as a welcome surprise, especially since he had run the same event around seven seconds slower two weeks earlier.

“It was kind of a shock when I crossed the line,” Watry said. “But once I ran that, that gave me a ton of confidence that I could go for the 800[m] indoor record, and then also the DMR.”

Although Watry knew he had a chance to break the 800m and DMR records heading into those events, he said that he concentrates on staying competitive with the runners around him rather than hitting personal bests as he walks up to the starting line.

“[Nguyen] doesn’t really want me to think about times,” Watry said. “Usually that’s always in the back of my head, but the number one thing is just competing with those around me. In both races, I won. It wasn’t like I just got dragged along to a fast time. I think just having a competitive mindset allowed me to push myself super hard in those races and run to my fullest capabilities.”

Like Devaux, Watry’s training approach has changed a lot since last year. He has increased his weekly mileage by about 25 miles while still maintaining his “top-end speed,” and he said that the combination of those two skills has contributed greatly to his success during the indoor season.

“That big aerobic boost pushed me up events and helped me out a lot in the mile,” Watry said. “It also helped out in the 800[m], because although it’s shorter and quicker, it’s still a very aerobic event. Having that strong aerobic engine, I don’t get tired as fast.”

Athletes on both teams will learn next week whether or not they qualify for the NCAA Division III Indoor Championships on March 11-12. In the meantime, most of the team is preparing for the upcoming outdoor season, which commences with the Emory Spring Break Classic on Mar. 18-19. The Eagles are returning several athletes who competed at the 2021 NCAA Outdoor Championships, including senior Jessica Barbarosh (4×100-meter relay), Henshey (high jump), senior Hannah Lansberry (4x100m relay) and junior Annika Urban (5000-meters).

Devaux said her goals for the upcoming outdoor season include surpassing the 50-meter mark in the hammer throw and breaking the Emory women’s hammer record of 52.50m set by Danielle LeSure (02C) in 2002 while maintaining the positive mindset she cultivated during the indoor season.

“I’m definitely just looking to stay in the same mindset that I was able to access for the weight [throw] of feeling thankful and appreciative the entire time of what I’ve been able to accomplish,” Devaux said. “Anything else that comes my way is just icing on the cake at this point.”

Watry, who is currently recovering from an injury that hindered him at the UAA Championships, said that he hopes to redeem himself with strong outdoor performances to earn him a berth to nationals. He said that the support of his coaches and the cooperative atmosphere with his teammates will make recovering and achieving his lofty goals much easier.

“Having such a good team culture [is helpful],” Watry said. “Everyone around [me] is just as motivated as I am, works just as hard as I do in practice. That just makes it a lot easier to go through the process of training really hard and trying to get better.” 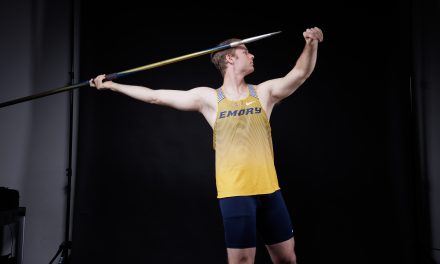